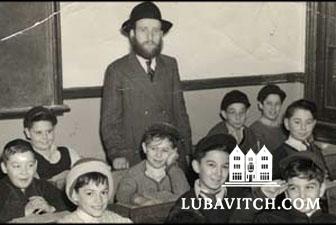 The Chabad-Lubavitch community at large mourns the passing Monday, of a notable figure in the annals of Chabad. The youthful years of Rabbi Tzvi Yosef Kotlarsky, who passed away at 91, reflect a transitional period of the movement during the critical WWII years.

(lubavitch.com) Rabbi Tzvi Yosef Kotlarsky, who fled the Nazi invasion of Poland via Lithuania and Imperial Japan, and went on to serve as chief administrator of the United Lubavitch Yeshiva in Brooklyn, passed away Monday in Brooklyn, NY. He was 91.

Tzvi Yosef, known as Hirschel—the Yiddish diminutive for the Hebrew Tzvi—was born to Yaakov Dovid, a shochet (ritual slaughterer), and Nechamah Devorah Kotlarsky in Kronenberg—a small resort town in interwar Poland. The Chasidic warmth and fervor for Judaism that his parents, followers of the Rebbe of Kotzk, imbued in the young Hirschel would stay him heed throughout the rest of his life. When the family subsequently moved to GÅusk, a small suburb of Lublin, he was enrolled in the local cheder, grade school.

Hearing of the famed network of Lubavitcher Yeshivas in Poland, Hirschel was sent to Warsaw to attend Tomchei Temimim—the local Chabad run secondary school. Though a short time later, at the age of 14Kotlarsky would return to his hometown to learn with his brother, the time spent in Tomchei Temimim would sow the seeds of a lifelong relationship with the school, the Chabad Chasidic philosophy and its leaders—the Lubavitcher Rebbes.

After immersing himself in the study of the Talmud and its vast commentaries, Hirschel enrolled in the famed Chachmei Lublin Yeshiva. Under the auspices of  Rabbi Meir Schapiro,  the renowned scholar and founder of the Daf Yomi system—the widely practiced regimen of daily study through which the entire Talmud is completed in a little over seven years—the students worked on mastering the Talmud. The Yeshivah, the largest and most modern of its time, housing hundreds of students and over 100,000 books, boasted a demanding curriculum and required the memorization of 400 folios of the Talmud to gain admission. Though he was enamored with deep lectures of  Rabbi Schapiro, and the the Yeshivah in general, Kotlarsky returned to the Lubavitcher Yeshivah system.

The higher-level Yeshivah in Otwock, a small town near Warsaw, was also the home of the Sixth Lubavitcher Rebbe, Rabbi Yosef Yitzchak Schneersohn. The Rebbe had relocated there from Warsaw in 1936 to escape the hustle of big-city life and to take advantage of the local sanitariums for his weakened health. One of only eight students to gain acceptance to the yeshivah that term, Kotlarsky was amazed at the dedication of the students to their studies—he would later recall the bustling study hall, full even during the wee hours of the mourning.

As the world looked on with growing apprehension at the rapidly growing Nazi war-machine, Poland began to brace itself for potential conflict on its various borders. In 1938, Kotlarsky was drafted into the Polish army’s cavalry division, and sought the blessings of the Sixth Lubavitcher Rebbe before departing to the Russian border. Shortly before the outbreak of the Second World War, Hirschel's division was transferred to the German border. When the Nazi Blitzkrieg invasion began on September 1, 1939, the chaos of the attack scattered the Polish forces, separating Kotlarsky from his unit.

Making his way east to escape the German front, Kotlarsky eventually found a fellow student from the Yeshivah. The Soviets had reinstated Vilna as the capital of Lithuania, and there was some hope that newly empowered Baltic Republic would offer greater protection against the German forces. Thousands of Jews fled to Lithuania, amongst them Kotlarsky and other Yeshivah students from Otwock—who relocated to a satellite branch of Tomchei Temmim.

The respite in Lithuania was short lived, and the students of Tomechei Temmim, along with those of the Chachmei Lublin and Mirrer Yeshivos, were forced to flee once more from the encroaching clouds of war. Help this time came from an unexpected source: Chiune Sugihara, the Japanese diplomat who served as Vice-Consul in Kaunas. Issuing thousands of transit visas, Hirschel and other students were able to leave -crossing Russia and the vast Siberian Steppe to the Eastern port of Vladivostok and on to Kobe, Japan.

Unable to deal with the large influx of refugees, the Japanese transferred them to the then annexed Shanghai, China where the students of Tomchei Temmim began to once again set up a yeshiva and some semblance of their old lives. Eventually, Kotlarsky and eight of the other senior students were able to acquire visas to Canada. Crossing the Pacific, the nine world weary refugees hoped that perhaps upon arriving in North America they would be able to travel from there to New York to see their Rebbe. The Rebbe, however, instructed them to establish a Yeshivah in Montreal. Despite opposition from various parties, and an offer by the famed entrepreneur Samuel Bronfman to relocate to Toronto, Kotlarsky and his friends persisted in their mission.

Recruiting many Jewish refugees who had arrived in Montreal, Kotlarsky was in charge of the Kerem Yisroel Talmud Torah, an afternoon program established to provide supplemental Jewish education to children attending public schools. Though the numbers were at first first small, they soon counted over 500 students.

After an initial visit to the New York in 1946, Kotlarsky soon settled in the Crown Heights neighborhood of Brooklyn, where he was introduced to his future wife, Goldie Shimelman. Goldie would go on to be his steadfast partner until her passing in 1989. Working to help rebuild the world he saw so cruelly destroyed, Kotlarsky dedicated the next 50 years of his life to education—working as administrator of the United Lubavitch Yeshiva campuses in the Crown Heights and Flatbush areas of Brooklyn.

A dedicated family man, he sought to provide the same warm Chasidic home he had grown up with as a child for his own family. Looking back in awe, his son, Rabbi Moshe Kotlarsky, recalls the great care his father applied to the very minutiae of Chasidic custom and practice, even during his failing health in later years,

"My father was meticulous in his fealty to Torah and mitzvahs, exerting himself even at the very end to honor the details in the observance of Jewish and Chasidic custom, no matter what pain or discomfort it may have caused." His daughter, Chani Shemtov, a Chabad representative to Arizona, says that her father never spoke about the horrors in Poland that ultimately annihilated his entire family, save a single brother. Instead, he looked with humility and gratitude to the future that had come from him—appreciating a poetic justice and redemptive peace in the faces of his many grandchildren and great-grandchildren.

“My grandfather,” says Chana Wolowik, Chabad representative to Five Towns, NY, “would look around at his children, grandchildren and great grandchildren with glowing pride and say, ‘Jacob looked to G-d with thanks for the great multitude he had brought forth saying, ‘For with my staff I crossed this Jordan and now I became two camps.’ Yet I did not even have a staff, and look what I'm blessed with today.”
Passing away only a week after his 91st birthday, Rabbi Yosef Tzvi Kotlarsky  is survived by his children, Rabbi Moshe Kotlarsky, Vice Chairman of Merkos L’Iyonei Chinuch, Rabbi Mendel Kotlarksy, Chumie Hershkop, Esti Wilshansky, Suri Perlman, Freidel Hershkowitz, and Chani Shemtov; and numerous grandchildren and great-grandchildren, many of them Chabad emissaries stationed around the world