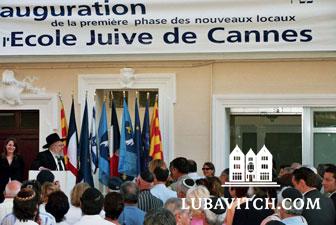 At the inauguration of the new Jewish School in Cannes. (photo: luavitch.com/LNS)

(lubavitch.com/LNS) Hundreds of guests, among them political, civil and religious figures, participated in the inauguration earlier this week of the new Chabad day school building in Cannes, France.
« Chabad changed the city, » said Bernard Brochand, Cannes’s Mayor, standing alongside Rabbi Yehuda Leib and Mrs. Matusof, and their son Rabbi Mendel Matusof.
The school, founded in 1998 as a preschool grew steadily, and after only two years Chabad of Cannes opened an elementary school. But the demand for larger facilities quickly became apparent, with growing numbers of parents seeking to enroll their children.
The new building, formerly a print house, was designed by Bernard Espla, a respected French architect.
The inauguration was followed by a Gala dinner at the prestigious Palm Beach hall, well attended by friends and supporters of Chabad of Cannes and Nice.