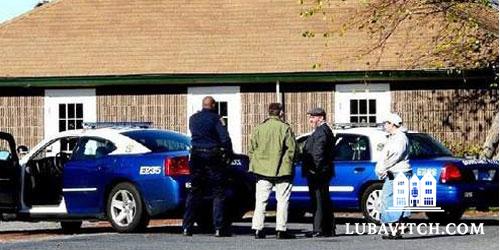 (lubavich.com) Three youths will be arraigned Friday morning in connection with Tuesday’s break-in at the Chabad Jewish Center of Cape Cod. The local teenagers are accused of vandalizing the synagogue, pulling a charity box off the wall, smashing doors, and throwing phylacteries on the floor. Especially disturbing to the center’s rabbi and the broader community was the overt message the teens left in their wake.

When the break-in was discovered Wednesday, images of Adolf Hitler were displayed on each computer screen. Anti-Semitic literature was strewn around the building.

“This was not a break-in to steal money,” insists Chabad’s co-director Rabbi Yekusiel Alperowitz. “It was kids violating a Jewish center precisely because it is a Jewish institution. They wanted to, and did, make a complete desecration.”

In the 15 years since Alperowitz has lived in Hyannis, Massachusetts, the building has been desecrated only once. Seven years ago, a swastika was emblazoned on the school’s playground. The center does have an alarm system in place, and plans are underway to add additional security measures including motion-detector cameras.

Community members, both Jewish and non-Jewish, have come forward to “express their support and distress over our situation,” says Alperowitz. The rabbi received calls from the town’s councilman and manager, inviting him to a meeting this afternoon and requesting he speak at the council meeting tonight.

Alperowitz plans to address the topic of proactive education this evening. “There is a real need for education in our school system,” he says. “We must teach parents and children alike the importance of respecting religious and cultural institutions. Such actions should be intolerable.” The arrested teens are students at the high school across the street.

Hyannis is home to a loyal Jewish community whose numbers swell in summer months. Prayer services for Shabbat are scheduled to proceed as usual this weekend.