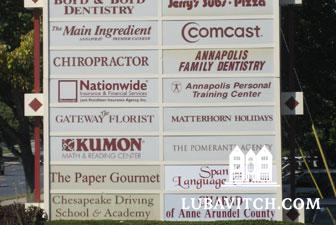 Next month’s meeting between Secretary of State Condoleezza Rice and Israeli Prime Minister Ehud Olmert will turn international media attention to Annapolis. But one Jewish community in the city is enjoying a different focus.

Anne Arundel County in Annapolis is one in a new generation of Chabad centers opening in smaller cities and suburban outposts nationwide. Only a reasonable drive from Baltimore’s big time Jewish population, it’s way too far for most families busy with careers and carpools to establish ties.

Rabbi Nochum and Hindy Light, youngChabad representatives to Ann Arundel, moved their Chabad outfit out of their basement and into a 1,850 square foot space in time for Rosh Hashana. On the second floor of a commercial strip, the new synagogue shares parking lot space with Comcast’s regional office.

In the rush before the holidays, the Lights and their community arranged their chairs into the rows and placed the bima, reading table, in the center, making the office space look much more like a place of worship. With pride, they placed a newly donated Torah, with a link to Chabad-Lubavitch history, into the ark.

“He [Rabbi Light] is very, very endearing,” said Fine Foer. “Matthew kept saying how awesome it was to have a young male teacher he could relate to, who wouldn’t stifle his questions.”

Bringing Matthew for lessons gave Fine Foer an opportunity to get to know the entire Light family. “Hindy and I would talk about the parsha, about what was going on in our lives,” she said. Now, a year after the bar mitzvah, Fine Foer, an artist, still stops by to play with the Lights’ children and hang out. Rabbi Light’s teachings inspired her latest work “Entertaining the Sacred,” which will be included in Maryland State Arts Council’s 40th Anniversary show.

Child by child, friend by friend, a community of doers is coming together around the Lights. When they were out to dinner with community members Stuart and Nancy Schoenburg, the conversation – as is wont when dining with a Chabad couple – turned to Torah.

Before the next course was served the Schoenburgs had decided to pledge a significant sum toward the purchase of a Torah scroll for Chabad.

Feverish work to raise the rest of the cost over the summer ensued. Several weeks before Rosh Hashanah, while final negotiations on the synagogue space were being hashed out, Chabad of Anne Arundel welcomed a 150-year-old Torah. The scribe who wrote it lived close to the Russian city of Lubavitch, the namesake and former headquarters of Chabad-Lubavitch.

Close relationship with community members will not be diminished now that the Lights have an official synagogue. “We are always looking to grow in numbers, but our first priority is our personal relationships,” said Mrs. Light. “You can make an event or a place as fancy as you want, but it means much more to call someone on their birthday, to focus on their needs.”

Jennifer Laszlo Mizrahi, founder and president of The Israel Project a non-profit based in Washington, D.C. and Israel, brought her son Max, 6, to the Lights in hopes of seeing him master the Hebrew alphabet. The Lights added context to their language lessons.

“The Lights are amazing, amazing people… Some of Max’s most prized possessions are his stuffed toy Torah, the shofar he made, and other Jewish things from the Chabad events he attended,” she said. “In a community with few Jewish options, [the Lights] meet Jews where they are – and make it fun.”