Chabad at University of Wisconsin Wins Motion To Expand 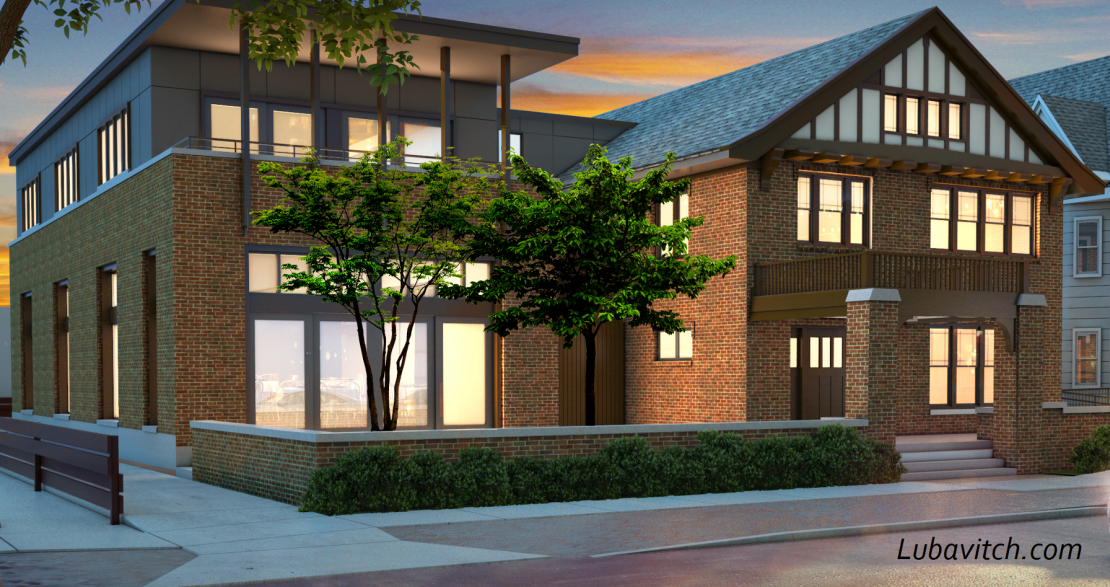 It was a textbook case of competing values.  The need for vibrancy and growth vs the desire to preserve the historic came head to head when Chabad at the University of Wisconsin sought permission to demolish an old house on its property.

No one could say how the City of Madison’s planning commission would finally decide the motion. Chabad bought the vacant, decaying structure in 2012 with the intention of removing it to make room for an expanded student center on the adjacent property. Standing in Madison’s National Mansion Hill District, the two-story Queen Anne style structure was not landmarked. But the Gage House was built in 1883 and held some historic interest, prompting objections to its removal.

Years of discussions between Chabad’s campus reps Rabbi Mendel and Henya Matusof, local and city historic preservationists and area neighbors followed the motion. Finally, after many architectural revisions to the proposed expansion of Chabad House that would satisfy zoning requirements and other concerns, the issue came up for a vote on August 29, shortly before the start of the new school year.

Both sides presented, each arguing the merits of their position. While some bemoaned the loss of a historic home to new construction, neighbors spoke of Chabad’s stabilizing presence, an oasis of family values and spirituality in the middle of a rowdy, chaotic campus setting. It was finally the remarks by students–some who waited four hours for their turn to speak–that moved the members of the commission to put their support behind Chabad. By evening’s end, when the ayes and nays were registered, all but one voted in favor of the recommendation.

Samantha Kerstein, at senior at UW, recalled her anxiety when she arrived as a freshman from Philadelphia. “Wisconsin was a long way from home. I didn’t really know anyone at all and when I got here I found Chabad. Chabad for me was not just a place where I could explore my Jewish heritage and culture but a place where I felt at home. Mendel and Henya both made me feel safe, secure, comfortable, and they really helped me get through that time.”

Her sentiments were echoed by other students. Zachary Erlichman, another senior, spoke of the bond students form with Mendel and Henya and their young children right on campus. “Mendel taught me leadership, how to foster a community.  I think these are all really important qualities that we don’t get to focus on as undergraduates as much; we don’t get to think of some of these bigger questions while we’re figuring out which midterm we have that week.”

Though members of the commission expressed profound regret at the loss of a historic resource, they noted the  unusual circumstances of this case that set it apart from the routine business of new construction for profit. The Matusofs were seeking permission to build a family center, not for their own self-interest, but as part of their mission, in the service of Madison’s campus community.

“This has been a difficult decision,” said Alder Sheri Carter. There’s always a justification for demolishing our historic buildings. There’s always going to be someone saying that this is going to be for the greater good. But I was moved by Rabbi Mendel and his statements and comments, and the students who came and talked about their support for this, so I’m going to throw caution to the wind and support this motion.”

The decision allows Chabad to remove the house and build a Tudor-style extension that will be, in the words of one alderman,  “a stabilizing and far superior building” as an extension to the Rohr Family Chabad House at 223 Gilman. The new construction will give students 10,000 sq feet of space over the current 4,000, with an assembly hall large enough for 250, a commercial kitchen and other facilities. Construction is set to begin this fall, as the $3.5 million campaign, which kicked off with a lead gift by the Goodman Foundation and the Rohr Family Foundation, meets its target.