Chabad at University at Madison, Wisconsin, To Open New Building on Campus 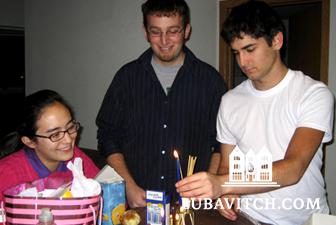 Recently, a young UW student approached Chabad's Rabbi Mendel Matusof with a request for private study sessions. The student’s father had studied a book in college that “gave him enthusiasm for Judaism ever since,” and the student wanted to try it out.

The book was Tanya, the central text of Chabad Chassidic philosophy. The rabbi who taught it was Rabbi Yona Matusof.

Presenting authentic Jewish experiences is a Matusof family tradition. Rabbi Yona Matusof, Chabad’s representative in Madison, WI, worked with UW students a generation ago, and the repercussions of his work are still in evidence.

Now come May, Chabad at UW will have a lot more space with a bigger building, and the opportunity for greater influence will grow.

With the help of a significant grant from the Rohr Family Foundation, the Matusofs purchased the building where they currently rent space. Not only is the 3,500 square foot building housed in an attractive 1925 Tudor, it's a great location, according to Rabbi Matusof.

"Within a three block radius there are 2500 Jewish students."

Adam Poster explains why Chabad at University of Wisconsin-Madison needed to buy a building to expand its program space:

“If you have a choice to test drive a Ferrari or a beat up 1974 Volkswagen Beetle, which would you drive?” said Poster with a metaphorical flourish worthy of the English major that he is.  The Shabbat dinners hosted by Rabbi Mendel and Henya Matusof offer a serious joyride through Jewish traditions.

“Even if you do disagree with ideas within Judaism, it’s hard to deny the authenticity of what they are doing. It gives me a preview of the Shabbat dinner I want to do when I get older.”

Three years of serving up warmth, acceptance and “ridiculously good food,” in senior Jacob Tarica-Lechter’s words, is why elbowroom is hard to come by in the Matusofs’ current space. “I spend Shabbos with Chabad and be around people who totally enjoy Judaism and enjoy being Jewish, which is not a common thing in a university,” he said.

And then there are some Shabbat nights that attract upwards of 60 students compelling the Matusofs to offer standing room only Shabbat meals with buffet tables around the perimeter of the living room.
The establishment of the Rohr Jewish Student Center is an important, timely step. As of this year, UW's total Jewish student population is estimated to be around 4000. Several weeks ago, the university opened a brand new kosher kitchen and residence, a move sure to draw more Jewish students in semesters to come.

At UW, Jewish students tend to flock to a select group of apartment buildings, making it both easier and harder to reach them, according to Rabbi Matusof. Clustered communities can be closed communities, but as can be seen from Chabad’s Chanukah plans, they’ve made significant inroads.

For starters, Chabad will be distributing 700 menorahs and lighting a giant menorah in Library Mall. Night number three is a Chanukah deli party. The Matusofs have been invited to guest host an AEPi Chanukah House party. They’ll be bringing latkes and dreidels for drop in parties at the Jewish sororities. Then there’s the Chanukah themed Shabbat dinner.

To what end is all the holiday hubbub? “To have as many kids as possible light the menorah,” said Henya, “and to identify a Jewish holiday with a positive experience, to feel pride as they walk on campus and see the menorah.”

For some, that will wrap up their Chabad experience, but a growing number are turning to Chabad for Jewish study. One of their most popular classes is “Feminists through the Ages,” taught by Henya, that shakes up the stereotypes about Jewish women.

Talia Kohn is one of the many students who’ve taken up Chabad’s offer for one on one weekly study sessions. “Weekly private learning sessions with Henya have been a bright spot in my Mondays.”

“I came into Chabad very wary of religion.  Chabad helped me discover Judaism on my own terms,” Kohn told Lubavitch.com.