Chabad at AIPAC: A Capitol Experience 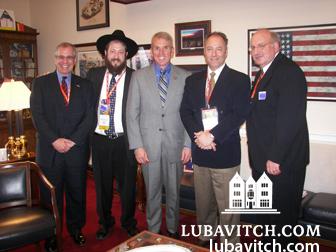 (lubavitch.com) Chabad representatives from around the nation were among the 6500 guests at this year’s AIPAC Conference, which concluded Wednesday, in Washington D.C.

“Lobbying for the security of the people of Israel was, for me, an important part of the convention. I was happy to do that; I felt that I was doing something. Though politics is not my realm, I truly gained a lot," said Rabbi Elazar Green.

Rabbi Green serves the communities of Lancaster and York, Pennsylvania and the Jewish students of Franklin and Marshall University. He attended the conference for the first time this year at the behest of a close friend and community activist, Elliott Weinstein.

“I invited him because he’s the rabbi,” says Weinstein, a commercial real estate appraiser. “It is important for the general Jewish community to see Chabad’s presence. We are all Jews, one people with one heart. It’s good to remind ourselves of that occasionally.”

While in Washington, the two met with local congressmen, Todd Platts and Joe Pitts, who, says Weinstein, “heard our cause and understood our position.”

“The world’s a mess,” he says. “We must get Congress to understand what we understand.”

Part of Rabbi Chaim Bruk’s enthusiasm about his first foray into AIPAC, was the opportunity to learn about the true nature of events in Israel. “I obtained a lot of information to share with the Jewish and non-Jewish population of Montana, to counteract the biased media’s distortions,” says the Bozeman rabbi. “I see myself as an ambassador to educate the Jewish people about the importance, holiness, and beauty of the land of Israel.”

Bruk participated in most of the sessions as well as an exclusive Synagogue Initiative Lunch with 200 rabbis and cantors. He was particularly interested to hear from Michael Oren, Prime Minister Benjamin Netanyahu’s choice for Israel’s next ambassador to Washington.

During his speech, Oren referenced his relationship with Chabad. Speaking later with Rabbi Bruk, Oren told him that as a teenager living with his family in New Jersey, he’d spent two years studying with Chabad’s late Rabbi Sholom B. Gordon of Maplewood, New Jersey. Oren’s father, Lester Bornstein was executive director and a member of the board of trustees of Newark’s Beth Israel Medical Center, where Rabbi Gordon served as chaplain for many years.

In addition to the sessions for synagogue affiliates, more than 1,000 young political activists participated in private functions. Greeting them at a reception May 3rd, were representatives from several Jewish campus organizations, including Chabad, Hillel, and the Jewish fraternity of North America, Alpha Epsilon Pi.

Rabbi Yossy Gordon, Executive Vice President of Chabad on Campus International Foundation was at the conference. “Chabad cares deeply about Israel,” he said, pointing out that Campus representatives encourage their students to visit Israel on Birthright and IsraeLinks, which provide students with “a very powerful Jewish experience and a heightened level of Jewish awareness and pride.”

Jewish pride at the campus level, says Rabbi Yudi Steiner, is “the first line of defense against anti-Israel expression. First Jews must have confidence in their own Judaism.”

Steiner has been working with the student community of George Washington University since 2008. This was his first AIPAC experience.

“Typically,” he says, “the students involved in Israel are our future Jewish leaders. Those engaged in activism are also interested in learning about our heritage.” Steiner hopes that by spending time with these “leaders,” he will be able to “segue into discussions about what Chabad offers on campus in regards to Judaism and study.”