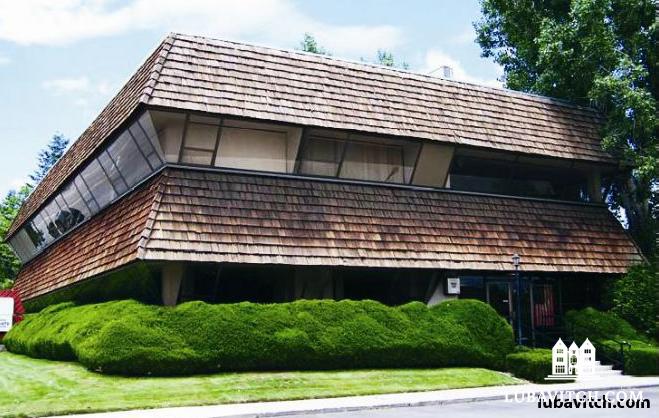 The facade of the new 13,500 sq. foot Chabad of Northern Nevada Center/Preschool in Reno, Nevada.

That will change this September.

Kutler will still make the long trip across state lines each day, but her destination won’t be the same. Come September, the Gan Sierra Preschool will be housed in a new state-of-the-art, eco-friendly building.

Chabad of Northern Nevada will unveil that new building at a ribbon-cutting ceremony on the 26th of May. Community members and elected officials will celebrate the story of the community that grew in Reno.

Known as “the biggest little city in the world,” Reno boasts most of the conveniences expected in a medium-size metropolis, except for a Jewish federation, JCC, or a solid Jewish infrastructure. Rabbi Mendel and Sarah Cunin moved here in 1998, hoping to provide all three. With their new building nearing completion this month, it appears like they have succeeded.

“There are a lot of Jewish people in Reno [the Cunins approximate the total at 4,000], but there was nowhere for Jewish singles to meet other Jews, there was no place for families to hang out with Jewish friends,” explains Sarah Cunin. “There was really nowhere for the community to go. Because there is no community center here, we are trying to provide a little of everything.”

In addition to its preschool, the 13,500 square foot building will house an elementary school, a senior center, internet café, restaurant, and synagogue. A day center for seniors, catered meals for Lake Tahoe vacationers, and internet access for parents who travel up to an hour and a half each way, are all amenities that Cunin is proud of. But what most excites her about the new building is its yard.

Reno’s positioning near a forest and the Truckee River formed the background for this creative play haven. “We created a mini forest and beach to replicate our environment,” Cunin explains. “There were six mature cottonwoods on the property that were dead. We recycled them into various play structures, including an elevated stage made out of a large trunk. There is an outdoor classroom for experiments and a child-size garden where children can plant and eat their own vegetables. Usually children get hurt or bored on a playground,” she believes. “But nature can interest kids forever.”

From her mountain home in California, Kutler admits that, “it was not in our plans to send Griffin to a Jewish school. At the age of four he told us that he would wait in his room until we found him a Jewish school. He went upstairs and closed the door, and I started looking into options. The minute we walked into the preschool for the first time, he told me, ‘you can leave now, I’m home.’”

The new center will clearly serve as a home for all branches of Northern Nevada’s Jewish community. Recognizing that is Nevada governor, Jim Gibbins, who will attend the inaugural event. In a statement to Lubavitch.com, the governor said, “I am pleased to attend Chabad of Northern Nevada's upcoming ribbon-cutting ceremony for their new building. Jewish life, culture, and tradition have always been an important part of Nevada's history, and I am pleased to welcome Chabad's new building as a center for Jewish education and outreach in Northern Nevada.”

Now that Griffin will be attending school five days a week this September, his mom is trying to find someone to carpool with. Despite the long commute, though, she is thrilled with his education.

“He didn’t give us a lot of options, but I really wanted him to be happy. And it is a very unique, wonderful school. It helps foster in the kids a love for Judaism that they can express in their own way. He comes home from school every day excited about something new he has learned. Griffin says, ‘school is my favorite subject.’”