A decrepit squatter’s space is restored to its original intent 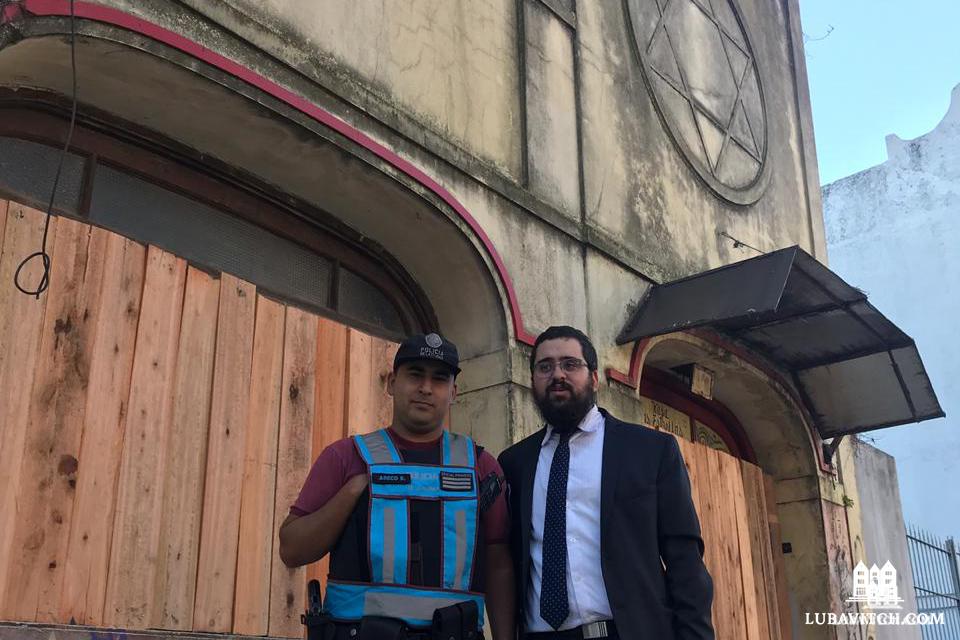 Rabbi Shneor Mizrahi in front of the synagogue

Knesset Israel Boca Barracas is a synagogue once more.

Occupied by a squatter for the better part of two decades, the synagogue built in 1907 was desecrated when Rabbi Shneor Mizrahi discovered it six years ago. The Chabad representative to Barracas, a neighboring Buenos Aires district, determined to return the tarnished sanctuary to its former glory.

After five years of friendly requests and then legal action, Knesset Israel hosted its first service on a hot August morning. Several days later, fifty supporters gathered on Tisha B’av, the Jewish calendar’s most solemn fast day. Sitting on the decrepit floor amidst antisemtic graphics was especially apropos on a day that commemorates the devastation of Jerusalem’s Temple. “We really felt the destruction,” shares Mizrahi. “It is completely surrounding us. And now, we rebuild.”

Rebuilding is Leandro Olsztajn’s passion. His father, Majsze Icchok, was born in Bergen-Belsen in 1948. Olsztajn’s grandparents survived the Warsaw Ghetto and several camps before immigrating to Argentina. When Mizrahi reached out for his assistance, Olsztajn didn’t hesitate. “When I got there, there were two swastikas at the entrance, antisemitic drawings on the wall,” he recalls of his visit in early July. “I told the squatter, ‘you’re not just living in a place of another person. You are profaning it, turning it into a cemetery.’”

The man wasn’t moved. According to a technicality in Argentinian law his residence in Knesset Israel was legally protected. The synagogue’s deed had been turned over to AMIA (Asociación Mutual Israelita Argentina), the country’s Jewish community center, mere months before it was bombed in 1994. With its deed missing and membership dissipating, a lone surviving rabbi held on dearly. When he passed away, the synagogue was left vacant and vulnerable to interlopers such as the man who moved in and renamed it a derisive “House of Stars.”

In desperation, Mizrahi turned to Olsztajn, an engineer, for assistance.

The synagogue was in a decrepit state and replete with anti-semitic art (Photos: Lubavitch.com)

“When he asked me, I said of course. It was not only helping him, not only helping me, but this was an effort for all the Jewish people.” Olsztajn reached out to government officials who promised to help him. A judge declared that the squatter could not be evicted until he heard that dangerous raves and unhealthy conditions proliferated inside. The authorities told the men to inform them of upcoming parties. Mizrahi, who follows the wild group’s antics on Facebook knew when the next rave was being hosted and called the police. They came, the squatters were evicted, and now the synagogue begins its slow journey back to its essence.

Knesset Israel sits on a side street in this brightly colored neighborhood called La Boca, today a hot tourist destination. In 1907 La Boca was the port barrio that welcomed immigrants to Argentina. The Russian newcomers who built the structure were part of a mass migration which saw the country’s Jewish population explode to 128,000 in only a decade. Its heyday came and went: the last bar mitzvah at Knesset Israel was in the 1970s.

“Wow, wow, was it terrible,” recalls Olsztajn of his visit after the synagogue was returned. “It was dark and humid and horrible. I just cried. It is especially difficult for me–these Nazis killed my family. Helping here was not just saving the synagogue, for me, it was about justice.”

Now that the 200-meter building is back in Jewish hands, Mizrahi has big dreams. “We are working 18 hours a day to clean and repair,” says the rabbi. “It is cheaper to tear it down and rebuild, but we want to fix what we have.”  Mizrahi envisions regular services and a hostel for Israeli tourists. He also plans to create a museum on the site celebrating the Jewish community’s local history and synagogues.

To finance the initial repairs and remodel, Mizrahi is hosting a Charidy campaign aiming to raise $300,000. The fundraising effort opens on September 23.

“It was a revealed miracle that we got this place back,” states the young and motivated rabbi. “Now we have to get to work.”

In 1994, Knesset Israel in Boca Barraccas was bombed. Its deed, held by AMIA (Asociación Mutual Israelita Argentina), the country’s Jewish community center, went missing. Its membership dwindled. A lone surviving rabbi held on dearly. When he passed away, the synagogue was left vacant and vulnerable.

The once beautiful Knesset Israel, built in 1907, is soon desecrated with swastikas and hateful graffiti. It is a shambles when Rabbi Shneor Mizrahi came upon it six years ago.

Removing the squatter after 20 years proved quite the legal challenge, but now the 200-meter building is back in Jewish hands, and Mizrahi and local engineer Leandro Olsztajn— grandson of Holocaust survivors–have big dreams.

Though it would be cheaper to tear it down, they’ve launched a fundraising campaign and are working 18 hour days to clean and repair it. Mizrahi envisions regular services and a hostel for Israeli tourists with plans for a museum on the site celebrating the Jewish community’s local history and synagogues.

Knesset Israel Boca Barracas is a synagogue once more.