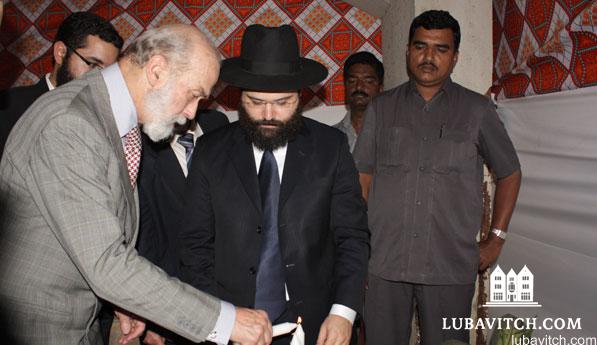 (lubavitch.com) Prince Michael of Kent visited the Chabad Nariman house in Mumbai, India on Wednesday, January 20. A first cousin of Queen Elizabeth II and the grandson of King George V, the Prince was accompanied on the tour by Israeli Consul General Orna Sagiv and Rabbi Avraham Berkowitz, director of the Chabad Mumbai Relief Fund.

Walking through the five-story ravaged center, the Prince took time to learn in greater detail about the attack, and about the history and outreach work of Chabad-Lubavitch.

He paused on the roof of the Nariman House where a permanent menorah has recently been erected. The menorah stands on the same spot where Indian commandos landed their helicopter in an attempt to end the siege.

“It is a beautiful symbol of light, like the menorah in the Temple,” reflected the Prince. Despite terror and darkness in the world, he observed, the menorah lights up the Colaba neighborhood.

As his tour came to an end, the Prince presented Rabbi Berkowitz with a gift of $100,000 for the rebuilding efforts of Chabad of India. He made the donation on behalf of the DVK Foundation, a charity committed to victims of terror. Prince Michael is a Patron and Donor of DVK.

Prince Michael noted Chabad’s continuing activity in Mumbai and beyond. “I am well aware of the spiritual and humanitarian work of Chabad in England, as well as around the globe,” he said.

A great-grandson of Tsar Alexander II of Russia, the Prince is involved in many charitable and business ventures in his ancestor’s homeland. He displayed familiarity with Chabad’s extensive work in Russia dating back to his great-grandfather’s reign, and offered to inform President Vladimir Putin of his visit to Chabad of Mumbai.

Following his tour, Prince Michael presented the keynote address at the Global Economic Summit of India. Addressing a large audience of businessmen, he recounted his tour of the Nariman Chabad House, and indicated that the DVK donation would go to fund the rebuilding of its kitchen, where meals to feed thousands were prepared before it was destroyed in the 26/11 terror attack.

Related Articles
View All
News Briefs
Remembering The Struggle for Russian Jewry
Ninety-three years ago today, Rabbi Joseph I. Schneersohn, sixth Lubavitcher Rebbe, was freed from Soviet-imposed exile.
News Briefs
STATEMENT BY CHABAD-LUBAVITCH WORLD HEADQUARTERS
Every day that Jews are barred from entering the synagogue by armed guards is an unforgivable violation of the Jewish people!
News Briefs
IL Governor Rauner Joins Chabad Emissaries in Prayer at Western Wall
Illinois Governor Bruce Rauner was joined by Rabbi Avraham Kagan of Lubavitch Chabad of Illinois on a visit to the Western Wall in Jerusalem Tuesday…
News Briefs
Kathmandu Emissary Organizes Rescue on Yom Kippur
It was the night of Yom Kippur, and Rabbi Chezky Lifshitz was not in shul.
Get Inspiration to your inbox!
Newsletter
Join our weekly newsletter for inspiration and updates
Donate
Find Your Local Chabad Center
Chabad
About Chabad-Lubavitch
About Chabad Lubavitch
The Rebbe
Headquarters
Magazine
Magazine
News
News & Updates
In The Media
Impact
Social and Humanitarian
Social and Humanitarian
Education
Education
Community
Community