Bringing the Spirit of Freedom to Israel’s Neediest 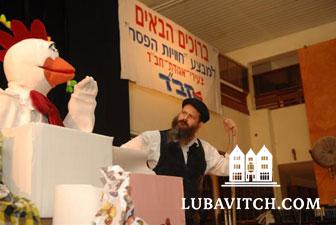 During the weeklong holiday of Passover, when crisp flatbread represents freedom and horseradish roots the bitterness of slavery, Chabad’s activities can be viewed as so many bridges across Israel’s many divides: secular and religious, terror victim and bystander, immigrant and sabra native, rich and poor.

For 50 years, Tel Adashim, southwest of the Kineret, has cultivated its stance as a thoroughly secular town. That did not deter Rabbi Shlomo Schwartz of Chabad of Hadera and four Chabad yeshiva students from packing mixing bowls, flour and a portable oven into their mobile matzah bakery. For the first time ever, Tel Adashim elementary school children participated in the full Passover experience – avidly donning slave uniforms made from sackcloth, dragging bricks to build pyramids, and rolling flour-water dough into matzah. I

n Nahariya and Be’er Sheva and innumerable points in between Chabad ventured where few religious organizations are found. A unit of young soldiers stopped in to visit Kfar Chabad, Chabad’s headquarters in Israel, for a Passover 101 session. With machine guns resting on their laps, the soldiers received information about the holiday, toured one of the world’s largest handmade matzah bakeries, and brought home three matzahs for the own Seders.

After their military service, the soldiers typically backpack to distant points on the globe; a wandering that has become a rite of passage for young Israelis. And in what has become an expected component of Israeli parenting, their mothers will worry about them. So many fretting Jewish mothers, eager for their peripatetic children to connect with traditional Seders, phoned Lubavitch Youth Organization in Israel, for advice that the organization set up a special worldwide Passover hotline – 960-7588-03.

Thousands of calls poured in.

One mother who knew her child was somewhere in Colombia was relieved to discover Chabad of Bogota had a special Seder just for Israelis. Though the family does not observe many Jewish practices,“she wanted her child, who was now on her own, to be in a family-oriented, traditional setting for the Seder,” said LYO’s Rabbi Dov Levitin.

Another one of Chabad’s Passover innovations takes a page from Martha Stewart. Tables set for the holiday are placed on display in bus stations and malls around the country. As passersby come to investigate the matzahs, Seder plates and haggadahs booklets, Chabad representatives are on hand to answer questions and present invitations to community Seders.

One mark of the popularity of Chabad’s Passover edu-tainment activities is the number of politicos who show up for photo ops when a matzah bakery is in town. Mayor Ron Nachman of Ariel and Mayor Motti Malacha of Kiryat Malachi stopped by to receive matzah. Mayor of Kiryat Motzkin Haim Tzuri beamed and posed for a shot with a box of handmade matzah.

Chabad Terror Victim Project’s tireless Passover outreach work reaches out is a more sobering activity. In three weeks, the Project distributed $60,000 worth of aid. Cash and food packages went to some 150 families. Passover is a time when the entire family sits down together. When you have to set a table with one less chair because you lost a mother, father, sister or brother to terror it is very, very hard,” said program director of activities Rabbi Menachem Kutner.

An in-person visit to tell the families they have not been forgotten is integral to CTVP’s work. It’s why Rabbi Kutner drove up to Netanya to bring matzah and wine to a man whose right hand was gravely injured by a katushya rocket fired on his car. A special fund for Passover needs set up by CTVP (donation inquires can go to kutner@chabad.org.il) provided clothing for the man’s five children. Without our help, they did not have the means to make Passover,” Rabbi Kutner said.

The next day, Rabbi Kutner headed back to the car to drive to Maaleh Adumim. There he visited a mother of four who became a widow when a sniper’s bullet killed her husband four years ago. In December the woman suffered the loss of her youngest, a profoundly autistic boy. CTVP paid the severely depressed woman’s cleaning and Seder expenses.The money was needed so the daughters and grandchildren could join the Seder and bring the woman some joy,” Rabbi Kutner said.

As varied as the needs of those helped by the CTVP are the Jews from around the world who now call Israel home. Chabad responds by hosting communal Seders especially for the newcomers in Russian, French, Spanish and English. Publications for the holiday printed by Lubavitch Youth Organization are available in several languages. Content in the magazines is aimed at helping readers understand and observe the holiday. In the Russian edition, the entire text of the Yizkor – remembrance service – is transliterated into Cyrillic characters. Even those with very little knowledge of Passover rituals are familiar with the importance of food for the holiday.

That puts the 1.5 million Israelis living below the poverty line in a bind. In Kiryat Shemona, Chabad distributed 2,000 food packages, double last year’s number. Recipients run the gamut: “immigrants, native born Israelis, the old and the young. We are working around the clock,” said Rabbi Yigal Tsippori.

Back at Kfar Chabad, onionskin fragments gather in drifts on the floor of Chabad’s food distribution center. Cases of onions, potatoes, carrots, meat, fish, chicken, wine and matzah were parceled out into packages by the thousands and distributed by Chabad representatives across the country.

In all, hundreds of thousands in Israel will have been reached by Chabad this Passover. But 10,000 plus food parcels for the needy, 230 Chabad branches with public Seder dinners, 20,000 school kids visiting Kfar Chabad’s bakery in one week is much more than the sum of its numbers. It is about uncovering the meaning in the symbolism represented by this Festival's rituals: realizing individual freedom through spiritual growth, and helping others do the same.