Book Review: For the Love of Truth 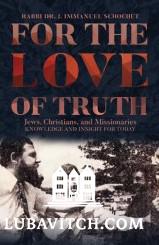 For The Love of Truth: Jews, Christians, and Missionaries

I am reminded of a family story of the time the author of For the Love of Truth entered a room of missionaries and said, “I am the messiah that you have been waiting for, for my name is Immanuel—and the first 12 of you who sign up at the end of the evening can be my apostles.” He then proceeded to show how all the quotes traditionally cited by missionaries applied to him. By his account, his opponents were screaming ‘Blasphemy, blasphemy”—but Rabbi Dr. Schochet merely smiled.

Peace and Truth. The two qualities are often at odds. It is easy to maintain the peace if we are willing to bend the truth, and easy to tell the truth if we don’t need to worry about who will be hurt by it. In an imperfect world, truth must often be compromised. But if we sacrifice truth too freely and too often, then our world becomes unstable because it is founded on lies. Perhaps this is the price of our current politically correct society, in which peace often trumps truth. Indeed, we have come to speak not so much about Truth but truths, implying that truth is personal, subjective, and relative.

Rabbi Immanuel Schochet would have been unimpressed by the modern trends. Surely there are still some things that are not just matters of opinion but of conviction. Bold, purposeful living cannot be inspired by “multiple points of view.” It requires the rock-solid foundation of truth.

Rabbi Schochet, who passed away three years ago, was a rabbi, an academic, an author, and a renowned authority on Jewish philosophy and mysticism. In the interests of full disclosure, he was my uncle and in many ways, my intellectual mentor.

His pioneering anti-missionary campaigns laid the foundation for many who continued this line of work, and this book, which has been brought to print posthumously by his family, is meant to arm the victim of proselytizing efforts with a clear, rational way for warding off those attacks.

What is the goal of debating missionaries? What does one hope to achieve?

As Rabbi Schochet notes early in the book, one man’s religion is another man’s cult (p. 31). Indeed, most religions, in their early stage could be defined in this way as they broke away from the accepted thinking of their time under the guidance of a charismatic leader. Over time, as they gained followers, they came to enter the mainstream of society. Yet the size of a following is a crude criterion for whether a faith can be considered legitimate or not. Rabbi Schochet suggests that the distinction must be in whether one’s belief is defensible or verifiable from an objective, rational point of view using a form of thinking that would be acceptable even from the opposition. Belief founded purely on emotion is the ultimate marker of cult-like behavior.

All religions, he points out, share the premise that “where reason ends, revealed truth or belief begins” or “where philosophy ends, religion begins.” This means that while the personal beliefs of one religion are very different than the beliefs of another, if one party takes its beliefs for granted, the other party must be granted the same privilege (p. 57-58). For this reason, debates regarding belief are quite meaningless.

But things become somewhat more complicated because the Torah is accepted as true by both Jews and Christians. This provides an opening for Christian missionaries to attempt to prove to Jews that the biblical texts themselves support Christianity. Unfortunately, the typical Jewish target for missionaries is not well-versed in the biblical text and therefore may find it difficult to ward off these arguments. In non-technical language, Rabbi Schochet explains why these standard arguments used by missionaries to prove to Jews why they must embrace Christianity have no validity. For example, missionaries often cite Isaiah 53, the “suffering servant” passage, as a Messianic prophecy which allegedly reflects the life and death of their savior (p. 116-117). Yet there is nothing within the text to suggest this; indeed the context implies that this phrase refers to the people of Israel as a whole.

A hallmark of the book is that it accords to others the respect that it demands for Jews. Unlike Christianity, Judaism is not meant to be a universal religion for all mankind (p. 52). So long as they follow the universal Noahide code, non-Jews can find salvation in their own faith. Thus, Judaism is opposed to proselytizing. Converts are welcome to join so long as they come out of a sincere and voluntary conviction that they have found absolute truth in Torah. But Judaism believes that members of other faiths should not be called upon to abandon their own beliefs.

Those who persevere will be rewarded in Appendix II with a series of letters in which Rabbi Schochet challenges missionaries in Toronto (his hometown) preying on Jewish students to debate. Biting and brilliant in tone—and dare I say fun to read?—Rabbi Schochet ultimately succeeds in getting the missionaries to retreat from their proselytizing efforts.

Unlike Rabbi Schochet’s other books, For the Love of Truth has a somewhat raw and unfinished feel to it. As noted in the foreword, the book was published posthumously by his family, based on his lectures and notes. Still, the book manages to convey the gist of Rabbi Schochet’s hallmark style, the impeccable logic leavened by sparkling wit.

Reading For The Love of Truth, I was reminded of the many ways in which Rabbi Schochet shaped my own thinking and intellectual development. As a young Chabad representative at Cornell University, I called my uncle for advice when preparing talks on sensitive topics. He taught me never to be impressed by the emotional outrage of an opponent; he taught me to be compassionate but honest, because ultimately, only truth could stand. His blistering attacks made it impossible for listeners to fall back on easy clichés, but when he sensed an honest question, no one could be more patient and understanding. For he was convinced that without the love of truth, there can be no true love.