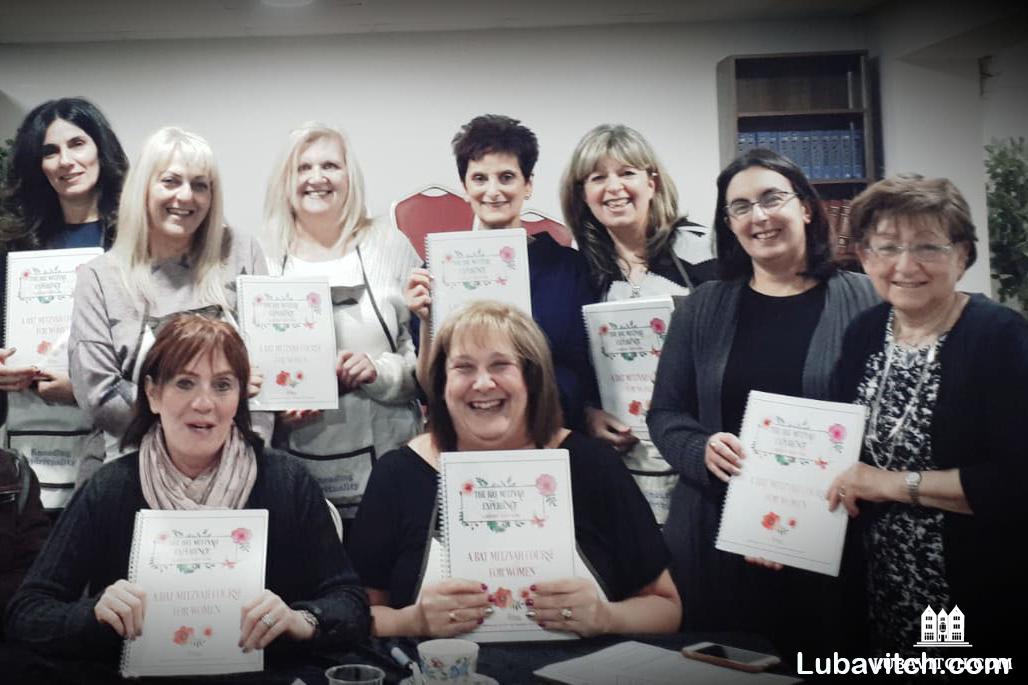 Twelve young women and their families gathered around the Shabbat dinner table last month at Chabad of Whitefield in Manchester, England, to celebrate the completion of their bat mitzvah experience.

Mrs. Sara Jaffe has held these ceremonies every year for the last decade as a new group of almost-twelve-year-olds graduate from a course that prepares them for Jewish adulthood. This group is different, however. Ranging in age from forty-five to eighty-two, these “bat mitzvah girls” are joined by their husbands, children, and grandchildren. Only one of them celebrated her bat mitzvah at twelve, and none of the ladies attended the bat mitzvah classes currently required of anyone wishing to celebrate their bat mitzvah at a synagogue in the UK.

Sara created the “Bat Mitzvah Experience: Ladies’ Edition” to invite the women of her community to explore their Judaism as adults, in a way they may have missed out on as children. She built the course around a curriculum designed by her cousin Chani Katzenelenbogen, who directs Chabad in Owing Mills, Maryland, but it was her idea to model it on the successful Bat Mitzvah and Beyond Bat Mitzvah clubs for which she is renowned in the Whitefield community. The course spanned six weeks and included a trip to a local mikva. The women gathered each Tuesday for discussions about topics such as “G-d and Me” and “Who Am I as a Jewish Woman?”

This was her first experience teaching adults in a group, so Sara wasn’t sure how it would be received. Once they got started, she realised how powerful it could be. “For twelve-year-olds, it is more about the party and the gifts, although the experience does give them a positive feeling about Judaism.” Sara finds that the foundation established by the course often leads to the young women getting involved with Chabad on Campus, but the “immediate impact seems subtle.” “With the ladies’ edition, there’s less peer pressure. They’re past the ultra-materialist stage, and they are happy to learn and implement actual changes in their lives,” she said.

When Sara invited Francine Goldman, who grew up in nearby Prestwich, to the BMC:Ladies’ Edition, she thought, “We’re never too old.” Though Francine’s family were synagogue members when she was growing up, she did not join the few girls taking the bat mitzvah lessons offered at the synagogue. She had recently lost her best friend in a fire and didn’t want anything to do with G-d. Though she’s not sure that was the reason she didn’t celebrate her bat mitzvah she noted that it wasn’t common for Orthodox girls to have a big bat mitzvah celebration at the time. 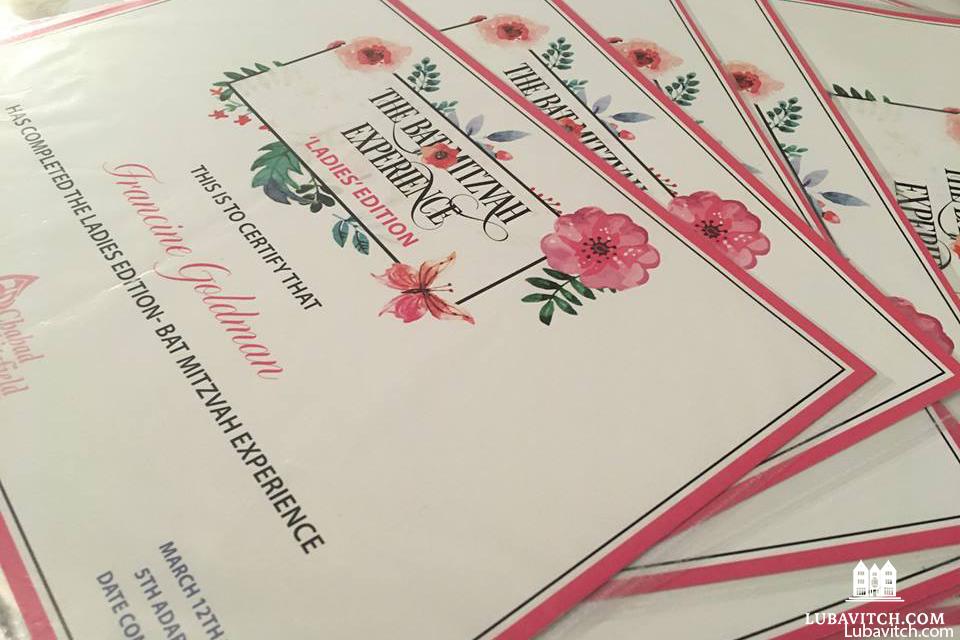 Francine attended the course hoping to not only expand her Jewish knowledge, but also tackle the G-d question she’d been grappling with since her preteen years. “The way Sara taught the classes and the discussions we had made me want to go each week, and now I’m hoping to build a better connection with G-d through prayer and mitzvot,” she said.

At the Shabbat dinner and graduation ceremony, Sara presented each participant with a certificate of completion. Each graduate had a family member stand up and bless her, and some even received gifts and cards celebrating them on their special occasion. “It was nice to hear feedback from our families because in our daily routines we don’t usually take time to call out the good in the people we love,” Francine said.

As the evening concluded, many of the women asked Sara to continue their meetings. “My only criticism is that it has been too short. It’s given me a curiosity to learn more and I look forward to carrying on the friendships we have started,” she was told by one participant.

Sara has committed to hosting a monthly meeting for the Ladies’ Edition’s first graduating class and plans for the course to be an annual event.