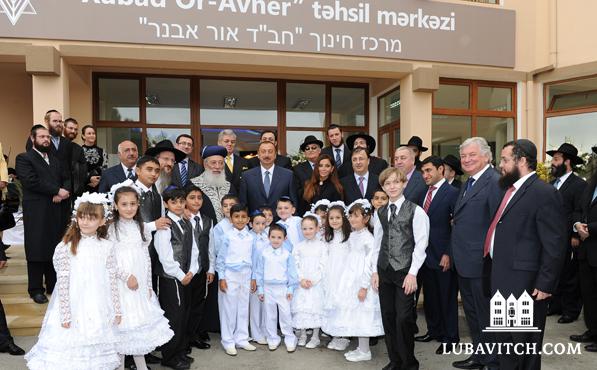 (lubavitch.com) A moderate Muslim country and neighbor to Iran, Baku, Azerbaijan will now be home to a new campus in the Ohr Avner school system in the Former Soviet Union.

Some 200 people, including Azerbaijani President Ilhem Aliyev, Israel’s Chief Rabbi Shlomo Amar, Russia’s Chief Rabbi Berel Lazar, Chairman of the American Council for World Jewry Jack Rosen and President of the CIS Federation of Jewish Communities Lev Leviev participated Monday in the inauguration of the $10 million campus. The new facility will serve 450 students currently enrolled at the school, and will also include a Jewish community center and a sports facility for the country’s 12,000 Jews.

President Aliyev, who donated the 15 acres of land where the school stands, said that this occasion marks the completion of an epic project begun by his father. Heydar Aliyev, former President of Azerbaijan had promised Leviev the permits to build the center in 2005.

“Jews have lived in Azerbaijan for a long time, and for generations they have shown how well they get along with other people,” Aliyev said, addressing the crowd at the ceremony. “We call on all other nations to treat minorities with respect, like we do.”

Chabad representative to Baku, Rabbi Shneor Segal met with the President prior to Monday’s ceremony.

“The President has been extremely warm and helpful in the success of this project. Although many such ventures often run into various bureaucratic issues, he gave us the green light and helped us navigate the bureaucratic channels throughout the building process,” he told lubavitch.com.

One of the first countries to recognize Azerbaijan when it declared independence in 1991, Israel has maintained diplomatic ties ever since.

Israeli President Shimon Peres recorded a personal message prior to the event.

“I want to salute you, your courage and your wisdom in upholding the value of building schools and centers for all religions so that no book is lost and no prayer goes unheard,” he wrote. “I want to thank you, from the bottom of my heart, from the Jewish people and Israel.”