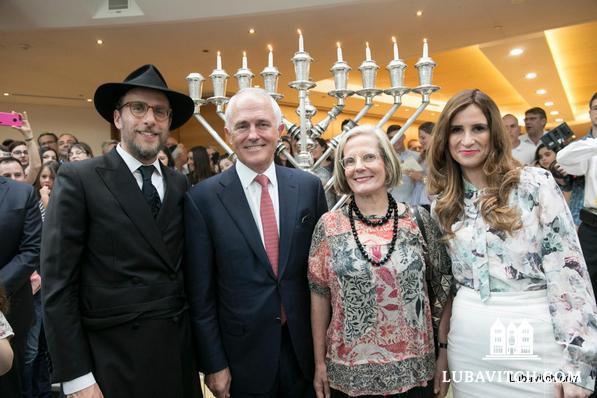 Australian Prime Minister Malcolm Turnbull and his wife Lucy joined the pre-Shabbat menorah lighting ceremony at the Central Synagogue of Sydney this past Friday.

The Prime Minister criticized the U.N. Resolution 2334, which was passed on December 23rd.

“Australia stands shoulder to shoulder with Israel in the fight against terrorism. We support Israel, the only democracy in the Middle East,” Turnbull said. “We support the peaceful resolution of the disputes between Israel and the Palestinians, and a two-state solution.”

“We could not possibly imagine our country Australia, the most successful multicultural society in the world, without the indelible contribution of the Jewish people,” the Prime Minister concluded.

Central Synagogue’s Rabbi Levi Wolff thanked the prime minister for his unfailing support of Israel. “This past week Israel found itself isolated from foes and allies alike, and yet there was one voice of morality, a voice of justice that refused to be silenced; the voice of our country Australia under the stellar leadership of our Prime Minister Malcolm Turnbull and his Foreign Minister Julia Bishop.”

“Israel and the Jewish community have a true friend in you . . . a true leader who stands up for justice and truth.”