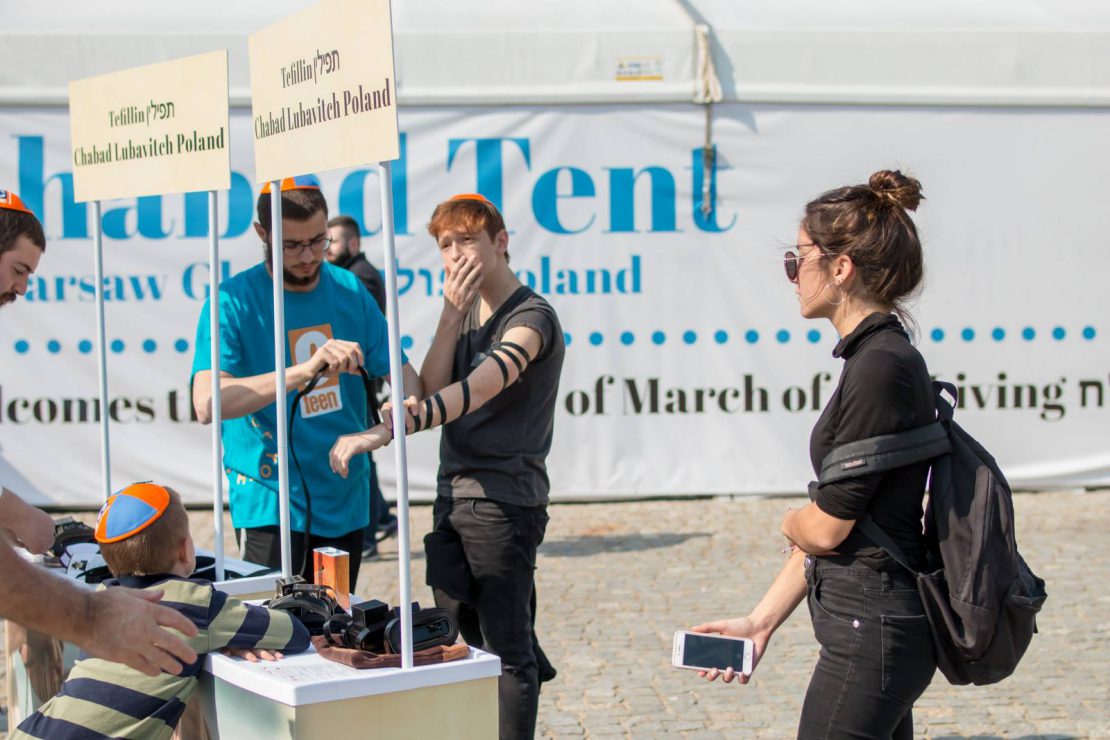 Monday morning, April 9, the Warsaw-Chopin Airport is teeming with Jewish travelers who’ve come to participate in The International March of the Living (MOTL) Program. I meet Marc Zell, Co-Chairman of Republicans Abroad Israel. Like me, he’s come at the invitation of Chabad of Warsaw.

Our first stop is at the Chabad Center where the shacharit morning services have just ended and Rabbi Sholom Ber Stambler is leading a Talmud class.

When was the last time Jews sparred over Talmudic arguments in Polish?

“This didn’t even exist before the Holocaust!” Marc says, incredulously.

After breakfast at Chabad, we walk through the Ghetto. The Umschlagplatz is all that remains in what is now a city like any other. An elderly Polish gentile on his morning walk approaches us. He wants to talk. A ten-year old when the Nazis rounded up local Jews for deportation to the death camps, he remembers.

“I saw everything from here.” He points to the other side of what was once the Ghetto wall.

He describes the frantic desperation of the Jews when they realized they’d been trapped. “They came, mothers, children, starved for the extra food rations that the Nazis promised anyone who agreed to show up voluntarily.” Those who tried to escape were shot. “Like this,” he says, gesturing with his hands as if pulling the trigger of a rifle. He cries

We reach The POLIN Museum, a vast and beautiful monument to a thousand years of Polish-Jewish history. The exhibits— of communities, yeshivas, intellectual activity and extraordinary scholarly output— give evidence of generations of an exquisitely vibrant Jewish life. They throw the magnitude of Nazi destruction into sharp relief.

Museum Director Dariusz Stola is on hand greeting visitors. The Museum is a critical educational medium for Polish people, especially students who rarely get to meet Jews. Here they can learn about the religious Jewish life that once existed in Poland. Were it not for Chabad of Poland, he offers, they would think it’s long gone. “Poles are confused when they meet Jews who don’t look Jewish,” Stola tells me.

Later in the week I will join the MOTL and make the two-mile trek from Auschwitz to Birkenau. Rabbi Mayer Stambler, also a Chabad representative in Warsaw with his brother, is prepared for the emotional and philosophical disruption of the experience. “They come back from the camps deeply moved.” But to be moved is not enough for them. “They want to translate their emotions into something meaningful. They want to do something Jewish.”

The rabbis greet visitors in The Chabad Tent. Situated on the plaza outside of the POLIN Museum, it offers a pleasant space to process, to talk, to learn. Survivors, leaders, Jews and Poles meet up here. Visitors participate in dialogues with rabbis about Judaism and faith; they speak to Polish business people about the government’s controversial statements, and to Polish high school students about local anti-Semitism. They watch films on related themes.

Faith, they learn, didn’t die in Auschwitz. Holocaust survivor Rabbi Nissen Mangel came from New York to share his story. He slipped through the clutches of Dr. Mengele. He saw miracles. Even in that dark hell, he felt G-d’s presence. Rabbi Stambler offers Chasidic insight to the meaning of Divine omnipresence. “The world is constantly being created.”

On their return from Auschwitz-Birkenau, MOTL visitors are looking to connect. To the past. To other Jews. To their faith. They want to honor the souls of the victims with a prayer. Chabad rabbinical students help them bind tefillin. The tefillin boxes are just like the ones that lay in a heap, in Auschwitz.

I catch up with Marc Zell. “I met a communications expert today,” he tells me. “He was taken aback by Chabad’s worldview.”

“Yes. The rabbi said that the world is constantly being created anew by G-d. That was a fundamental insight that he had never encountered.” Here in the Chabad Tent, in Warsaw, he discovered a perspective on faith in Divine Providence.

On Friday afternoon, one thousand March of the Living participants come to the Tent. Like Jewish women throughout the ages, they light shabbat candles. The men make kiddush over wine. A spirited, joyful Shabbat dinner unfolds. Chabad rabbis, Rabbi Yossy Lew and Rabbi Pinny Andrusier, respectively, from Georgia and Florida, share Chasidic stories.

And as Jews did in the Warsaw Ghetto and back through the generations, before their voices were silenced, they now sing Me’ain olam haba (This is the Shabbos).

The hours pass. Nobody notices.

“This is the Shabbos . . .” they sing, “a glimpse of the World to Come, where perennial peace will be a reality.”