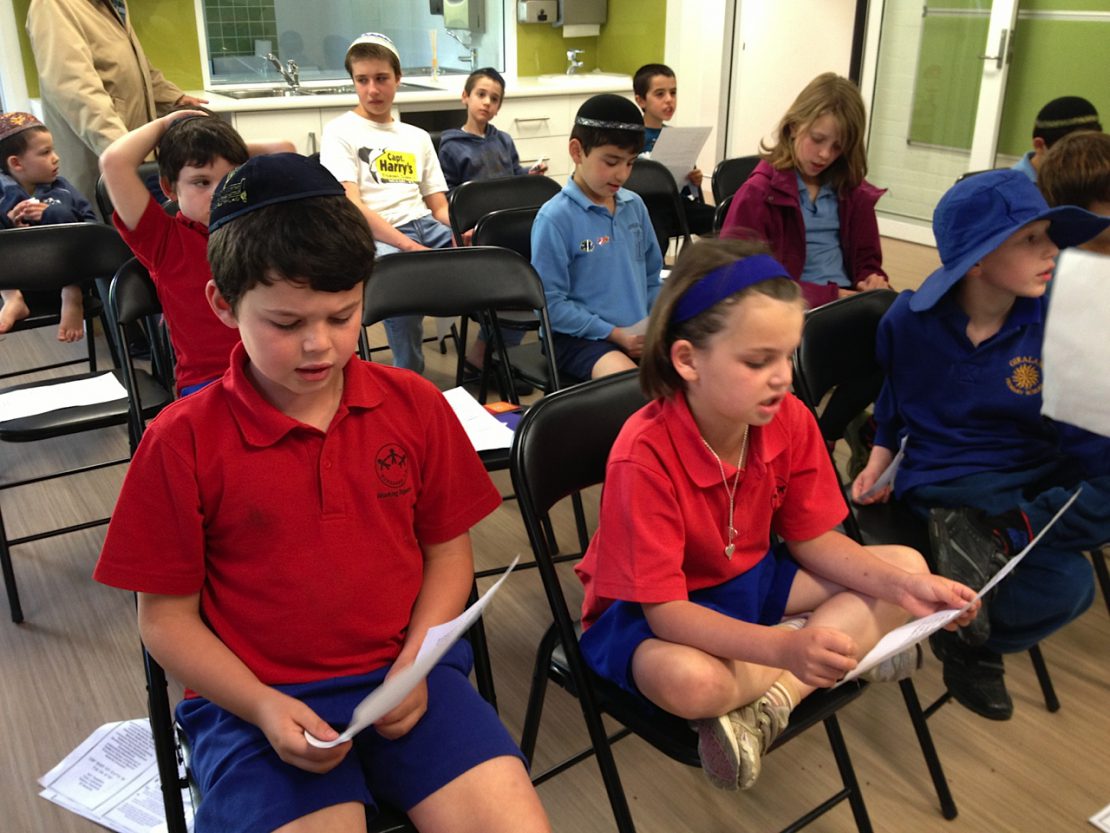 Before Chabad came to Australia’s capital city, Jewish children in Canberra’s private and public schools routinely participated in mandatory chapel time where they were following a Christian curriculum.

But with the support of several local parents, Chabad’s former emissary to Canberra, Rabbi Dan Avital met with the area’s school principals and pastors and arranged for Jewish children to have Jewish study time instead of chapel time.

That was one of the first building blocks that Rabbi Shmueli and Rebbetzin Chasia Feldman—relatively new emissaries to Canberra—built upon since coming from Sydney to the Australian Capital Territories (ACT) nearly a year ago.

“We felt that focusing on children’s Jewish education is critical to all of our efforts building a Jewish infrastructure here. Giving the children positive, joyful exposure to Jewish tradition and Jewish values will ensure Jewish continuity,” said Chasia Feldman.

This soon led to Canberra’s first Jewish afterschool program, and this month 25 students successfully completed the school’s first term. Situated in the Chabad ACT Centre in Giralang, the afterschool program and its child-friendly environment was, said Arava Klein, one of the founding parents of the new program, “a great step forward in providing the basic educational requirements for a Jewish community.”

Now the Feldmans—parents of 9-month old triplets and a three year old daughter—are launching Canberra’s first Jewish preschool. Set to open in February with 10 students, the 55-child capacity preschool garnered an Australia-wide award by the Master Builder’s Association for its outstanding facilities.

Jewish philanthropist and Chabad benefactor Mr. Eliezer Kornhauser has contributed significantly towards building Chabad in Canberra under the auspices of Rabbi Arele Serybranski. He spoke with lubavitch.com about the vision for Canberra’s future as a self-sustaining Jewish community. “Canberra’s free-thinking environment needs the counterbalance of an observant community, and a preschool is such an important piece of the infrastructure necessary to complete a nascent Orthodox community.”

By official census numbers there are some 600 Jews in all of Canberra. But Rabbi Feldman believes there are more than 1200, and lots more scattered around the wider region, many of whom have had no Jewish contact in their lives.

“Many of the Jews who came here after the Holocaust were hoping to get away, and often their children grew up barely knowing that they were Jewish.”

Yet Feldman has seen the proverbial Jewish spark light up even among those most removed. When word got out that there was a rabbi in town, he was sought out.

“I received calls from people in isolated Outback areas who were hungry to connect even though they’d never had any Jewish affiliation and had no idea what Jewish life was about.” Hundreds were drawn to Canberra’s public menorah lighting, and encountering the Feldmans has served as a catalyst for some to embark on life-changing journeys.

Michael Alexander Naricic, a high ranking member in the Serbian church in Canberra learned he was Jewish late in life. He began to study and practice with Chabad, embracing his newly uncovered roots. At the time of his sudden death three months ago, Michael, 65, was attending every service and had begun to live a Jewish life.

The son of a Holocaust survivor, Michael’s mom ended up in Serbia after the war, where she married a Gentile and never said much about her Jewish roots to her son.

But sometime after her death, Michael dreamed that his mother appeared to him and told him to remember that he is in fact, a Jew.

Although his wife and children are not Jewish, they began to come to Chabad to study as well, while Michael reached back into his own Jewish heritage with fervor.

“Ultimately, Michael lived and died as a Jew,” said a saddened Rabbi Feldman who gave Michael a Jewish burial as he would have wanted.

As the only rabbi in the entire region, Rabbi Feldman is the go-to chaplain for hospitals, universities, official government events and prisons. Often called upon to assist with dying patients who want a Jewish burial, Feldman made news several months back when he arranged for the first Jewish burial in Goulburn.

When the hospital contacted Rabbi Feldman about giving a dying Jewish patient his last rites, Feldman made his way there. On his deathbed, after praying with the rabbi, Mr. Wayne Robinson told Feldman that he wanted a Jewish cremation in Goulburn.

Rabbi Feldman spoke to Mr. Robinson about the Jewish way in death and burial, patiently explaining that cremation is forbidden, that the body is to be buried. Robinson was receptive to the rabbi’s guidance, said the Shema Yisrael prayer, and asked to be buried according to Jewish tradition with the kaddish said at his burial in Goulburn.

Goulburn had no active Jewish cemetery so Feldman promptly met with council leaders, got their agreement to consecrate part of the local cemetery as a Jewish burial ground, and began to reach out to area Jews hoping to pull together a quorum of 10 Jewish men to participate in the burial and the kaddish.

Feldman got twice as many. “Many of the 20 men who traveled some distance to rural Goulburn were not affiliated in any way and were not practicing Jews, yet they answered my call. On very short notice, they gave up their Sunday to honor the last wish of a dying man they’d never met,” said Feldman, touched by the experience.

Canberra’s Jewish population consists as well of many Israelis and Jews from other foreign countries working in government. As the Feldmans continued to build, introducing kosher, Shabbat services, Jewish educational opportunities for adults as well as for children, their vision has expanded, and they now see Canberra’s Jewish community as an answer to a larger conundrum.

“Young Jewish couples in places like Sydney and Melbourne often cannot afford to buy homes there,” Canberra resident Bryan Katz explained. Indeed, Australians are experiencing a serious housing crisis that is locking many young people out of home ownership. For Jews who tend to have larger families and need to live in Jewish hubs where they can have access to the kinds of amenities that make a Jewish lifestyle possible, this can be especially exacerbating.

The Feldmans are hoping that their hard work may be the answer for some. Although not on their agenda when they set out to establish a viable Jewish community, now, said Rabbi Feldman, “with a dynamic Jewish community in place, with a mikvah, a shul, kosher availability, educational and social programming and a beautiful community center, this can be a very attractive, affordable alternative for young Jewish families.”