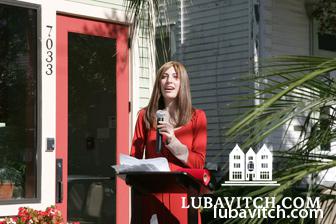 Sarah Rivkin is Chabad representative at Tulane University. Mother of six, Sarah and her husband have created a dynamic experience for the university's Jewish student body.

Tulane itself has done remarkably well since Katrina. Unlike the city itself, which has not rebounded because of poor leadership, Tulane’s president, Scott Cowen, rebranded in the aftermath of the hurricane. He had a real vision, and he used the opportunity to revamp the school, closing down departments that weren’t so successful, and recruiting a more serious element of students.

Today, students gaining admission to Tulane are expected to actively participate in the  work of rebuilding New Orleans.

What does that mean for you, working with Jewish students?

About 30 percent of Tulane’s student body is Jewish. Though Tulane is definitely a party campus, I am seeing incoming students with more thoughtfulness and somewhat more seriousness. That’s good of course, especially because it means they are more inclined to learning about Judaism and Jewish life. So we’ve been lucky.

You’ve also been lucky with the new Chabad Student Center that was completed last year.

Yes, on the day that Katrina hit, we were scheduled to begin demolition on a property that we had bought. Oddly enough, the hurricane did no damage to the building which we were planning to tear down anyhow. After lots of delays and difficulties building post Katrina, we finally completed it last September, right before Rosh Hashana.

You’ve been here nine years—starting out shortly after your wedding. Your family has grown along with the Jewish Student Center.

When we began, we had about five students at a Friday night dinner. Now we have about 100. We also have six children of our own.

I have to say that I’ve only had a positive experience raising my children here. I’ve heard others say that it might be a problem, having your children around college students, having them exposed to their conversations. But I didn’t find that to be true. The students are very respectful and proper, and interact with my children all the time. I’ve only seen good come out of it.

What are some of the real challenges for you as a mother on campus?

Well, I don’t have much of a private life. We live on the first floor, and the student center is upstairs. But students don’t have a family life so they come over at all times. Which is fine, except that not being parents themselves, and typically not being of large families, I worry that suppertime with six robust children at the table might scare them off.

Your mother raised a large family in the Chabad tradition, as you are. And yet I imagine that your life as a mother is very different from hers.

It is. For me,  it’s not just what’s best for me and my family, which in itself is important, but also for whoever walks into the Chabad center, so I’m juggling a lot more and constantly realigning priorities. But I do wish I had more time to do things with them that my mother did with me. Taking them to the park, cooking great meals—the demands on my time mean that I can’t really get to these things.

What’s the most frustrating part of your campus life?

Fundraising. My husband and I would much prefer to spend our time teaching students and working with them.

Also, the pervasiveness of secular culture here. Students come to Chabad on a Friday night, and enjoy a meaningful Shabbat dinner. But then they hit the bars and there’s a real disconnect between the experiences.

What kind of change are you working to achieve at Tulane?

Tulane is 30% Jewish—it’s called Jewlane for that reason—and that makes it an attractive choice for Jewish students. And yet, there’s really no Jewish spirit here. The culture is very New Orleans, and Jewish students are not really comfortable about asserting their Jewish identity on campus.

I hope we’re making some change there.

We’re also working to change an unfortunate assumption among new Jewish students, which is that Chabad is for the orthodox students on campus. We’re here for all Jewish students. We’re not judgmental and our focus is really on our common heritage. It’s a matter of changing misconceptions, one person at a time. Our hope is that they, in turn, will pass word of their own positive experiences on to others.