At the Games: Chanukah in the Public Arena 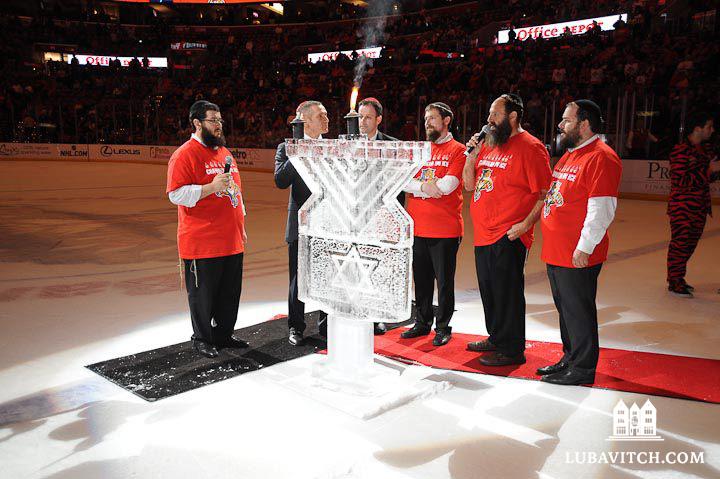 In the late 18th century, a Jewish mystic and scholar living in a backwater of Czarist Russia, took a little known midrash and turned it into an ideology that 200 years later, finds its fulfillment in hot dog stands and sports arenas, in DIY woodworking workshops and the great shopping malls of America.

When Rabbi Schneur Zalman of Liadi, founder of Chabad, put forth the midrash that claims that “G-d desired a dwelling in the lower [i.e. physical] world” (Tanchuma) as the purpose of existence, well, existence (at least for those in search of existential redemption) took on new purpose.

His disciples, their imaginations fired by the possibility of closing the daunting divide between heaven and earth, spirit and matter, began to perceive sparks of light in the dense gloom of those days. They were emboldened to release those sparks and fan them into flames that would transform the darkness . . . to share the light so that others may also see and celebrate opportunities for holiness even in the most irreverent settings.

If you’re a product of Generation Z, or even a millennial, you can’t be blamed for thinking that the Chanukah Menorah lighting in your hometown’s public square or shopping mall was always there. Or that the Menorah on the White House lawn has been there as long as the first Xmas tree was. You probably don’t even know that once upon a time, the idea of lighting the menorah during half time at the games was unthinkable. And if the new kosher concession in the basketball arena at University of Illinois takes off, Jewish hoop fans will soon expect to see these kosher dogs everywhere.

Thanks to Rabbi Schneur Zalman’s metaphysics—(his release from Czarist prison was marked is marked annually on 19 Kislev, for so radical was his thinking that his own contemporaries attempted to suppress him from sharing his ideas) and as further interpreted by his seventh-generation descendant, the Lubavitcher Rebbe, the Chanukah holiday, once not even on the seasonal agenda, is now a popular, widely celebrated event, with major sports teams and home chain retailers getting in on the action.

In 2007, St. Louis Chabad Rabbi Levi Landa, pioneered the first Home Depot Chanukah event in the US, in which visitors to the store had the opportunity to participate in a Do-It-Yourself Menorah making project. Since then, dozens of Home Depots across the US have introduced the idea, bringing colorful, hands-on opportunities for families to explore and prepare for the holiday.

Ditto the Westfield Group, owner of shopping malls in the US, the UK and down under, in Australia and New Zealand who’ve partnered with local Chabad centers, hosting and sponsoring Chanukah family events, with menorah lightings, doughnuts and dreidel games.

The NHL’s Columbus Blue Jackets celebrated Chanukah with Chabad of Columbus. In Nashville, Chabad of Tennessee hosted its fifth Jewish Heritage Night with the Predators.

On Boston’s North Shore, fans looked forward to Chabad’s menorah lighting and Chanukah party before the Boston Celtics game against the Milwaukee Bucks. A glatt kosher concession stand was open all night.

And at the Philips Arena during the Atlanta Hawks vs. the LA Clippers game, where Chabad of Georgia  rranged for a kosher food stand, fans and players joined Chabad of Georgia’s menorah lighting.

All in all, Chabad lit up at some 15,000 public venues worldwide during the eight-day Chanukah festival. And what with 2.5 million holiday guides in 13 languages reaching Jews in 80 countries, and 5,000 menorahs mounted atop moving vehicles, the guesstimate is that there were upwards of 30,000,000 lights this Chanukah.

It’s a far cry since those days when Jewish kids experienced seasonal envy and most Americans didn’t know what Chanukah was, let alone pronounce it. Today, late night talk show hosts know they’re out of the loop if they can’t get the fricative back-of-the-throat pronunciation of the Chet sound in “Chanukah” or in “Chabad” right.

Most important, it was the Chanukah message confirming Judaism’s values of goodness, justice and holiness that gained notice during this holiday. Given enough exposure, intensified exponentially, the light of these values had the power to bring G-d Himself right into the ballpark.