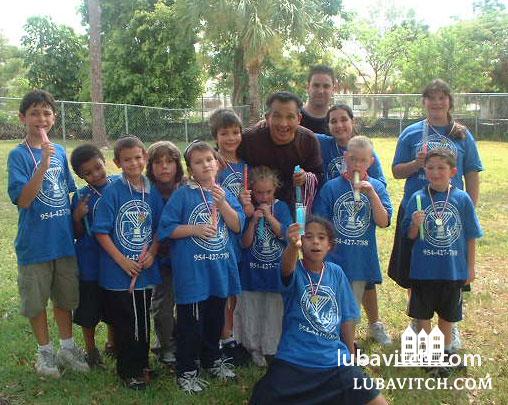 (lubavitch.com) Eight year-old Jason Popick is not like most kids. The back-to-school banners that garnered groans from many, elicited this second grader's enthusiasm.
Jason has an auditory processing disorder, yet he couldn’t wait to get back to school. A student at the South Florida Jewish Day School, Jason’s bright, outgoing, with a knack for playing intricate games.
And he feels right at home at his school, where both faculty and curriculum are committed to his all-around success.
Wasn’t always this way, his mother, Nancy admits.
In the past, Jason, a sociable child, would become despondent over his disability, hurting his focus on those areas that he had potential to succeed.
At South Florida JDS, an accredited school for children with autism, aspergers, dyslexia and other learning and cognitive disabilities, Jason is positively thriving. He “loves making friends and is very focused at playing games. The other children see this and have grown to emulate him,” Nancy says.
South Florida JDS was established in 2007 following the purchase of a 5,000 square foot property by Chabad-Lubavitch of Coconut Creek. Included in the sale was the dismantling South Florida Academy of Learning, a school for children with special needs.
That’s when parents like Nancy Popick and Suzanne (last name withheld on request), who had exhausted the limited options for a suitable school for their children felt desperate, and turned to Baila Gansburg, Chabad representative with her husband Rabbi Yossi Gansburg, and a longtime educator, who agreed to work with them and form a new day school, incorporating Jewish values and ethics into its activities.
The school does not define itself as a special needs school, but rather seeks to identify the individual path to learning unique to each child.
With a small enrollment of 18 students, “South Floriday JDS is a school that works around that, giving each child what they need to grow,” Gansburg said.
Every child, she maintains, has the capacity to learn. It’s the educator's responsibility to recognize a method that will best engage the child's mind.
Suzanne,  whose son has a language deficit, was amazed when she found him playing the role of anchorman during a field trip to Wannado City, an indoor real life role-playing theme park in Ft. Lauderdale. While tackling the cue cards, he was cheered on by his friends who often help him communicate and have come to motivate one another to overcome their personal disabilities.
“There are no labels here, so there is no judgment made,” she said. “These children really take pride in watching each other strive and learn.”
Students feel solidarity and camaraderie, Baila says, and are encouraged to look beyond their various disorders to find a common ground and see one another as equals.
Nancy knew her son was finally in the right environment when Jason experienced a setback due to an adjustment in his medication last year.
Gansburg readily revised his curriculum and worked together with his occupational therapist to institute the "Engine Program" in which he was shown pictures of various activities that aided him in self-regulation and taught him how to best articulate what he was feeling rather than succumb to feelings of frustration.
Occupational Therapist Vicki Seid, who works with the school is impressed by Gansburg's willingness to seek lucrative progressive methods that will enhance each child's educational and developmental skills.
"Baila corroborates with whatever the therapists are working on, she will put into everything the child is doing, so it (the process) is smooth and the child follows through," Seid said.
While many other special needs programs and resource rooms have a more general approach to learning, Nancy says she finds the SFJDS to focus on the individual child's journey emotionally, scholastically, and developmentally.

The school partners with parents to provide a loving, warm environment for the children and their families. A "Sib Workshop" created by Jason’s mom will focus on developing a better understanding of how family dynamics are changes when a child is diagnosed with special needs. The workshop will serve as an outlet for siblings, so that they can discuss their feelings in an open, constructive and positive manner.
"This school is not just about the special needs child," Popick said, "but about the entire family.”
It also builds a strong Jewish identity and Jewish pride in its students.

Rabbi Gansburg serves as the school's Jewish educational director. Last Sukkot, he built a sukkah with the students asking them to contribute to the project based on individual skill and interest. The goal of such activities is to inspire within a child the understanding that ones Jewish heritage is part of their own personal legacy and they can connect to it using methods or means that comes most naturally to them.
"Jason is learning a lot about his Jewish faith and culture. He is getting a sense of Jewish life at school," his mother confirms. He has a natural affinity for the Hebrew language and comes home singing songs and sharing what he has learned earlier that day.
As the school continues to gain recognition and popularity for its independent study tracks and devoted staff, parents have expressed a desire for the school to extend beyond its current grades K-8.
Until then, students have the option to be mainstreamed into conventional high schools, as all of the individualized curriculums are kept on par with area schools.
Tuition for the South Florida Jewish Academy is $18,000.  McKay scholarships are available, but much of the school’s funding comes from the generosity of individuals who recognize the vitality of this schools mission.
Vicki Seid feels the school will serve as a prototype for what a special needs school could and should be, as there is an emphasis on communication and collaboration between Gansburg, the professionals and the parents on how to best develop and educate each child.
Seid says, “She (Baila) literally took a village and turned it into a community with both parents and children benefiting from a staunch support network and a multitude of ‘Bubbes.’”

Related Articles
View All
Education
A Jewish School Beyond Borders
Sixth-grader Hadasa Perez has never met her teacher. Or her classmates.   Yet, while parents, teachers, and children around the world are flailing like fish out…
Education
Camp Gan Israel, Sleepaway Edition
55 Attend CKids’ Inaugural Overnight Camp
Education
Two Universities React as Antisemitism Steps Out of the Shadows
While college administrators debate the limit of free speech, Chabad campus leaders take action.
Education
A Hebrew School Becomes A Community
How has one innovative Hebrew School made the Big Apple the city of choice for Jewish families?
Get Inspiration to your inbox!
Newsletter
Join our weekly newsletter for inspiration and updates
Donate
Find Your Local Chabad Center
Chabad
About Chabad-Lubavitch
About Chabad Lubavitch
The Rebbe
Headquarters
Magazine
Magazine
News
News & Updates
In The Media
Impact
Social and Humanitarian
Social and Humanitarian
Education
Education
Community
Community