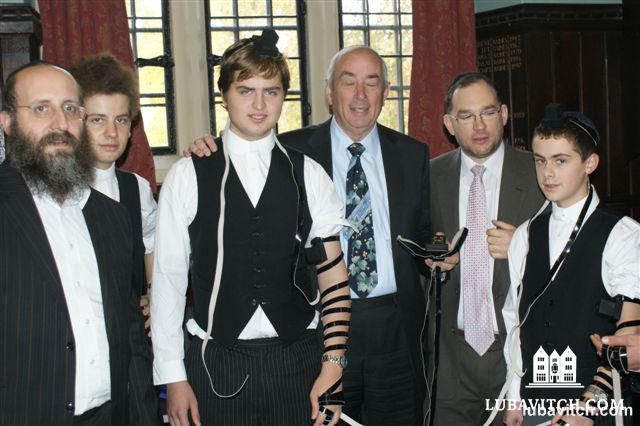 (lubavitch.com) Eton College doesn’t sound like a place where you would expect to find a Chasidic rabbi helping boys wrap tefillin.

In fact, the prestigious boarding school founded in the 15th century by Henry VI as “The King’s College,” counts a small number of Jews among its student body, and that precisely is what they were doing this Sunday morning with Rabbi Yossi Simon of Tzivos Hashem UK.

Messrs Benjamin Pearl and Mendy Taijtelbaum, both well known philanthropists in Anglo-Jewry, facilitated the program at which Rabbi Simon was invited to Eton to meet with the students. Rabbi Simon introduced them to the mitzvah of tefillin and recited the Shema prayer with them. The program included a demonstration in the work of the scribe, giving the boys a chance for a hands-on experience. At the end, Mr. Tajtelbaum presented the students with a gift of siddurim and kippot.

In keeping with the school’s tradition that encourages students to maintain their religious identity, time is regularly dedicated to advance respectively, the religious education of Eton’s diverse student body.  Eton’s Head of divinity, Mr. Michael Wilcokson, encouraged all the Jewish boys to attend the program.

“Most of them had never wrapped tefillin before, nor did they have a bar mitzvah,” says Rabbi Simon of the 14-18 year olds.

“I think it was a meaningful eye-opener for most of the students,” he says.

Mr. Jonathan Paull, Head of Jewish studies at Eton, was enthusiastic about the success of the program. “Yesterday saw the most powerful expression possible of Am Yisrael Chai . . . Even at Eton College!” he wrote in a note of appreciation.

“To see the boys some for the first time putting on Teffilin and so keen to understand and take part was to say the least very moving.”

In his thank you note, he observed that one particular boy who’d never had a bar mitzvah “was so moved that tears were in his eyes. It was as if he had finally come home after a very long journey.”

Mr. Paull thanked Mr. Tajtelbaum for the gift of siddurim and kippot. “I am sure these items will travel with many of the boys in years to come and remind them ofthe time they first put on teffilin.”

Rabbi Simon says he was invited by Eton to return and will introduce the students to another mitzvah when he next visits.