At Brandeis University, Students To Host Gala In Support of Chabad 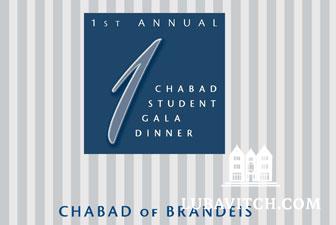 (lubavitch.com/LNS) The dynamic at Chabad on campus is typically a simple one: Campus Shluchim give and give, and then give some more. A warm home where students can always find someone willing to listen, someone ready to teach, Shabbat dinners, holiday celebrations, and whatever else comes up for students living on campus pining for a place to call home.

This kind of love costs Rabbi Peretz and Chani Chein at Brandeis University, more than $200,000 a year.

But what the Cheins give, says Cindy Kaplan, a student at Brandeis,“is priceless."

So on February 10, she and other students at Brandeis University will be giving back.

They’ll be hosting a formal gala on behalf of the Chabad Student Center.

A student-run committee is shouldering responsibility for the entire dinner. Several weeks before the event, the guest list reached 100, with each of them committed to raising $180 for Chabad from friends and family. Most participants have brought in well above that amount.

“People have been raising money to come to the dinner because they feel that Chabad has given them something that is priceless,” admits Cindy.

“Until I found out about Chabad, I didn’t have anywhere to go on Shabbat. I felt disconnected from Judaism. Without Peretz and Chanie, my college experience would not have been as great as it is.”

It’s why Kaplan joined the committee as co-chairperson even though she is already shouldering coursework for her American Studies, Creative Writing and Journalism degrees and planning a film festival.

The committee of ten has gotten a taste of what it means to run events such as the Cheins have done for the past seven years. They’ve picked savory dishes with the caterers, rounded up music majors for background jazz, hired a caricature artist to entertain guests, and planned the decor. They’ve published a dinner journal, and produced a Chabad highlights video.

Dinner co-chairperson Yael Klein, a psychology major graduating this year, said the enthusiasm for the event starts with simple appreciation. “People come and go at Brandeis, but Chani and Peretz host us every Friday night. It’s a real community,” she says, that the Cheins have created for Brandeis students.

“At some point, after you eat at someone’s house enough times, you feel like you need to give something back.”

Shabbat dinner on Friday night, attracting 150 students each week, is the centerpiece of Chabad’s activities. Hosting the dinners, events and classes costs Chabad over $200,000 a year. Other programs, like the iLearn semester of study have 90 students attending an array of classes.  400 students whooped it up at Chabad’s Purim celebration.  Mortagage payments, salaries, paper goods, chicken and hamantashen pastries do not fall from the sky. Expenses over the second half of 2007 added $12,000 to an existing deficit.

When the Cheins included a fiscal report in their newsletter, it was an eye opener for their supporters. Few knew that their campus Chabad center had no big financial backer to fall back on.  Most donations to the center last year were modest in size. Of the 261 donors who gave to Chabad last year, only nine gave in amounts above $2000.

Though the dinner is the largest event planned by the students, it is not the first. Students initiated and ran a Phone-a-thon that brought in $8,175 in 2007.

Serving a transitory, empty pocketed population of students is a tough road that 100 Chabad campus centers follow. Generous Rohr Family Foundation grants provide seed money, cover portions of building expenses, get the centers started. After a set period of time, the centers have to flap their wings and fly. Thanks to the deep connection students feel with Rabbi Peretz and Chanie Chein’s Chabad work, they aren’t flying solo.

“I deeply believe that today’s college students are intelligent, mature and caring, and when challenged will respond enthusiastically. I saw this with iLearn and now with the gala,” said Rabbi Chein.

At the dinner, those who say students come to Chabad solely for the free food will eat their words, in three courses.