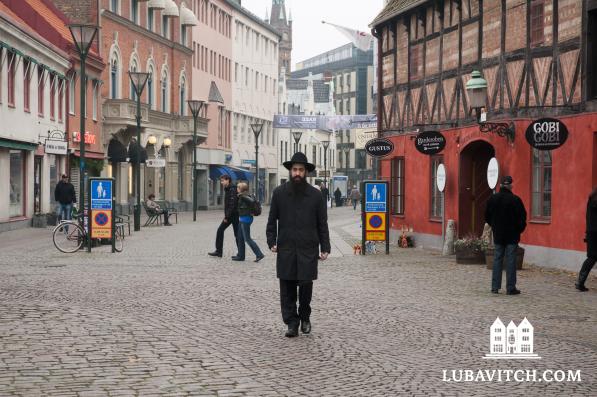 Although it would surprise no one if the Kesselmans were to pack their bags and leave Malmo, Paulina, the child of Holocaust  survivors who came here after the war, shudders at the thought.

It’s hard to remember the last time Malmo had a rabbi that had stayed on for as long as Rabbi Shneur Kesselman has. Until 2004, when he and his wife arrived in Sweden’s third largest city to serve as Chabad emissaries, the community had tried hiring rabbis from abroad. But that didn’t come easily, and most moved on after only a few years.

Paulina Klein, the former Vice President of Malmo’s Jewish community, remembers the city in her childhood years after the war, when the Jewish population reached a high of 4000. In recent years, with limited economic opportunity for young Jews and the rise in anti-Semitic incidents by the influx of Muslims, the city has been bleeding its Jewish population. Today only 550 Jews are members in the organized Jewish community.

In an interview, Fred Kahn, Chairman of the Board of Malmo’s Jewish community spoke of changes to the city’s 150-year-old Jewish community. “We have good connections with the police and authorities so, on that level it’s much better today than it was 5-6 years ago.” There’s also some constructive dialoguing taking place between different ethnicities and at schools where issues of anti-Semitism are addressed.

Despite the high rate of anti-Semitic hate crimes which have allegedly tripled in recent years and have gone unchallenged, Kahn seemed hopeful about the city’s Jewish future. In terms of Jewish identity and Jewish engagement, he described the Kesselmans as a positive force for this struggling community.

Rabbi Kesselman estimates that there are least another 1000 Jews who, for whatever reasons, choose not to join the community. It is for all of them, “those who are affiliated and those who are not,” he says, that he and his wife Reizel, from Toulouse, France, have put down roots here.

“We are here to support and strengthen the organized Jewish community, and for the Jewish population as a whole. We feel a responsibility to be here for the Jews who continue to live here.”

Although it would surprise no one if the Kesselmans were to pack their bags and leave Malmo, Paulina, the child of Holocaust  survivors who came here after the war, shudders at the thought. “Without the family Kesselman, Jewishness in Malmo would suffer an enormous loss. So much of the community’s yiddishkeit is provided by them.”

Shneur and Reizel, themselves both children of emissaries, are not planning to leave. Instead, they pack their days with activities that make Jewish life sustainable, even rewarding for the locals here. They’ve developed numerous educational programs to address all age groups within the Jewish community, but are particularly focused on nurturing a strong Jewish identity among Malmo’s youth.  “After all, they are our future,” says Shneur.

Youth programs like the Gan Israel summer and winter camp have become very popular, drawing children even from families who don’t otherwise affiliate. This year, the Kesselmans will launch a Jewish Learning Initiative (JLI) for high school students. Educational programs designed for young Jewish families that convene around the holidays “are attracting Jews from all backgrounds and have successfully drawn many into greater Jewish engagement.”

In the course of a typical week, Reizel will lead private bat-mitzvah lessons and weekly adult educational classes for as many as 20. For those who live too far away but want to expand their Jewish knowledge, Reizel offers lessons via skype that covers topics like the laws of mikvah and kashrut.  She teaches in the Jewish kindergarten and leads a Jewish afterschool program. Some weeks will find her working closely with a Jewish bride to prepare her for her wedding. And every week, she’ll put together Shabbat meals where she and her husband host numerous guests.

With no other rabbi to share the responsibilities, Shneur is, unofficially, Malmo’s chief rabbi. He leads classes in Talmud, Jewish law, Chasidut and Bible. He prepares boys for their bar mitzvah, is called upon by individuals who want to kosher their kitchens, put mezuzahs on their homes and offices, officiate at Jewish chuppahs and at burials. Like his wife, Shneur is a counselor, a mentor and a teacher of applied Judaism. As their “students” move to friendlier destinations, the Kesselmans stay put and purposeful, hewing faithfully to the Lubavitcher Rebbe’s calling, as Shneur says, “to be here for any Jew, no matter who he or she is, no matter what they need.”

MOVING UP. MOVING ON

Rebecka Norman, 30, made aliya four years ago after completing her law studies in Sweden and exploring Judaism with Reizel and Rabbi Kesselman.

“The Kesselmans brought a revival to the community. Rabbi Shneur is the only Orthodox rabbi in the community so he filled a real gap. He means so much to this city.” He is especially good, she says, at drawing Jews out of the woodwork.

“I don’t know how he does it, but he finds people I’ve never seen, and I’ve lived in Malmo my whole life.”

Jehoshua Kafuman, Malmo’s Jewish community’s spokesperson, concurs. The Kesselmans “do a really good job finding Jews and making them active,” he told lubavitch.com.  They have also contributed significantly to the openness that was so uncharacteristic of Swedish Jews before they came. “You cannot compare the openness that Jews have here today to the way it was 10 years ago,” he says.

Rebecka had become a regular presence in the Kesselman home where she participated as a family member, learning along the way about Jewish observance. This eventually prompted her decision to move to Israel.  Reizel says that’s a good thing, a sign that she’s moving ahead in her Jewish involvement.

“Many of the people who develop a strong Jewish identity eventually leave,” she notes matter-of-factly, despite the fact that having them remain would make life easier for the Kesselmans as well as for the community.

When the Kesselmans first settled in Malmo, they worked with people who were more familiar with Judaism and with basic Jewish traditions. Today’s population of young Jews, says Reizel, were raised with less awareness of their Jewish heritage, so Reizel and her husband are often busy teaching the very basics.

More than formal educational programming or even one-on-one sessions it’s the way the Kesselmans have invited the Jews of Malmo into their own personal lives that has had great impact. Many participate in the family’s life cycle events which the Kesselmans celebrate with the community. Close to 200 turned out for their son’s upshernish (haircutting ceremony for a three-year-old boy).

COMING OUT AS JEWS

Coaxing local Jews out of hiding takes sensitivity and confidence. The Kesselmans see Jewish holidays as educational opportunities, and make the most of them. Reizel recalls the sensation that her family’s backyard Sukkah created. “For many, it was the first time they entered a Sukkah outside of the Synagogue’s enclosed garden. Sitting in a Sukkah in a public area surrounded by ordinary non-Jewish Swedish homes and making blessings out in the open was strange to them at first, but now it has become normal for so many,” she says.

“Today, everyone expects the invitation to the Sukkah. It’s become important to them.  If they can’t join us for a holiday meal, the will call us and ask to come drink a coffee in the sukkah. They want to experience the mitzvah, and that’s the idea—to make Jewish observance possible here.”  This year more than 200 people, young and old passed through the door of the Kesselman’s Sukka.

Similarly, Chabad’s public menorah lightings “have become very, very popular here,” says Jehoshua Kaufman, pointing out that these events have gone a long way towards fostering greater openness and pride in Jewish identity in Malmo. Paulina remembers the first years the Kesselmans put up a public menorah in the city’s center square in front of the old city hall. “Everyone was a bit nervous about it, but now maybe 200-300 people show up for the menorah lighting.”

All of such public events require police protection and additional security provided by the community. In our conversation, Rabbi Kesselman doesn’t talk much about the anti-Semitic attacks he’s sustained, and the extreme vigilance he must practice anytime he leaves his house or moves around in the city. When asked directly about it, he says that he has taken up this issue in many interviews both on a national as well as international level.

“This is an issue the public needs to be aware of so that they can respond, and I fear that if this is not stopped here in Malmö, it can continue and develop into other areas in Sweden and even further out.”

But in this interview, the rabbi prefers to talk about his work to strengthen Jewish identity in Malmo.

“That’s Shneur, he focuses on the good stuff,” says Rebecka. She recalls that while interning for a lawyer, she came across “binders with tons of police reports about Shneur being harassed and being chased out of buses.

“That’s when I realized how bad it is.”

Ilmar Reepalu, Malmo’s mayor of 17 years who did not endear himself to the Jewish community by blaming Jews for the local anti-Semitsm, was recently replaced by Katrin Stjernfeldt Jammeh, a social democrat. She spoke critically of the mistrust created by her predecessor, and Malmo’s Jews are now hoping that she will be more responsive and aggressive about cracking down on anti-Semitic incidents. Reizel is hopeful that this will make life less stressful for the Kesselman family, especially for her husband. By his presence alone, says Paulina, the rabbi has impact.

“When Rabbi Kesselman walks in the city, he stands out, so for some Jews here, maybe it touches their inner conscience.” Others, she says, might feel uncomfortable by such an unabashed display of Jewish identity. But by and large, a community that was at first cautiously suspicious of the Chabad rabbi, she says, has come to feel grateful and appreciative of the Kesselmans.

“I can say I think the Kesselmans are heroes, really brave to be living here, because they don’t have anyone else that has their standard of religiosity. They are doing great work here and they are really needed here.”