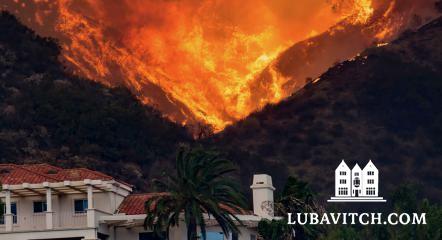 At about 1:34 on Monday morning, a eucalyptus branch fell onto a power line in the hills of Brentwood, California,  sparking a fire that quickly burned more than 500 acres. By 3:15 the LA Fire Department’s emergency system had ordered the evacuation of some  10,000 homes.

As Rabbi Baruch Yosef and Channa Hecht at Chabad of Brentwood were woken by the LAFD call, they discovered that their home and Chabad House were just four blocks outside the evacuation perimeter.

Looking out of the window, they could see cars beginning to pull up in the parking lot of the supermarket next door. “They had been pulled out of bed by the call, piled their families into their cars and they stopped at the first clearing they could find to assess what they would do next,” Rabbi Baruch shared with Lubavitch.com.

The Chabad House has an outdoor sound system, so the Hechts set it to play music letting people know they were open, and went out to the parking lot to see how they could be of help. They took all the toys left over from their High Holiday children’s services and distributed them to pajama-clad kids. They set up hot drink stations and snacks and invited people in to refresh and use the bathrooms.

The rabbi heard people on the phone telling their loved ones not to worry because the Chabad is open. “We had never met many of these people, but they knew who we were and that we were there to help,” Hecht said. This included an eighty-something year old diabetic, and his wife. The Hechts brought the couple into their home, settled them on a comfortable couch, fed them breakfast and arranged for the husband to receive his dialysis there. 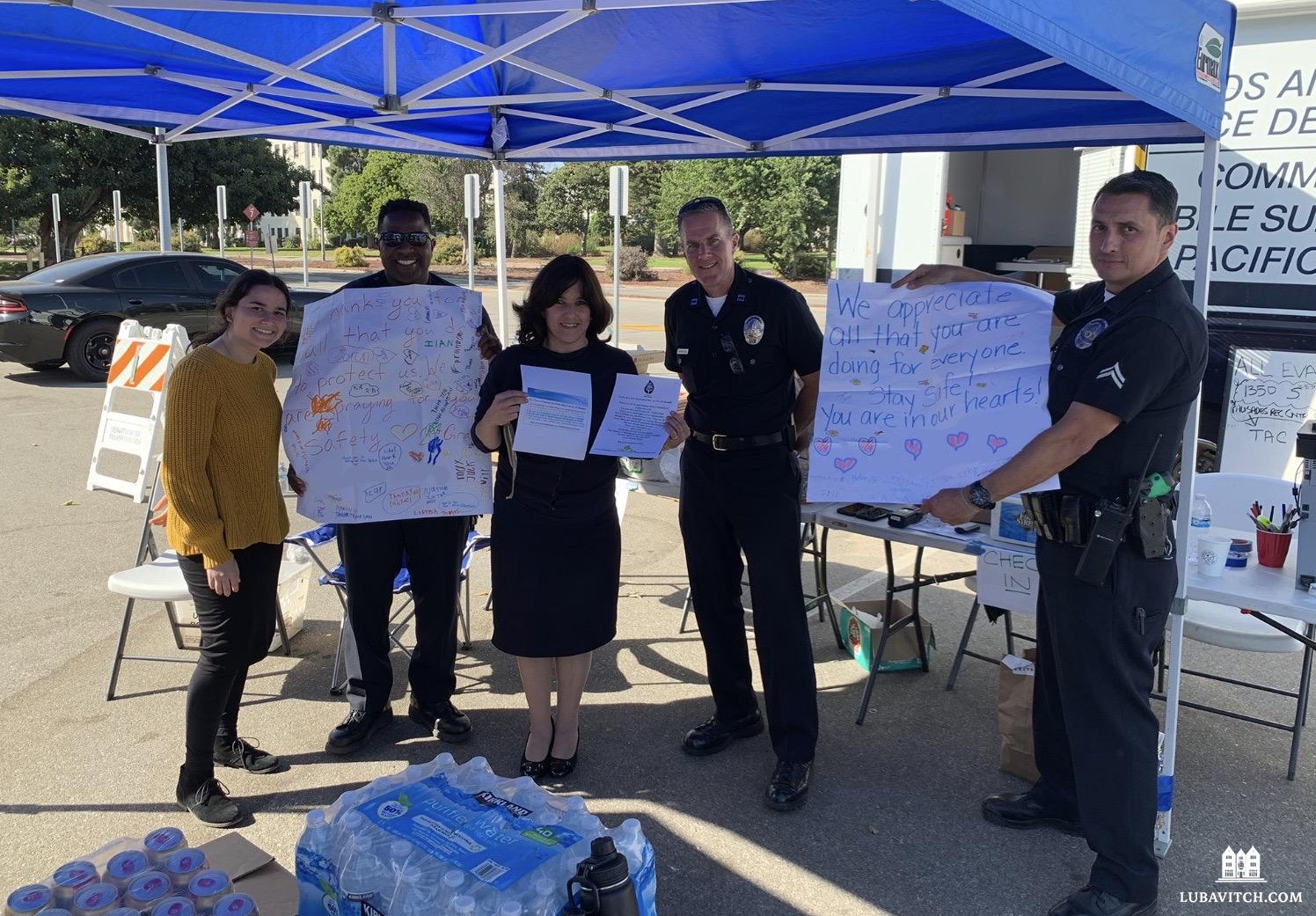 When day broke, Rabbi Hecht offered to don tefilin with any Jewish men present. One evacuee, an eighty-eight year-old, said the last time he wrapped tefillin was on the day of his Bar Mitzvah, seventy five years ago.

Between three fifteen in the morning and noon, around 300 people came through the Chabad House. As of now, schools, including the Hechts’ preschool, remain closed due to poor air conditions. With record winds blowing through Tuesday and Wednesday the fire department worried about embers reigniting and evacuation orders remained in place.

Twelve homes were lost, but there were no injuries or fatalities. “It’s miraculous and we are so grateful,” says Channa.

By Divine Providence, she says, just hours before the fire began, her husband hung a record of fifty-two mezuzahs at homes in the very hills that would soon be a part of the fire zone. People had ordered mezuzahs over the High Holiday period and the first opportunity they had to install them was Sunday.  The mezuzah is a mitzvah that brings divine protection to the home and its residents.

Additionally, over the Holidays, the Hechts had distributed Tzitzit—the four cornered, stringed garment worn by males under their clothes— to the hundreds of people who attended services at Chabad. This was something they had never done before and like mezuzahs, the mitzvah of wearing tzitzit is described in Jewish tradition as providing a measure of  Divine protection. “I don’t know what inspired us, but the idea really caught on. People didn’t just take the tzitzit, but they actually wore them over the holidays,” Channa says. “The mezuzahs, and the tzitzit,” she said, “brought spiritual protection.”

As people moved on and found places for their families to stay, the Hechts set out to support the first responders. Along with volunteers from their CTeen chapter, they distributed forty pies of pizza, soda, water, thank you letters, and ‘Good Cards’ with details of the seven Noahide Laws. 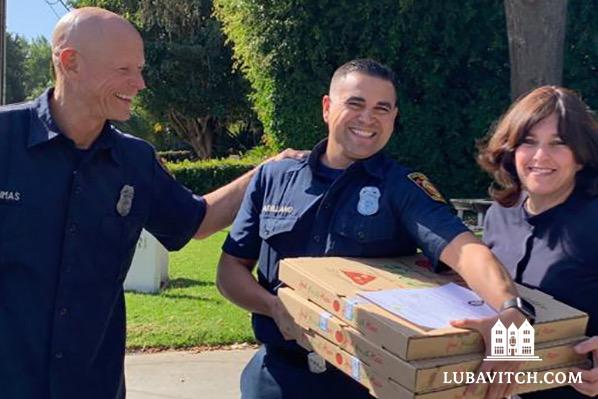 Rabbi Zushe and Zisi Cunin of Chabad of the Palisades are slightly further from the danger zone. As soon as they heard the evacuation orders they began calling seniors they know, to check up on them. They sent volunteers to help people evacuate and assisted those who needed help finding a place to stay. The Cunins have many children living at home, but that didn’t stop them opening their home to those in need.

Monday morning, while the Cunins were on alert for possible evacuation, they invited a ninety-two year old woman to come and stay at their house. She and her dog will stay with the family until their mandatory evacuation order is lifted and they can return home. This is proving to be a learning curve for the Cunin kids. “When you have a large family, there’s not much space for pets, but they’re getting used to having the dog around the house” Rabbi Zushe says.

The Cunins’ Chabad school is also closed, and they’ve been keeping in touch with parents and families, sending activities to help keep the kids entertained and staying in touch to ensure everyone’s ok. A team of volunteers have been visiting evacuation shelters offering support, assistance and tefilin, and also looking out for the First Responders.

The Palisades was plagued by local fires over the High Holiday period. “We are very grateful to the emergency services,” Cunin shares with Lubavitch.com. “This has been a busy period for them, yet they have been amazing, tirelessly fighting to keep us all safe.”