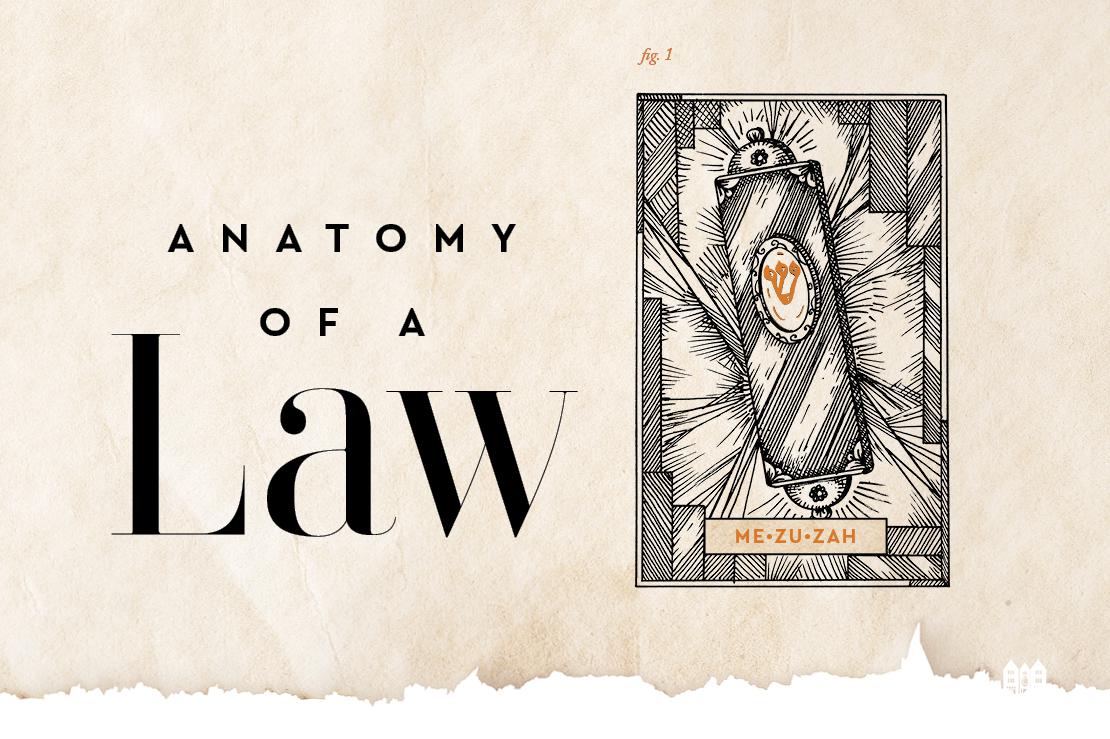 Anatomy of a Law

Most commandments in the Torah are so cryptic that a straightforward perusal will leave the reader without the knowledge necessary to understand or fulfill them. So the details are elucidated in the Oral Law, which was given at Sinai and transmitted by the sages of the Talmud and their subsequent exponents. Here we chose to illustrate this process with a sampling of interpretations derived from the mitzvah of mezuzah.

The commandment about mezuzah appears twice in Deuteronomy (6:9;11:20):

You should write them on the doorposts of your home and in your gates.

The bible gives no specific instructions: What should be written on the doorposts? Below, is a glimpse into the intricacies of Torah interpretation, as sages collaborate across the generations to parse and analyze this single commandment.

“You should write them” וכתבתם

What should you write?

The Talmud (Menachot 32a; as explained by Rabbi Betzalel Ashkenazi (16th century) in his Shita Mekubetzet) determines from the context and placement of the command, that the two passages of Shema and Vehaya are to be written in the mezuzah.

Maimonides (Laws of Mezuzah 5:4) states that the custom is to inscribe G-d’s name “Shadai” on the outside of the scroll.

What should be used to write the mezuzah?

The Talmud (Menachot 34a) interprets the word “write” to mean to inscribe upon a parchment scroll with ink.

What kind of parchment scroll?

The Talmud (Shabbat 108a) derives from another verse in the Torah that it must be parchment from the hide of a kosher animal.

“On the doorposts” על מזוזות

The Talmud (Menachot 33a) interprets this to mean that the scroll should be posted on one doorpost, on the right side of the entrance to the room.

Where on the doorpost should the mezuzah be affixed?

The Talmud (ibid) divides the doorpost in three, and states that the mezuzah belongs on the bottom of the top third of the doorpost.

The Shulchan Aruch [Code of Jewish Law] by Rabbi Joseph Caro (16th century, Toledo, Spain/Safed, Israel — Yoreh Deah 286:15) determines that even if there is no door but a frame defining the entrance to a room, you must post a mezuzah.

How exactly is it to be positioned on the doorpost?

Rema (Rabbi Moshe Isserles, 16th century, Krakow, Poland – Yoreh Deah 289:6) settles the matter on a compromise. The mezuzah is to be affixed on a slant.

What qualifies as “your home”?

The Talmud (Yoma 10b) interprets this to mean a permanent dwelling, rather than a temporary one.

Maimonides (Laws of Mezuzah 6:10) states that it means that each room in the home  needs a mezuzah in every entrance.

The Talmud (Sukkah 3a) defines a room as having a minimum size of four by four cubits.

What are “your gates?”

The Talmud (Yoma 11a) says that this also refers to the gates of cities.

The Torah even leaves the purpose of this commandment up to interpretation. According to the Talmud (Menachot 33b) and the Zohar (3: 263b), the mezuzah is a sign of G-d’s presence and protection in our comings and goings. Maimonides (Laws of Mezuzah 6:13) and Nachmanides (Exodus 13:16) add that a mezuzah is a public statement of our faith in G-d.