Amos Oz And The Rabbi of Rivne 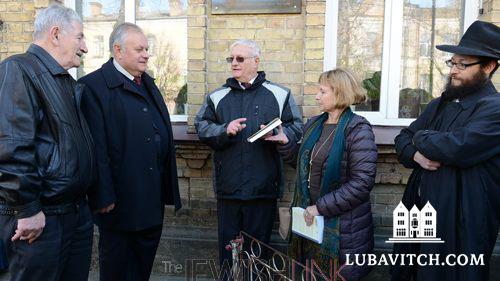 Amos Oz, the Israeli writer, novelist and journalist who won numerous awards for his books which were translated into some 45 languages, died on December 28. In the last years of his life, he formed an unexpected friendship with a Chabad rabbi.

Four years ago, Amos Oz struck up an unlikely friendship with the Chabad representative to Rivne (Rovno), Ukraine. Oz’s mother, Fania Mussman, was from what had once been a Polish city. The home that she had grown up in, described in Oz’s best selling autobiographical novel, A Tale of Love and Darkness, had since become a tourist destination for Israeli fans and readers. Now the Rivne municipality wanted to commemorate the Mussman family home.

Local authorities asked Rivne’s Chabad rabbi to collaborate with Oz’s children on a text for the plaque of the landmark home. The author’s daughter, Fania Oz-Salzberger arrived from Israel to participate in the ceremony. Her father followed the unveiling from Israel. Soon Oz would invite the Chabad representative, himself an Israeli, to visit him in his Tel Aviv home. Despite their starkly antithetical orientations, a serious friendship developed through visits and weekly conversations in their native Hebrew.

As it happens, Rivne’s Chabad representative is named Shneur Zalman Schneerson. This intrigued Amos Oz, whose second-grade teacher, one of Israel’s most famous national poets, was a first cousin of the Lubavitcher Rebbe, and named Zelda Schneerson. “We called her ‘Teacher Zelda’ and she was my first love,” Oz wrote in a WhatsApp message to the Chabad rabbi. “I was a seven-year-old and she was a woman of 30 or so, but this love has illuminated my life to this very day.”

Lubavitch.com reached Rivne’s Chabad representative in Israel, where he was paying a shiva call to the Oz family. Over the four years of their friendship, the author had taken a keen interest in Schneerson’s work to rebuild Jewish life and restore a traditional Jewish community experience for Rivne’s Jews. Oz also kept up with Schneerson’s family, sending personal notes on the births of his children and their birthdays, and regular Shabbat and holiday messages.

Schneerson would visit Amos Oz whenever he traveled to Israel. On one of his visits to the Oz home in Tel Aviv, he brought a new edition of The Tanya that he had just printed in Rivne. “Amos buried his head between the pages of the Tanya, inhaling the scent of the fresh ink,” recalls Schneerson. And then the award-winning author “apologized and asked for privacy so that he could be alone with, in his words, ‘this holy book that was printed in Rovno.’”

By no means a religious Jew, Oz sometimes revealed a spiritual side. Asked by an Israeli journalist in one of his last interviews what he hoped his most important legacy would be, he said that if any of what he had written over his lifetime would move people in some way, “I will have something to show for myself at the entrance On High.”

Over time, the author seemed to take more of an interest in Jewish practices. “Four years ago, I had offered to say the Yizkor prayer for his mother and grandmother,” recalls Schneerson. “Amos wasn’t interested.” But in a text message that Oz sent a few weeks ago, he asked the Chabad representative to say Kaddish on behalf of his wife and his children: “Please say the Kaddish in our name for all the sons and daughters of the Mussman family and all the Jewish people who were murdered in Rovno.”

This past September, Schneerson brought his young son, Levi Yitzchak, to Israel. “There’s no yeshiva in Rivne, so we enrolled him in a yeshiva in Jerusalem.” It was the opening day of school, but first father and son paid a visit to Amos Oz.

“By then the cancer treatments had weakened Amos, but he welcomed me with great warmth,” recalls Schneerson. “I told him that my son was beginning yeshiva that day, and Amos beamed with what I can only describe as pride.”

It was shortly before Rosh Hashana, and the Chabad representative had brought a shofar along with him. “Amos became pensive. He seemed lost in thought as I blew the shofar, and he remained that way for some time after, even as his wife, Nili, began chatting with me about her grandchildren.”

He later sent a text message, thanking Schneerson for the visit, and wishing “Levi Yitzchak much success on his first day in yeshiva.” The message was signed, as many of them were, “Nili and Amos.”

When Schneerson turned 40, he received a long, beautiful note from Oz expressing gratitude for the Chabad representative’s work “to memorialize Rovno’s Jewry, among them many of my own family murdered by the German Nazis and their cohorts.”

“You have merited to bear a name [Schneerson] that carries a unique legacy,” wrote Oz. “In you, I found an interesting sparring partner . . . a lover of the Jewish people, with a warm heart and a wise heart.” He ended the message with an allusion to the Hebrew acronym for ChaBaD, wishing his friend many more years blessed with “Chochma [wisdom] Binah [understanding] Daat [knowledge].”

Schneerson will miss the rich conversations and the weekly exchanges of emails and chats. The unexpected friendship prompts some to ask him if Amos Oz had become religious at the end.

Related Articles
View All
Zelda: Remembering an Israeli Poet
(lubavitch.com) Among the poets in Israel’s literary circles, many quietly remembered Zelda Schneurson Mishkovsky on Tuesday (April 21) 27 Nissan. That Zelda, as she was…
Get Inspiration to your inbox!
Newsletter
Join our weekly newsletter for inspiration and updates
Donate
Find Your Local Chabad Center
Chabad
About Chabad-Lubavitch
About Chabad Lubavitch
The Rebbe
Headquarters
Magazine
Magazine
News
News & Updates
In The Media
Impact
Social and Humanitarian
Social and Humanitarian
Education
Education
Community
Community