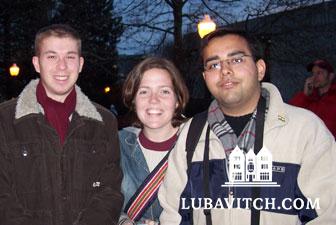 (Lubavitch.com) Chabad-Lubavitch of the Virginias is fast approaching the finish line in its sprint to secure a property on the Virginia Tech campus.

They've located a building and have raised 90% of the $1 million needed to turn the B&B into a student center that will serve as "a home of healing, joy and spiritual fulfillment to Virginia Tech's" 1500 Jewish students.

In Jewish tradition, there is no greater act of heroism than the kind that Liviu Librescu demonstrated last April 16 at the Virginia Tech campus. But heroism of this nature is universally appreciated, prompting one non-denominational website to recently name Librescu the “Most Inspiring Person of the Year 2007.”

“I have students coming up to me every day—non Jewish as well as Jewish—who continue to be inspired by the professor’s heroism that transpired here on our campus,” Rabbi Elazar Bloom, Chabad representative to Virginia Tech and the Librescu Student Center, with his wife Rivkah, tells Lubavitch.com

The Romanian-born, Israeli-American professor of engineering at Virginia Tech, blocked the door to his classroom with his body, giving students time to escape through the classroom windows until he was finally gunned down by a disturbed student randomly firing a gun.

His death was tragic, but the inspiration of his gallantry has taken on a life of its own.

Even beyond the Blacksburg campus.

Roanoke, Virginia, 40 minutes away from Blacksburg, has a Jewish population of about 1000. Some of them have reached out to the Blooms and invited them to become active in their community’s Jewish life. Recently, a local Roanoke Hebrew school came with community members to Virginia Tech to participate in Chabad’s menorah lighting there.

The event exuded a welcome warmth and light, prompting one community member to reflect: “This campus has been here since 1872, and until this menorah lighting, there’s never been a public display of Judaism like this.”

It’s a real comfort to the widow of the slain professor, Mrs. Marilena Librescu, who speaks with Rabbi Yossel Kranz, director of Chabad of the Virginias, daily.

“She’s keenly interested in knowing how things are going, and the progress we’re making on the Librescu Student Center,” explains Rabbi Kranz, now in a last run to raise the final $100,000.00 for the  building they must secure by January 10.

The student center was established by a grant by the Rohr Campus Foundation, and will work side by side with Hillel activities at Virginia Tech.