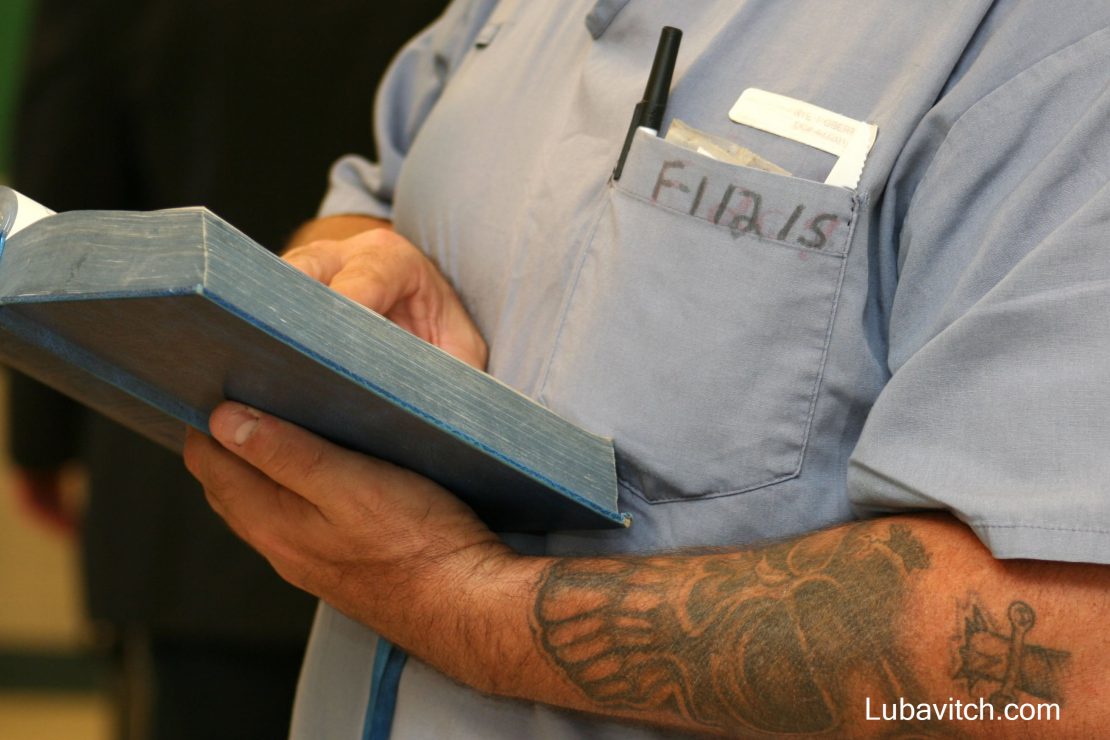 It was the stuff nightmares are made of. After a 35-year legal career, Avraham faced federal fraud charges. Despite an impressive 25,000 transactions flawlessly executed, prosecutors were falsely accusing him of egregious crimes and threatening thirty years behind bars.

“Rabbi Vogel reached out to me two years into my case,” shares Avraham. “He checked me out and said, ‘You’ve done a lot of good professionally and throughout the community. Now it’s time for us to do something for you.’” Vogel stepped in and fought for alternative sentencing and today, Avraham works in his Pittsburgh community through a probationary program.

Rabbi Moshe Mayir Vogel is the Executive Director of the Aleph Institute-North East Region. Together, with a team of social workers, Vogel ensures that “No Jew is alone,” behind bars. Aleph coordinates kosher food, visits, and Torah classes for inmates. The organization also supports the families left behind. And when a sentence is complete, Aleph helps prisoners reintegrate into society, which, Vogel explains, “is a huge and very painful transition.” According to studies, without support an ex-offender will reoffend. The national rate of recidivism is 76 percent. For Aleph clients, it is less than ten.

Clearly, the organization is doing something right. But, insists Vogel, it’s not enough.

For decades Vogel has been a vocal proponent of alternative sentencing that allows non-violent offenders to avoid prison. Instead, these individuals remain home to maintain a job, community service commitment, therapy, and religious services. “They need to pay a price for their crime, but being a burden on their family and society is not the answer,” insists Vogel. A real burden it is: housing one prisoner costs the government (and taxpayers) fifty thousand dollars annually. Vogel believes that the money should be directed to private organizations, like Aleph, to help them effectively rehabilitate offenders.

Since the 1990s, Vogel has been championing alternative sentencing for hundreds of Jewish prisoners like Avraham, who are convicted of white-collar or drug crimes. Now, he is teaming up with African American faith leaders to create a similar program in their community. Thanks to a grant from the Pittsburgh Foundation and County funding, six individuals are already enrolled in Aleph’s pilot. “It’s a win-win,” declares Vogel. “To what benefit is prison, when a person can be rehabilitated and a productive member of society?”

One of the individuals he is advocating for is a 75-year-old man who has been in prison for most of his life. As a teen, the inmate was arrested for riding in a stolen car. After escaping from a juvenile detention center twice, he was thrown into a maximum-security prison. When a fellow prisoner, a member of the Aryan Nation, tried to kill him, he slayed him first. The act of self-defense landed him a life sentence. Aside from his advanced years, the inmate suffers from stage four cancer, diabetes, and heart disease.

“He probably doesn’t have much longer in this world,” says Reverend Tim Smith, director of Pittsburgh’s Center of Love Foundation, where his mission is to improve the lives of Pittsburgh’s African American community through a host of educational and financial programs. “We want to get him out to be with his family.” Smith has teamed up with Vogel to arrange a compassionate release or a commuted sentence for this prisoner.

Now that alternative sentencing is accessible to the Pittsburgh African American community, there is a lot more preventative work to be done. “Until I met Rabbi Vogel, I was focused on local things I could do for those convicted, like going to court and standing with their families and helping them understand the law,” Smith says. “Getting them out of prison through alternative sentencing is a great first step.” Smith and Vogel are discussing further ways to promote judicial reform.

“Everyone deserves to be helped,” Vogel says. “It is a lot healthier, for everyone, when they are not in prison.”

Vogel’s work is reaching the higher echelons of government, both because of the positive buzz he’s generated and direct lobbying. A groundbreaking judicial reform act he supported, The First Step Act, passed Congress and was signed into law by President Trump in December of 2018. It’s an important piece of legislation, but, agree proponents of reform, it is merely a first step. The current law allows wardens in the Federal prison system to release inmates into society. It does not provide the framework for alternative sentencing before imprisonment. Currently, Pittsburgh is the only city with an active alternative sentencing program.

Two years ago, Judge Joy Flowers Conti, a Senior District Judge in Western Pennsylvania, spoke about Aleph’s influence at the judiciary level. “What a fantastic organization the Aleph Institute is,” she told a crowd of supporters and probationary officers. “What good work they are doing. The Aleph Institute became the catalyst for our court to reach out and say, ‘Are there other organizations in our community that can serve the population of the ex-offender?’ If there is not a support mechanism, they cannot make it. Then, this creates a crisis in our communities. Crime begets crime and violence and the erosion of the community.

“You’re showing the world and you’re showing us in Pittsburgh, what can be done, how lives can be saved,” Conti declared.

“I’m just one person,” says Avraham, as he nears the end of his probationary period. “There are tens of thousands of people who should be eligible for this. Even though we are way behind as a democracy, (the United States imprisons more people than anywhere else in western society), there is hope. That’s what Rabbi Vogel and Rabbi Chayim Friedman gave me: hope, when no one else would.”