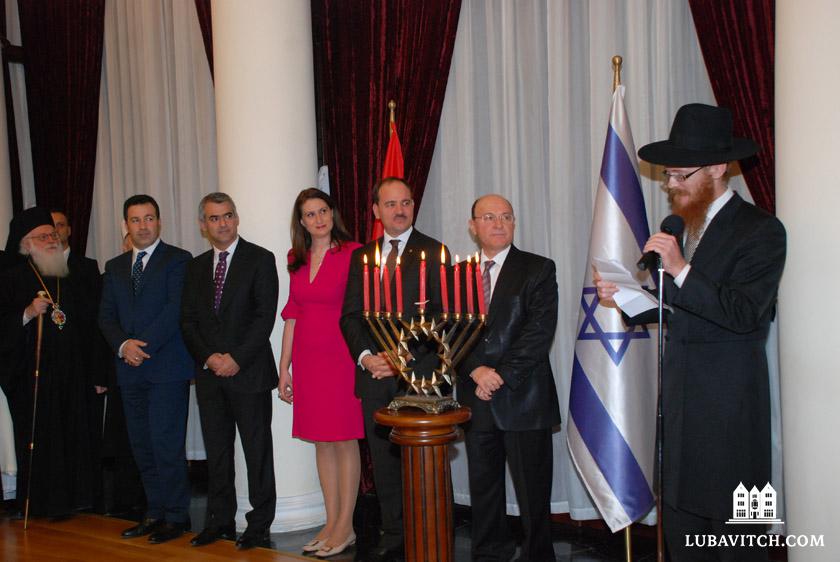 Do you know your Jewish trivia?

Try this: Which is the only country under Nazi occupation that had a larger Jewish population at the end of the Holocaust than when it started?

How about this: How many Jews live in Albania today?

If you’re going to look it up online, you’ll lose points. And Jews.

An internet search counts only 40-50 Jews in the Balkan state that sits on the Adriatic Sea.

But Yoel Kaplan, Chief Rabbi of Albania, has uncovered five times as many, or 242, to be precise. The majority of them—around 100—live in Tirana, Albania’s capital.

The itinerant Chabad representative based in Thessaloniki, Greece, is certain that there are more Jews, but “verifying Jewish ancestry is tricky,” he says.

It’s a similar situation in Macedonia, Montenegro, Kosovo, and Bosnia—where Kaplan travels regularly to serve their respective itsy-bitsy Jewish populations. Precious few records were kept during the years of communism when religious activity was verboten, so Jewish identity is difficult to trace.

Appointed chief rabbi of Albania by former PM Sali Berisha two years ago, Kaplan is sought out by many in Albania and its neighborhing states who believe they are Jews. The rabbi does his due diligence, working with each one to confirm their lineage.

“Many feel sad to learn that while they may have paternal Jewish ancestry, they are not halakhically Jewish.” Some are so disheartened, they insist on converting, so Kaplan refers them to rabbinical courts that oversee conversions.

“There’s such a deep-rooted desire by so many Jews to reclaim a lost heritage, but there’s been no infrastructure at all in these places for so long,” he told lubavitch.com in a phone interview.

The Chabad rabbi is on a mission to help these long forgotten Jews, and with every holiday, he makes arrangements to have Chabad rabbinical students come to celebrate with them. “They are elated when we arrange to celebrate Passover Seders, High Holiday Services, and Chanukah. “

This past Chanukah, Albania’s President Bujar Nishani invited Rabbi Kaplan to conduct a menorah lighting in his official residence. For Albania’s Jews, the high profile event at which the US and British Ambassadors participated, as well as numerous Albanian government representatives and the leaders of every religious denomination, was a rare opportunity to celebrate Jewish pride.

The invitation, notes Kaplan, was the outcome of a conversation he had with the President at the start of the Jewish New Year. “When we spoke around Rosh Hashana time, I suggested that it would be very meaningful for the state to publicly recognize its Jews and the Jewish tradition.”

BESA: A NATION STANDS BY ITS CODE OF VIRTUE

Albania has a Muslim majority, which makes the warm rapport Kaplan enjoys with its leaders and with most Albanian Muslims, unusual.  But the government and its people have a long history of good relations with the Jewish people. In fact, if you still hadn’t figured it out, Albania is the only country country occupied by the Nazis that had more Jews after the war than before: in 1939 there were 200 Jews in the country, and by the time the war was over, there were 2000.

Bound by Besa, a sacred code of hospitality that obligates Albanians to provide shelter and safety to anyone in need, Albanians protected Jews during WWII, taking them in even when the Nazis took over. Uncompromising about their creed: “My house is first G-d’s house, then it is my guest’s house, then it is mine,” they would sooner die, they say, than violate the code.

“Even when I come to Albania, the hospitality is incredible—they quarrel over hosting me,” said Rabbi Kaplan, who, dressed in Chasidic regalia, is often stopped by locals who ask for his blessings, or to have their picture taken with him. “The people here are extraordinarily warm, hospitable and respectful of Jews.”

(Kaplan, who resides with his family in Saloniki, comes often, so he has arranged for a small apartment with a kosher kitchen which is open to anyone who needs kosher facilities. “Some people who keep kosher and come here for short periods make use of the kitchen whenever they are here.” With no kosher shops, they will depend on foods that don’t require kosher certification, such as fruits and vegetables, eggs and other such food items.)

Shortly after 2008, when he was installed as the Chabad representative to Saloniki, whose northern border hugs Albania, the Chabad emissary began receiving calls from Jews in the surrounding Balkan states.

“I soon realized what a great need there was there, and even though there are small populations, that’s not the way we measure the worth of our investment,” he said.

“Every Jew matters. Every Jew deserves our help.”