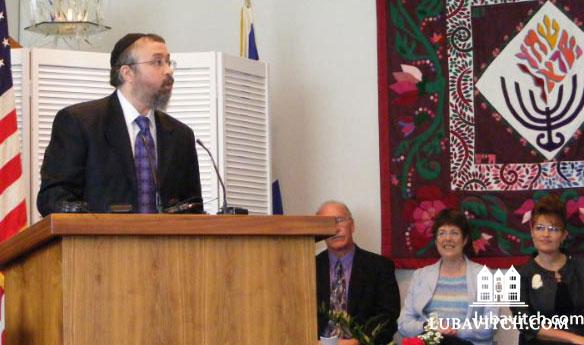 (lubavitch.com) Alaska’s Governor Sarah Palin, a relative unknown to most Americans until she was named McCain's running mate this Friday, enjoys wide popularity in her home state and the respect of the broader Jewish community there, Rabbi Yossi Greenberg, Chabad’s representative to Alaska’s Jewish community told Lubavitch.com.

“She’s established a great relationship with the Jewish community over recent years, and has attended several of our Jewish cultural gala events,” he said.

Palin has shown solidarity with Israel by signing a State of Alaska Resolution recognizing Israel's 60th Anniversary and its relationship with Alaska. In the resolution, Governor Palin pointed to Alaska’s special connection to Israel dating back to Alaska Airlines’ participation in the rescue of 40,000 Yemenite Jews when it airlifted them from Yemen to Tel Aviv during 1948 and 1949.
Drafted by members of the Alaska Legislation and heavily supported by Speaker of the House, Representative John Harris, Governor Palin signed the resolution in the presence of Alaska’s Jewish community leaders this June.

According to Greenberg, Governor Palin had plans to visit Israel with members of the Jewish community, which did not happen yet because of scheduling conflicts.

Though Greenberg was unequivocal in stating that Chabad representatives do not endorse political candidates, and as spiritual leaders reach out to anyone regardless of political affiliation, he did say, "We all feel that the Governor is a remarkable, energetic, and good person."