After Hate Crime, People of Flagstaff Show their Hearts 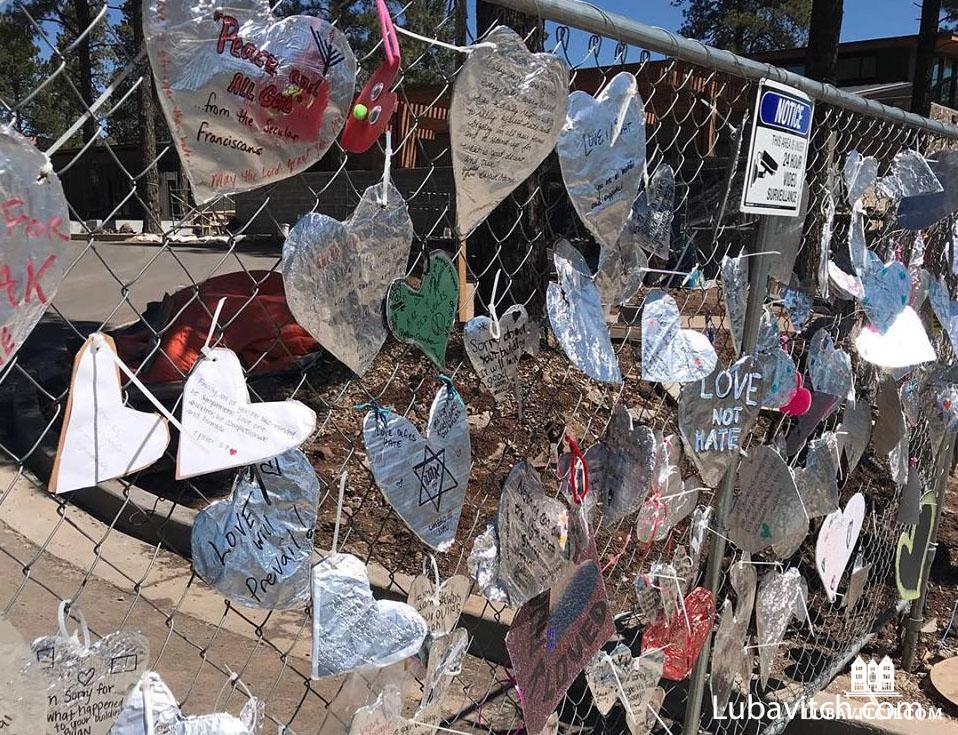 On Monday, March 25, Rabbi Dovie Shapiro, director of Chabad of Flagstaff with his wife Chaya, was horrified to discover vandalism at the construction site of the Molly Blank Jewish Community Center. Swastikas had been painted and carved into walls, black paint and plaster dumped on the grounds, and thousands of dollars worth of valuable equipment, tools, and supplies were irreparably damaged.

The 12,500 sq. ft. Chabad center being built on a hill overlooking Northern Arizona University is expected to open later this year. It will be the first of its kind in Flagstaff, which has never had a purpose-built synagogue or Jewish community center.

The Flagstaff Police Department is treating this as a hate crime.

“When people do acts of hate for no reason, the way to respond is with acts of love for no reason,” Shapiro told the reporter and photographer from the Arizona Daily Sun who covered the breaking story.

The photographer, Jake Bacon, took Shapiro’s words to heart. He posted his photos of the vandalism on his Facebook page, which elicited a huge response. Many people responded, wanting to know how they could help.

“I tried to think of something simple people could do that would demonstrate to Chabad how cherished they are, and how welcoming Flagstaff is. I wanted to encourage the community to show a blinding light that would dispel the darkness,” said Bacon. 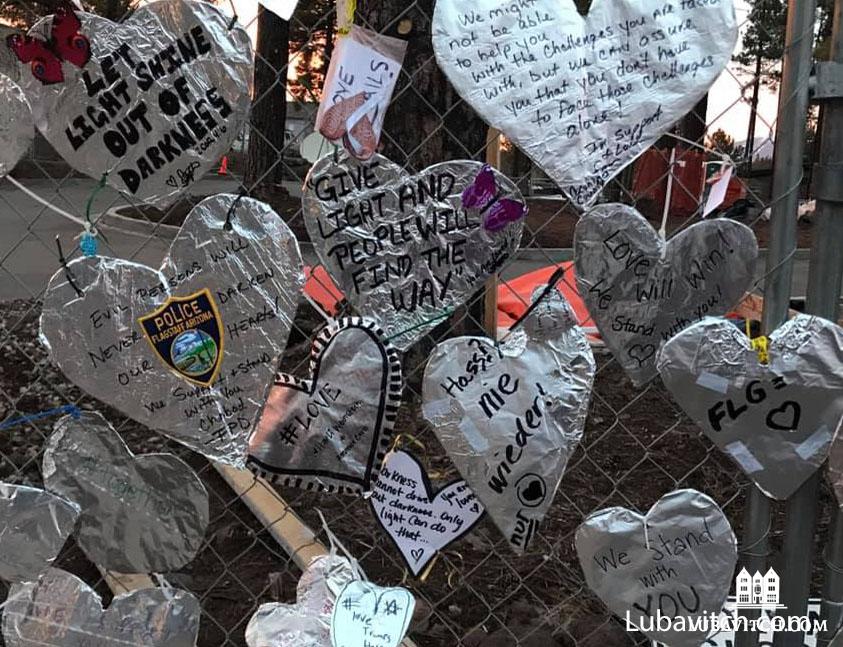 Bacon came up with the idea for people to cut out hearts from cardboard, cover them with foil, write supportive messages, and hang them on the fence surrounding the Chabad center construction site.

People of all ages, religions, and ethnicities came out to display their hearts bearing messages like, “Stay Strong,” “You are Loved,” “Love Shines Brighter than Hate,” and “We Stand with You.”

“Loving your fellow as yourself is an essential teaching of Chabad, and seeing all the hearts has lifted our spirits,” said Shapiro, who was profoundly moved by Bacon’s idea.

Teachers in the community used this episode as a teachable moment, talking to their students about standing up and taking action. “It’s not enough to wring your hands and say ‘how awful.’ If you believe it, do something about it,” the photographer said.

In an expression of unity, more than 150 people of all faiths and backgrounds, including the mayor, full city council of Flagstaff, and the County Supervisor, celebrated Shabbat dinner together at Chabad’s current center, down the street from the site of the new center. The rabbi invited everyone at the dinner to the grand opening of the new center, where he plans to display the foil hearts as a lasting tribute to the caring community of Flagstaff.

Chabad of Flagstaff has launched a campaign to help secure sufficient funds for security and to help them continue to build a welcoming home in the community. www.charidy.com/beyondhate 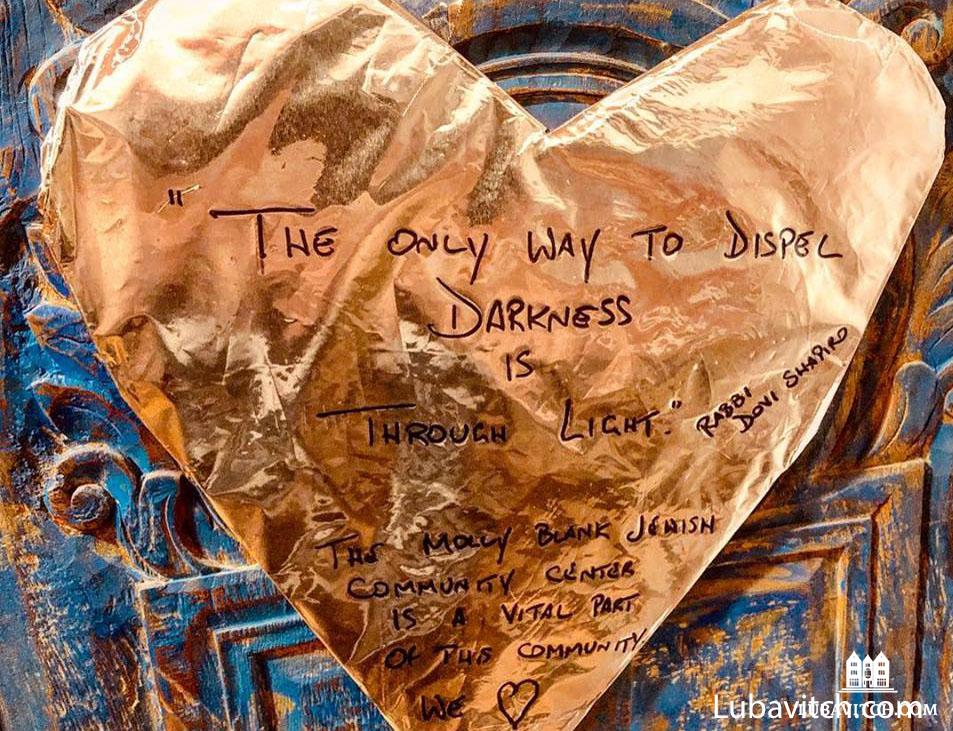 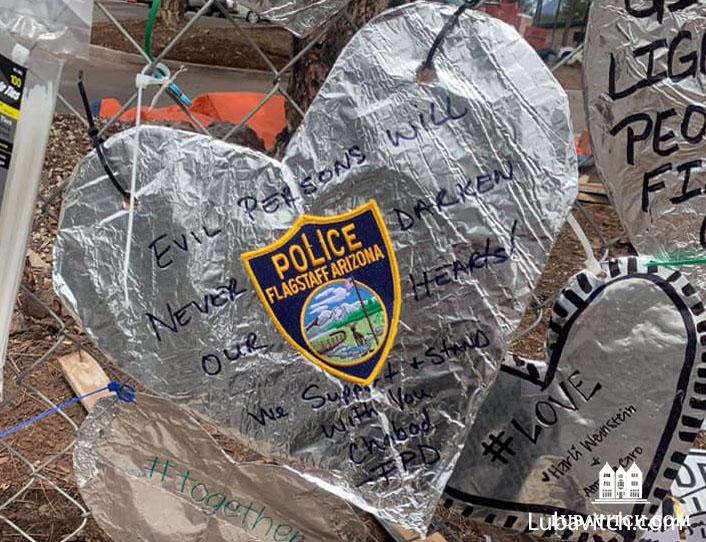 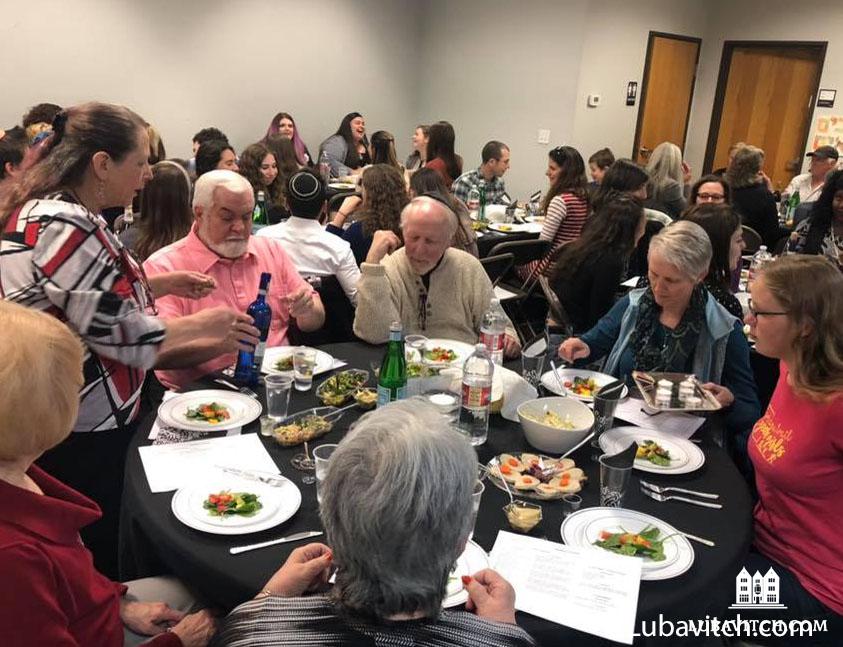 Unity Shabbat dinner (photo taken before the start of Shabbat)