After FIFA, Jewish Fans Grateful for Chabad of Brazil 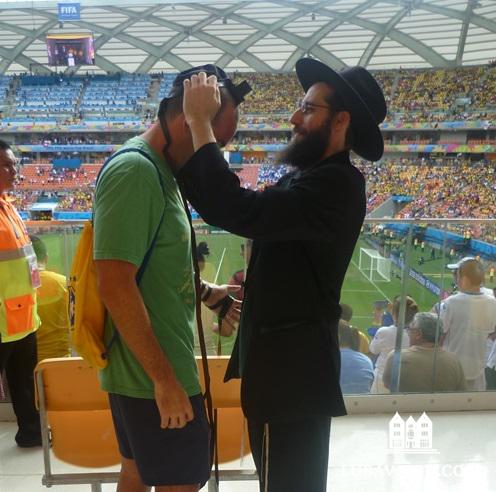 On Sunday July 13, the 2014 FIFA World Cup Final crowned Germany this year’s best international soccer team, concluding the world’s most popular sport tournament which took place from mid-June to mid-July. As Jewish fans from around the world lucky enough to attend the games in person pack up to head home, they return with an unexpected take-away.

While the Portuguese-speaking country boasts the second largest Jewish population in South America, the majority of that population lives in the country’s two largest cities of Sao Paulo and Rio de Janeiro. But for Jewish fans who wished to attend the actual games, which were held in 12 cities scattered across Brazil to accommodate the 32 international competing teams, options for religious services and kosher food were slim. That’s when they turned to Chabad.

Chabad of Brazil has an established presence in 14 cities throughout the Amazonian country, and in every host city its representatives were on hand providing religious services and kosher food for visiting Jewish soccer fans.

Rabbi Arieh and Dvorah Lea Raichman, shluchim in the very heart of the Amazon jungle since 2009, are used to tackling a challenge. The couple lives with their four young children in Manaus, Brazil, to provide for the needs of 1000 Jews who live there. The city, largely isolated from the rest of the country, is accessible only by boat or plane.

With Manaus so isolated, kosher food is either brought up the Amazon River by boat from Belem, which takes a week in a refrigerated container, or is sent by air from São Paulo. Typically, says Raichman, he makes a kosher order every two weeks for himself and the nine other local families who keep kosher.

In anticipation of the deluge of guests who visited the river city for the four soccer matches that were held at the new Arena da Amazonia, Raichman placed an extra-large order of kosher food and even hired a full-time chef at the Chabad House to help prepare meals.

The Raichmans, who helped fans find accommodations, took several into their own home when some Sabbath observers could not find lodging close enough that would allow them to walk over for Shabbat services. Guests, said Rabbi Raichman, “expressed tremendous gratitude for the meals and services and the hospitality for which, they said, Chabad is famous.”

In Brasilia, Brazil’s capital city, which counts a paltry Jewish population of 250 people, Rabbi Leib and Sara Rojtenberg, local Shluchim there since 2011, took advantage of the rare influx of Jews and went right to them, stationing a Mitzvah booth right outside the National Mane Garrincha Stadium. Rojtenberg wrapped Tefillin with Jewish passersby and offered educational literature on the Seven Noahide Laws to curious non-Jewish onlookers.

Together with their Chabad colleagues across Brazil, Raichman and Rotjenberg did their best so that no matter what team they were rooting for, Jewish fans scored in some way as they discovered that Jewish life exists, even thrives, deep in the Amazon jungle, taking home feelings of Jewish pride and belonging fostered Chabad of Brazil.