After 80 Years Jewish Community of Stavropol Gets New Torah 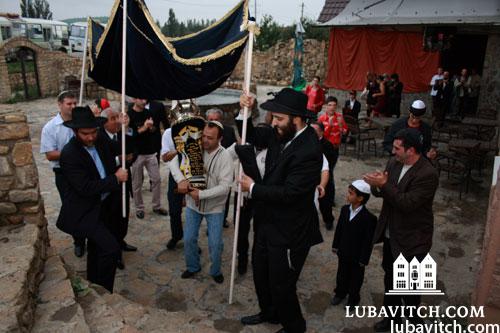 After 80 years, Stavropol gets a new Torah.

(lubavitch.com) The Jewish community of Stavropol welcomed its first Torah in almost 80 years. High on Rabbi and Mrs. Tzvi Hershcovich’s to-do list, upon arriving here last November, was to establish a synagogue and acquire a Torah. They have achieved both goals.

The Hershcoviches are Chabad representatives in this southwestern Russian city, serving the area’s 5,000 Jews. The community’s new scroll was sponsored by two Moscow businessmen, who flew in for Sunday’s event. After filling in the final letters, 300 guests danced the Torah to its new home in an ornate ark constructed for the Stavropol synagogue. Those gathered dined on a gourmet kosher meal prepared in a neighborhood restaurant Hershcovich koshered. This was the first kosher meal to be mass-produced here in decades.

The synagogue will be full again next week, for Rosh Hashanah and weekly prayers. Soon after the holidays, several dozen young adults will join STARS, an educational initiative run by Chabad of the former Soviet Union. A kindergarten is also being planned.