A Veteran Torah for Veteran Soldiers 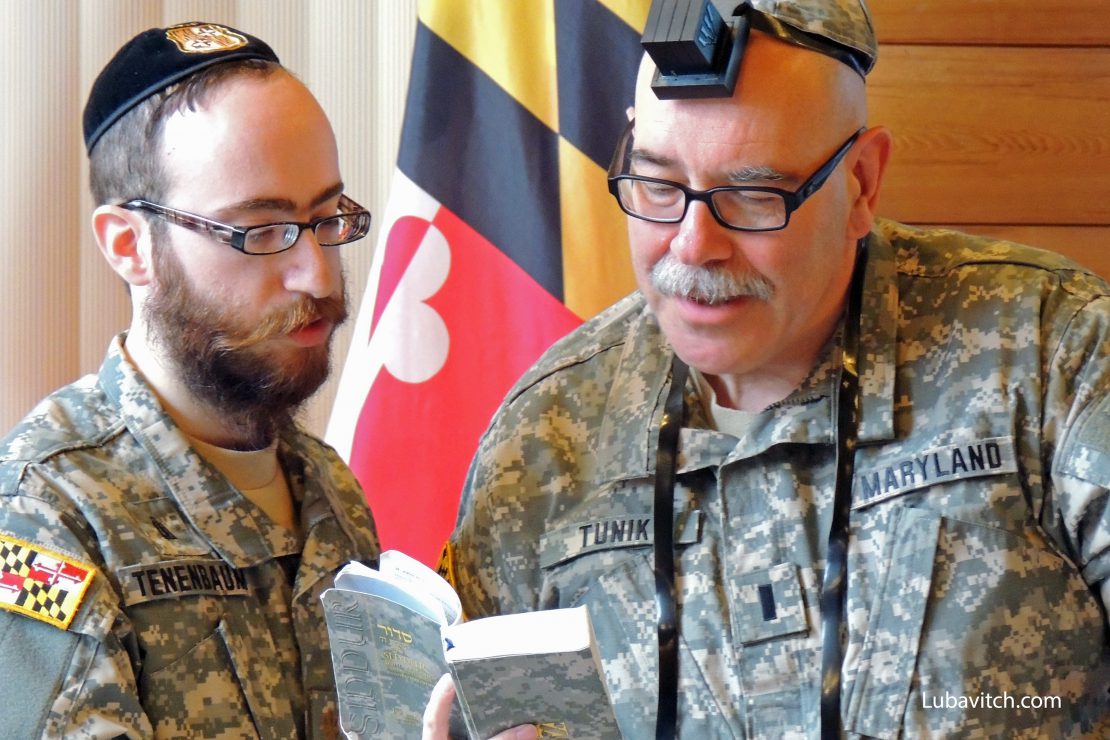 What was once an unused, invalid Torah scroll, dedicated to army veterans, is now fully-restored and being used at a Chabad center serving Jewish uniformed officers. Rather than sitting in disuse, an inspired rabbi from Flatbush found the perfect new home for this Torah just down the road.

A Torah Is Purchased

When Baltimore’s 100-year-old Winands Road Synagogue merged with the city’s largest Modern-Orthodox synagogue earlier this year, longtime member Michael Steininger wondered what would happen to the congregation’s five Torahs—two of which were no longer fit for use. “The synagogue we merged with has fifteen to twenty Torahs,” Michael explains, “and I didn’t want the ones we had to just lie there.”

Steininger and his wife Stephanie purchased one of the scrolls, but when they tried finding a scribe to restore it, the costs were prohibitive. Then they discovered Rabbi Bentzion Chanowitz and his Beis Yisroel Torah Gemach, a project of Merkos Suite 302, which loans Torah scrolls to synagogues that don’t have their own.

A resident of Flatbush, Rabbi Bentzion Chanowitz, opened the Torah Gemach in 2001 after inheriting a Torah from his father. “Here in Flatbush, there’s a synagogue on every corner and each one has multiple Torahs—some of which are hardly used because of the sheer amount in each shul.” Many families commission the writing of a Torah scroll in honor or memory of a loved one. While a commendable gesture, it can result in an excess of Torahs.

In direct contrast, many Chabad centers around the world do not even have one Torah scroll of their own. Requiring about a year of skilled labor, writing a Torah can cost upwards of $50,000, depending on the style and quality. Many small communities can’t afford such an expense in their tight budgets.

Enter the Torah Gemach. This organization welcomes donations of new Torahs or restores older ones and matches them with centers in need until they can commission their own permanent one. Currently, the Torah Gemach arranged 210 loans with a bank of 156 scrolls and counting. In fact, the newest donation to the program was a Torah dedicated to the victims of the Pittsburgh massacre, and its cover features each of their names. “I realized I can do something to support the special work of the shluchim from the comfort of my community,” says Chanowitz.

Steininger turned to the Gemach and Rabbi Chanowitz to help him find a cost-efficient way to restore the Torah. In return, Steininger donated it to the program.

“I wanted this Torah to be dedicated in loving memory of my parents, brother and father-in-law,” Steininger says. His brother, Martin, was an army veteran and a Maryland army reservist before passing away, stateside, at the age of thirty-eight. His father-in-law, Albert Hirsch, fought in Italy in WWII. Steininger’s father, Joseph, was a Holocaust survivor and his mother, Harriet, was from the Baltimore area. Steininger recalls attending services at the Winands Road Synagogue with his parents for thirty years.

In light of the strong military background in the Torah’s dedication, Chanowitz looked for an appropriate recipient.

Right before the High Holidays, Rabbi Chanowitz received a call from Rabbi Chesky Tenenbaum, a law enforcement chaplain, who directs the Jewish Uniformed Service Association (JUSA) with his wife, Chani. An affiliate of Chabad of Maryland, JUSA serves current and retired Jewish officers including those in the military, police, and fire departments. Tenenbaum was looking to conduct High Holiday services for the first time and was in need of a Torah on loan.

“I’ve got the perfect Torah for you!” Chanowitz exclaimed.

This past High Holidays, the Steiningers’ Torah took center stage after years of disuse.

“It’s beautiful that the Torah has found such an appropriate home—and in the same city no less!” Steininger reflected. While he doesn’t consider himself Chabad, he joined a service at JUSA to see his donation in action and was honored with an aliyah from this Torah.

Though JUSA doesn’t yet hold services every week, the last time the Torah was used was this past Shabbat, November 10, Veterans Day weekend. “A Torah dedicated to veterans, read for veterans, on Veterans Day weekend was so meaningful,” Tenenbaum says. He hosted Friday night and Shabbat morning services complete with a kiddush dinner and lunch for current and former military and law enforcement officers.

Tenenbaum is grateful to Steininger for his donation and Chanowitz for his effort in facilitating it. “It’s such a meaningful gift to our organization.”

For more information and to support the Beis Yisroel Torah Gemach and JUSA, visit www.BYTG.org and www.JewishUSAMD.org.