A Time To Reap

A Thai Farmer Uncovers His Roots 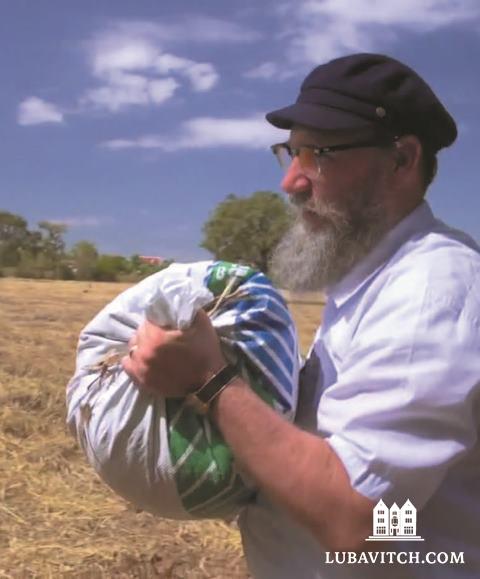 It’s hot in the rice fields of Sakon Nakhon. At 104 degrees, planting season is in full swing. Up since 4:30, the farmer carefully sows seeds across 34 acres of wetland. Though combines and tractors have replaced water buffalo, the going is still slow and largely manual. The goal? Fifteen tons of bagged Jasmine rice that will fill his barn come harvest-time.

Zevulun Brewer, an American sporting a beard and yarmulke, is hardly your typical Thai farmer.

“I was raised in a family that was very secular,” shares the 58-year-old who hails from Kansas. “My father was indifferent, and my mother, who lost a lot of her family in 1941 in Lithuania, was hostile. She didn’t want her children to be Jewish; she was scared for their lives.”

Brewer joined the Navy post-high school, where he worked for more than two decades as a fire controlman. Upon enlistment, he completed the necessary paperwork, filling in his hair color and height. But when he came to religion, he paused. “I was gonna put down ‘none.’ I didn’t even think about it. But then I couldn’t do it somehow, and I checked off ‘Jewish.’ It was the only Jewish thing I ever did.”

It was a decision that would subtly redirect his life forever.

“So we’re on board ship with a lot of hours to spare and nowhere to go. They announced a movie on the mess deck, The Ten Commandments with Charles Heston and everyone went to watch.” During the film, his fellow sailors turned to him for confirmation of the plot line. “They were looking at me to tell them if the story was true, and I realized how ignorant I was. I had no idea.”

When they pulled into port a few days later, Zevulun marched off the ship in search of a Torah. He found one, an English edition.

While in the Navy, he married a local woman, and settled in Sakon Nakhon, a northeastern province of Thailand. The couple had three children and together began tilling the rice fields. Twenty years later, life, he thought, had turned out pretty well for him. “I built a house, pieced together a farm, have a full rice barn and a trailer, combine, car, and truck. My kids are growing up and they’re not in trouble. I’m living the dream.

“But I’m not satisfied.”

It was December of 2008 and Zevulun spent a lot of time in quiet contemplation. “I thought I was going crazy. I had spent my entire life trying to attain things, I thought I ought to be satisfied. I couldn’t figure out what was wrong.”

He decided to ask a rabbi for help. But, he figured, there weren’t any in Thailand. A look in the local paper’s religion section confirmed his beliefs. When he met a man from Boston who knew of a “temple in Bangkok,” he traveled there and followed his directions. “There was no synagogue. I figured the guy didn’t know what he was talking about, so I came back home. I was about ready to give up but then I did a Google search.”

Searching on Google required a 30-kilometer trek to the closest internet cafe where he typed in “Jewish Thailand.” And there it was: JewishThailand.com, a bustling Jewish online presence reflecting several Chabad centers around the country. Brewer messaged the rabbi, Yosef Kantor, and the two began an email exchange. Finally arriving at the Chabad synagogue (the original directions were slightly off) it was, he admits, the “first time I really felt at home in my life. I just felt so valued.”

Rabbi Kantor got Brewer’s address in Sakon Nhakon and a few months later, a package arrived at the farm. “We sat around the table, my wife and kids and I, looking at Hebrew letters I had never seen before. I didn’t know much, but I’d seen the movie, and I realized it was matzah for Pesach. We started discussing the story of the exodus, when my kids mentioned that Aaron was the brother of Moses. ‘How do you know that?’ I asked. They told me they had seen it on a cartoon.

“And that just triggered this remembrance for me, that way back in the Navy, my only knowledge of anything was from the movie. And now my kids’ knowledge comes from a cartoon. How ludicrous is that?”

Brewer raced to his library where he unearthed the dusty copy of his Bible. Then and there, he read the entire portion of “Exodus” out loud to his family.

He hasn’t stopped learning since. Eventually he got a computer (with a personalized fiber optic cable to his farm) and began downloading whatever classes he could find on Chabad.org. He studies regularly with several JNET (Chabad’s Jewish Learning Network) partners via Skype, and has a regular Wednesday night session with Rabbi Kantor.

But his most meaningful session is with his son, Benjamin.

“I was always able to relate well to my two daughters, but I really felt I had no way to relate to my son,” Brewer says. “I would try. We tried fishing and playing catch, but nothing really worked. Then we started this Torah together, and it’s been such a great experience. We are finding out the meaning of life together.”

The younger Brewer was so inspired, he decided to convert to Judaism. After an intense five-year process, including a year working for and learning with Rabbi Kantor, Benjamin was converted by the Beth Din of Sydney, Australia, earlier this year. He is  now enrolled in a yeshiva in Safed, Israel, where he plans to continue learning for several more years.These days, father and son study each Monday evening via Skype.

“It’s the cycle of life,” reflects the elder Brewer. “You’re completely consumed with work and raising children, and by the time you have a moment of repose, you’re exhausted. Raise a family, for what? Economic independence, for what?

“If it wasn’t for the Rebbe and his shluchim, I would be lost. I always knew there was a greater purpose, I just didn’t know what it was.”

For now, Zevulun Brewer plans to stay in rural Thailand. Awake before sunrise, he does some chores before morning prayers wrapped in tefillin. He spends one Shabbat a month in Bangkok, returning with a suitcase of kosher chicken and meat. He grows his rice, earbuds in place, as he listens to a Chasidic class or Talmudic discussion. And when a Jew chances upon his path, even in a wide swath of hundreds of kilometers of farmland, he tries to share a good word and good deed.