A Thankful Reunion After 64 Years 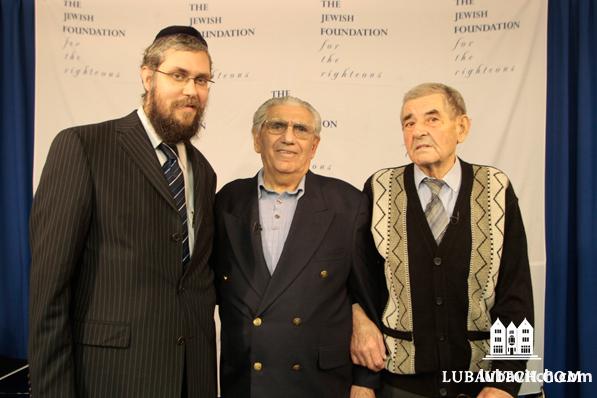 Mr. Bonder at center flanked at left by Rabbi Eliezer Zaklikovsky and Bronislaw Firuta on his right.

(lubavitch.com) Though the arrivals hall at JFK is no stranger to emotional reunions, a unique meeting on Wednesday brought more than the usual bevy of reporters and onlookers.
Bronislaw Firuta arrived from Poland on one of the busiest travel days of the year. There to greet him was Joseph Bonder. Though the two men, now in their 80s, hadn’t seen each other in 64 years, it was recognition at first sight.
Bonder was only 13 when he and his sister Joan were hidden by Firuta in Ostra Mogila, Poland. It was 1942, the height of Nazi imperialism. The siblings spent the next two years shuffling between the attic above and the shack behind the Firuta home.
“We never stayed in the house,” Bonder recalls. “The attic and the shack were open; they could make the excuse that we came in on our own. It was a big risk they were taking.”
That heroism was recognized by the Jewish Foundation for the Righteous, a New York-based organization dedicated to supporting and preserving the legacy of gentiles who risked their lives to save Jewish people during the Holocaust. The Foundation sponsored this reunion trip.
Though they have maintained a relationship via written correspondence and telephone conversations, the pair hasn’t seen each other in over six decades. It is “more exciting than anything else,” said Bonder late Wednesday. “He was really righteous and generous. He was always on my mind.”
Together with Bonder were his wife, children, and grandchildren. His rabbi from Monroe Township, New Jersey, was also at the emotional reunion.
“How can I not be a part of such a big celebration in his life?” Rabbi Eliezer Zaklikovsky, director of the Chabad Jewish Center of Monroe, told lubavitch.com. The meeting, he said, proves that even in the darkest of times, there were reasons to be thankful.
“This is someone who is not Jewish, who risked his life to save Jewish people. He is one of the truly righteous gentiles. It was very emotional to see.”
Bonder is an active member of his local Jewish community and vice-president of the Monroe Holocaust Survivors Group. Because of Firuta, Bonder “was able to produce a family of children and grandchildren,” said the group’s president, Jack Chevlin in an interview with lubavitch.com. “I wish we had many more people like that who could have done so for other Jewish people.” Chevlin himself was rescued by gentiles during the Holocaust.
Firuta’s U.S. visit comes in the wake of his wife’s recent death and the destruction of his home shortly after. For his part, Bonder plans to assist Firuta in any way he can. “Helping Jews then, what he did for me, was very risky. Financial help has no risk, so I have to. I’m sure I will do something for him.”
The two have a lot of catching up to do. During his whirlwind six-day trip, Firuta will stay at the Bonder home. A two-day New York City tour is planned.
On the agenda is visits with Bonder’s children, who have heard stories of their father’s rescue. He hopes that in the future, they too will keep in touch with his Polish savior. “They know he saved my life. They know well.”