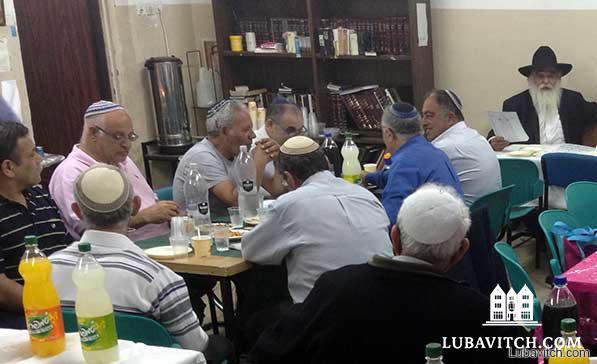 “My eyes met with the eyes of the terrorist. I saw murder and hatred in them. Then he emptied his gun—12 rounds struck me. The tables and holy books were overturned. Anyone who was in sight was hit,” recalls Yosef Edri, one of the 150 survivors of a terrorist attack in Kfar Chabad, Israel, when the state was still a fledgling enterprise.

Earlier this month, nearly 60 years later, 40 remaining survivors attended the reunion. They met in that same synagogue where in April 1956 the terrorists burst into the Chabad vocational school murdering five students and their teacher.

The survivors, now elderly, lit memorial candles and studied the traditional Mishnah in memory of those who were so brutally cut down. They recalled and reflected, sharing the pain of that horror. Mostly, they took comfort in the fact that the synagogue continues to be used daily, to this day, a testament to their refusal to cave in and give up.

It was only seven years after Kfar Chabad, then an agricultural village not far from Tel Aviv, was established by Russian Jews who survived Stalin and escaped communism. The attack was yet another version of the pogrom they had hoped was forever behind them, and came as a crushing loss for the small community. The community was stunned.

Understandably, many of the residents raised the idea of abandoning the village and moving to more populated locations, further away from border with Egypt. They consulted with the Lubavitcher Rebbe, Rabbi Menachem Mendel Schneerson.

After the shiva, the seven days of mourning, the Rebbe respond in a telegram addressed to the entire community. The Rebbe joined them in their sorrow and in their prayers, and blessed them to “overcome every obstacle, and strengthen all of your personal and communal endeavors.”

In a letter to the village’s rabbi, the Rebbe laid out his basic philosophy when facing tragedy: “Healing comes about through positive actions; in this case, the priority is to develop the village even more than before.”

Thirty days after the murder, thousands—among them those who were injured in the attack—turned out to lay the foundation for Yad Hachamishah, “The Hand of Five,” a home for a printing press to be used by the students of the vocational school. The building became the center of a sprawling campus where thousands would get their educational and vocational training.

Edri miraculously survived his gunshots, and he too, attended the groundbreaking event. At the reunion this year many recalled his participation at the event, and were awed to see him alive and well today.

“He was the one who arrived to the groundbreaking with a cast from his toes to his chin,” Binyomin Cohen, another survivor recalls. “It is unbelievable to see him alive and well.”

Most of the students completed their studies at the school and then moved on. From time to time, they’d read about activities in Kfar Chabad from occasional news reports. The reunion, which brought many of them back for the first time in decades, was, they offered, “therapeutic.”

Seeing Kfar Chabad as it is today—a vibrant, thriving community—was inspiring. “The children roaming the streets without fear throws a wrench into the mission of the terrorists and what they wanted to accomplish by murdering they young students,” says Cohen.

Related Articles
View All
Kfar Chabad: It Takes A Village . . .
{}
Chabad to Terror Survivors: We Won’t Forget You
More than a thousand families of terror victims in Israel will be receiving a pre-Rosh Hashanah visit this week, courtesy of Chabad in Israel’s Terror…
Taking a Global Approach to Helping Israel’s Littlest Victims
If it takes a village to raise a child, what does it take when a child is injured, maimed or G-d forbid killed, in an…
Milan’s Mayor Visits With Israel’s Survivors of Terror
Israel’s victims of terror have slipped from the headlines, but they were very much on the mind of Milan’s Mayor Gabriele Albertini when he met…
In the Aftermath of Terror: Chabad Reaches Out
When terror strikes in an Israeli city, throwing untold numbers of lives into painful chaos, it’s often hard to know precisely in which ways to…
Get Inspiration to your inbox!
Newsletter
Join our weekly newsletter for inspiration and updates
Donate
Find Your Local Chabad Center
Chabad
About Chabad-Lubavitch
About Chabad Lubavitch
The Rebbe
Headquarters
Magazine
Magazine
News
News & Updates
In The Media
Impact
Social and Humanitarian
Social and Humanitarian
Education
Education
Community
Community