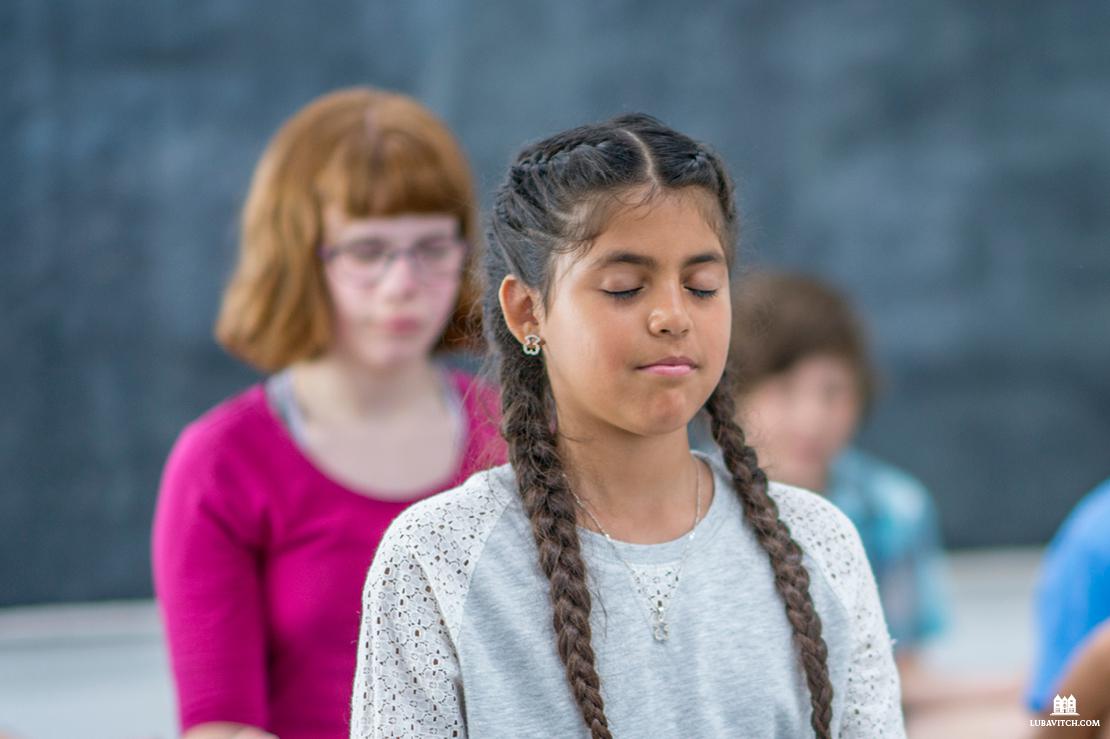 It is a typical, bustling morning at a middle school in Camarillo, California, and the students are about to take an algebra quiz. But first, the desks are arranged in a circle. The teacher directs their students to take out and read the notes that their parents have given them. We see these students unfold well-worn slips of paper containing affirming messages written in bold scrawls: I love you, I believe in you, Try hard and don’t give up. The children read their notes, shut their eyes, and spend a minute in silence, reflecting on the notes that they have just read. The room is quiet, the atmosphere intense. After sixty seconds, the children open their eyes and get ready to begin the quiz.

Classroom practices like this might seem strange by today’s standards, but, during the first two centuries of American schooling, invocation rituals were commonplace. They just looked a little different back then. Instead of reading notes from parents, students would read passages from the King James Bible. And instead of sitting apart in silence, students were required to join together in prayer.

Starting around the 1860s, these school prayers became a flashpoint for a hundred-year-long conflict in communities across the country. Catholic parents worried about the influence that the protestant King James Bible would have on their children. Jews and children from other non-Protestant households faced fierce bullying when they abstained from prayers. Many students participated in school prayers not because they identified with the rituals, but because they didn’t see another option.

Then, in 1962, a Jewish father named Steven Engel put his foot down when he saw his son praying with a bent head and clasped hands. “That’s not the way we say prayers,” he told his son. Engels and four other parents sued the school district in a case that went on to make Supreme Court history. In a six-to-one vote, the court ruled that the school district had violated the Constitution’s First Amendment, which prohibits the US government from legislating religious practice. The Engel case became the first in a decade-long series, through which the Supreme Court established a definitive prohibition against public-school prayer.

But even while the Jewish community was fighting against school prayer, the Lubavitcher Rebbe, Rabbi Menachem M. Schneerson, of righteous memory, warned that neglecting to encourage the moral development of children was itself worrisome. While as Jews, we are particularly sensitive to the pitfalls of state-sponsored religion, the Rebbe argued that we must also be sensitive to how easy it is for a society to break down when it has no ethical compass, and no mechanism for encouraging the personal exploration of values.

The Rebbe felt that the proper education of youth to be law-abiding, moral citizens could not happen just by instilling fear of police or of the criminal justice system. True morality could not emerge from a purely utilitarian calculation, but rather, would emerge by inculcating faith in G-d—in the idea that there is “an Eye that sees and an Ear that hears.”

And so the Rebbe became a passionate advocate for the emerging movement to replace school prayer with “moments of silence”—short periods set aside for quiet contemplation, reflection, meditation, or—if individual students prefer—prayer.

When numerous public schools went on to adopt this practice, they were met with resistance. Many Jews and other non-protestant parents were understandably wary. They feared that these moments of silence would become school prayer by another name.

And so the Supreme Court stepped in again. In 1985, the court ruled that schools and teachers violated the First Amendment when they recommended that students pray during moments of silence.

But, as later laws and court rulings would demonstrate, moment-of-silence rituals are perfectly constitutional when they don’t promote prayer. Many of these rituals are designed to provide a variety of other benefits.

Which brings us back to Camarillo, California.

A Wealth of Benefits

Those children, who just spent sixty seconds in silence before beginning their algebra test, are participants in an initiative called “A Quiet Moment.” This initiative was launched as part of a larger effort called “Saving Lives Camarillo,” which seeks to reduce adolescent drug use across the region.

Rabbi Yaakov Cahnman, who is the community director of Saving Lives, says that it is easier to prevent drug abuse than to cure it. Which is why Saving Lives has numerous initiatives to educate families about the dangers of drugs and to provide concrete steps to prevent drug abuse. Cahnman sees A Quiet Moment as one important prong of their efforts, teaching children self-awareness and self-regulation within a warm setting, where they experience connection, caring, and purpose. “The best way to keep kids from using drugs is to care for their mental and emotional well-being,” he says.

And moments of silence don’t only help prevent drug abuse. They can also help prevent a much broader range of concerning behaviors. School Psychologist Izzy Kalman, who has lectured widely about children’s social interactions and bullying, finds great potential power in encouraging a moment of silence in the classroom. Anyone who has ever participated in a moment of silence—perhaps as part of a memorial event—will remember how time slows down, requiring discipline and self-restraint in order to remain still for the duration of that moment.

Moments of silence also have meditative aspects that can encourage calm and reflection. Rabbi Kivi Greenbaum, chaplain and professor of Jewish Studies at The College of New Jersey, starts all of his classes with a quiet moment. He has students turn off their phones and computers, taking a minute at the start of each class to “detach and detox.” His goal is to help students alleviate their own stress and anxiety, and find focus before beginning to learn. The response, he says, has been phenomenal. On the rare occasions when he forgets to make time for a quiet moment, his students are always sure to remind him.

One of Rabbi Greenbaum’s former students became a schoolteacher and decided to incorporate quiet moments into her special-education classroom as well. As children enter her class each morning, they are free to engage in an activity of their choice. She then transitions students to the start of the formal school day by asking them to sit quietly for sixty seconds, using the time however they please.

“Many of my students come from homes without equal access to food and resources. Their home situations may lack structure,” she says. “I tell them that they can use the minute however they want, so long as they are silent. They don’t have to do anything—but they should respect that this quiet time is something that may help a friend. I find that after the quiet moment, they are more calm, less stressed, more ready to engage with themselves—more ready to learn.”

And according to Izzy Kalman, classroom quiet moments continue benefiting children long after the school day has ended. “The real game-changer,” he says, “is the emphasis on children discussing with their parents what to think about during those moments at the beginning of the day.”

In an age when many parents are overburdened, and their roles in their children’s education is increasingly marginalized, Kalman sees these conversations as opportunities to put the family front and center in the life of the child. Discussions about quiet moments become occasions for parents to affirm the importance of school, and, at the same time, act as guiding influences and moral role models within their own families.

Whereas school prayer inspired more than a century of conflict, quiet moments have become a unifying force among parents from all walks of life—religious or otherwise. Because all parents want to see their children become healthier, happier, and more contemplative.

Currently, twelve states mandate a daily moment of silence at the start of the school day; more than twenty others permit it at the discretion of the individual principal or school board. And the Lubavitch community is working hard to get those numbers up.

Rabbi Abraham and Shira Frank have devoted countless hours talking to school principals and administrators, encouraging them to take advantage of the benefits that accrue to children and schools that adopt quiet moment rituals.

Their website, MomentOfSilence.info, includes testimonials from students who talk about the benefits of taking a minute at the beginning of the day for quieting down, putting aside tension, and finding their inner strength. “It helps me relax, and not have so much anger in myself when I start my day,” says one girl. “Sometimes I use a moment of silence at home to calm myself down,” says another.

“It’s all about relationships,” says Rabbi Frank, in describing his approach to successful advocacy. “Some principals are resistant to the idea. If they are, I accept that and move on. But others are really interested in exploring a practice that can reduce stress, help kids focus, and build a sense of classroom community.”

Like Rabbi Frank, Rabbi Cahnman stresses the importance of building relationships with the school leadership and making the program easy to implement. He recommends that rabbis and lay people who are interested in developing similar programs in their own communities should consider the ways that red tape can get in the way of institutional change.

“You need to make it easy for all stakeholders to buy into the program,” he says. “Provide a clear outline of the program, give them a packet to share with the board, draft a letter for the parents explaining the program and telling them how to participate.”

He also recommends introducing the school community to local psychologists and therapists who can help explain how this initiative supports the mental health and wellness of students.

With so much work left to do within the Jewish community, initiatives like the Quiet Moment sometimes seem like they are of low priority. After all, the legality of the program depends on its religious neutrality, creating space for students and parents to find their own meaning. But the mission of the Jewish people is not only to look out for its own interests.
The executive director of Chabad of Camarillo, Rabbi Aryeh Lang, who hired Rabbi Cahnman as the community director for the Saving Lives and Quiet Moment initiatives, puts it this way: “Chabad is not just here for the Jewish kids. We have a responsibility to the whole community—to ensure a better future for all children and for all of society.”