A Promise for Jewish Grandchildren at March of the Living 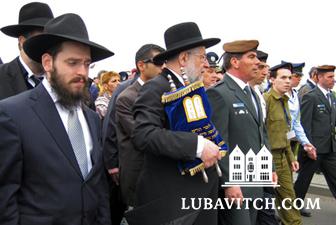 (lubavitch.com) An estimated 8,000 people participated Thursday in the 20th annual March of the Living from Auschwitz to Birkenau on Holocaust Memorial Day.
Among those leading the March were Israel’s former Chief Rabbi Meir Lau, himself a Holocaust survivor, Israeli Defense Forces Chief of Staff Gabi Ashkenazi, and a delegation of Chabad-Lubavitch representatives who joined Krakow’s Chabad Rabbi Eliezer Gurary.
Most of the marchers were Jewish teenagers who were greeted by rabbinical students from Chabad’s rabbinical yeshivas in Krakow and Warsaw under the leadership of Rabbi Sholom B. Stambler, with the opportunity to do a mitzvah in memory of the Jews of the Shoah. Hundreds welcomed the offer to wrap tefillin.
Among the marchers this year was a New Jersey woman who approached the rabbinical students eager to talk. Two years ago, she said, her son participated in the March of the Living, and agreed to wrap tefillin when approached by the Chabad students.
At the time, the woman explained, her son was dating a gentile girl. But her pleas, that he leave her and commit to marrying Jewish seemed to fall on deaf ears.
“After he put on the tefillin,” the woman told the rabbis, “my son told me: ‘I promise you Mom, you’ll have Jewish grandchildren.’”