A Primer on Intermarriage for Europe’s Jewish Students 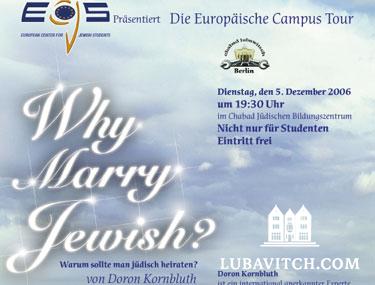 “Why Marry Jewish?” author Doron Kornbluth had better like planes. And crowds. Over a jam-packed, 14-day tour, the popular writer, lecturer and thinker will be touching down in 12 European cities. The European Center for Jewish Students (ECJS), the whirlwind speak-a-rama’s organizer, has drawn more than 14,000 Jewish students and young adults to its events over the past 24 months. ECJS student leaders – from Austria to Malta to Turkey to the UK – are messaging the organization’s 26,500 Jewish-student strong database to turn out the numbers for the upcoming experience beginning November 23 in Helsinki.

Chances are they won’t need much convincing to show up. In liberal Europe the idea that Jews should marry Jews rings racist to some ears. When many of today’s Jewish students are the products of mixed faith unions, the concept of enshrining Jew-to-Jew marriages as a priority is sure to stir the pot. “It is a touchy subject, but if we want it to have a next generation of Jews in Europe, you have to talk about it,” said ECJS Executive Direction Rabbi Yossi Waks who lives in Brussels.

Kornbluth may be just the man to broach the topic. His approach to the subject has been hailed by a diverse group of Jewish community leaders. "Doron’s talks are engaging and non-threatening: I have seen how he relates to students and I only wish we could have hundreds more like him out there,” wrote Ammi Dorevitch, Executive Director of Hillels Around Chicago. Dr. Joan Lachkar, an affiliate member, supervisor and teacher at the Southern California Psychoanalytic Institute was equally enthusiastic. “As a psychologist, published author and specialist in the field of relationships of marital therapy, I can attest that every point he elaborated on made perfect sense – and he did it with humor and wit!"

Gloom and doom statistics land the intermarriage rate in some parts of Europe as high as 80%. But Waks sees the flip side: Europe’s increasingly vocal Muslim population and growing overt anti-Semitism are driving greater Jewish solidarity. Waks points to the 500 students from 24 European countries paying their own way to travel to ECJS’s Shabbat retreat in Amsterdam this weekend as proof. Eyal Benisty, an ECJS participant and student organizer living in Antwerp, joined the group to stay in touch with Jewish peers. After attending a Jewish school in his younger years, “you go to university and you miss being part of the community. That is where the ECJS helps.”

Benisty met his girlfriend Esther at ECJS’s birthright reunion. Flying off to Israel just days after war broke out last summer, ECJS still managed to bring 200 students from 20 countries to Israel for the trip, a number Waks claims is the largest European Birthright Israel group ever.

In the three years since its establishment, ECJS has hosted an impressive line up of speakers. Mega-lawyer Alan Dershowitz; refusenik turned pol Natan Scharansky; Israel’s Ashkenazi Chief Rabbi Yona Metzger; and Munich Olympics survivor Dan Alon have all drawn large crowds with the help of its community partners. Liaising with established Jewish community groups has built ECJS’s reputation as valued asset. ECJS has partnered with the Jewish Agency for Israel, Lauder Business School, Chabad Houses, MASA, Europena Council of Jewish Communities and Maayanot, as well as Jewish community organizations and student unions in Oslo, Budapest, Rome and beyond.

When ECJS brought its group to Mayanot Israel in 2006, Dublin Institute of Technology student Lindsay Kutner came – albeit reluctantly. Kutner admits she signed up for ECJS’s birthright trip through Chabad of Ireland’s Rabbi Zalman S. Lent only because her mother pleaded with her. “Before the trip, basically I was embarrassed to say I was Jewish,” said Kutner. “My whole perception of the religion is completely changed. I probably won’t be the most religious person, but I learned the values of Judaism.”