A Once Derided Jewish Ritual Now In High Vogue 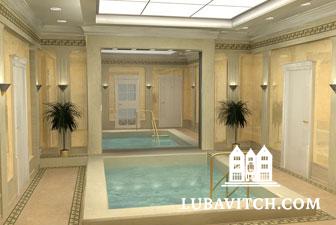 (lubavitch.com/LNS) Back in the 1970s, women’s mikvah was something you might have heard about in hushed whispers, and then only among observant women. A private matter cloaked in discretion, if your mother didn’t teach you about it, chances are, you didn’t know anything about it. At best, you might have had some vague notions about some obsolete tradition that harked back to menstrual taboos and had more to do with personal hygiene than with anything spiritual.

Bronya Shaffer, a Chabad lecturer on women’s issues, spirituality and relationships, remembers when she was invited to a Jewish women’s group in the early 1970s. It was on the Upper West Side of Manhattan. In the course of conversation, she mentioned the word mikvah.

“It was as if I had uttered a dirty word,” she says, recalling the response.

Two or three years later, Shaffer went to that same women’s group, where mikvah came up again. “There was a lot of hostility and anger towards the whole concept of women using mikvah, but at least,” she says, “they were talking.”

Then, sometime in the 1980s, Mrs. Shaffer received an invite to the same group, only with a radically changed attitude. The event was billed: “The Ultimate Feminist Experience: Mikvah.”

The remarkable shift would continue to gain momentum, making mikvah one of the more popular observances among Jewish women today. Not only religious women. In Melbourne, Australia, there’s a mikvah that caters specifically to secular Jewish women. In recent years, art exhibits touring prestigious museums in the U.S. have explored the theme of the mikvah water’s spiritual healing power. Books on the subject abound, and in a culture of women’s spirituality, the mikvah itself has surfaced from a dank pit in the concrete, to an elaborately illuminated ritual claimed by Jewish women across the board.

According to historian Rabbi Joshua Hoffman, German and Eastern European immigrants initially built and used mikvahs in the nineteenth and early 20th centuries in the U.S. But by the 1920s, the next generation for the most part neglected the tradition, and mikvahs fell into disuse. With no formal Jewish education, girls did not know the basic laws of mikvah and marriage, and had no appreciation of their importance to Jewish life. Mikvahs were perceived as grimy (many were) and frightfully old-fashioned. By the 1960s there were fewer than 200 mikvahs in operation in the U.S. and probably less than that number in the rest of the world.

Today, women around the globe can dip in 1600 mikvahs, with 400 in North America alone. Mikvahs anywhere from Zimbabwe to New York can be located on Mikvah.org, a global mikvah directory and website that offers all relevant information and resources related to mikvah, which is regularly perused by half a million visitors.

At any given time, there are numerous mikvahs under construction/renovation in Chabad communities. In Dnepropetrovsk, Ukraine, where Chabad is building a third mikvah—one that’ll “be the most beautiful in the world,” promises Chabad representative Mrs. Chana Kaminetzki, the local women—many who are not observant, “think that if you don't use mikvah, you're not with it.”

The women, she says, appreciate mikvah use as integral to a wholesome marriage and and thoughtful family life, and see it as a way to help promote domestic harmony. Mrs. Kaminetzki supplements their enthusiasm with regular classes on the laws involved in mikvah, marriage and sexuality for brides and married women.

To call it a paradigm shift is an understatement: a tradition once perceived as sexist and denigrating of women is sought out, even and especially by feminists, for the liberating and validating rewards that seem to come with its observance.

Sara Wasserman is the attendant at a plush mikvah on Manhattan’s Upper East Side. The four million dollar Jacques and Hanna Schwalbe Mikvah opened by Chabad in July of 2006. Its eight preparation rooms are usually full; the mikvah averages 15-18 women a night. Scented candles, Jacuzzi tubs, and al fresco paintings pamper each woman as she prepares to use the mikvah.. Of the regulars—women come from Connecticut, Queens, the West Side of Manhattan, and Brooklyn to use this mikvah—60 percent are Shabbat observant. Many non-observant women, explains Wasserman, seek out the mikvah as a means of improving their marital harmony or their chances of conception.

In 1978 when Sari Horovitz was getting married, there was no mikvah consciousness amongst her traditional peers. Soon after her wedding Ms. Horovitz discovered the mikvah for herself. After her own “mikvah revelation,” Ms. Horovitz introduced her friends to the idea. This group of young feminists “discovered the potential for a huge spiritual dimension that wasn't there before.”

In 1975, recognizing the milieu established by the women’s rights movement in which women were encouraged to explore what it meant to be a Jewish female, the Lubavitcher Rebbe called on Chabad representatives to make mikvah education an important part of their program.

Mrs. Mindel Feller, director with her husband of Chabad-Lubavitch activities in Minnesota, remembers the challenge: “Women didn’t talk openly about sexuality or spirituality back then,” making it difficult for her—herself a newly married 20-year-old at the time—to even broach the subject, in striking contrast to today, where women, she says, “are eager and open to hear about this.” Back then, even the women who were interested and wanted to use the mikvah, recalls Mrs. Feller, “would do so on condition that no one know about it. They appreciated the concept but felt uneasy with anyone knowing that they were using the mikvah,” unlike the open enthusiasm that mikvah inspires today.

With the increased activity in mikvah construction and mikvah renovations, Chabad Shluchos began taking teenagers on mikvah tours, introducing them to the idea well before they’d be getting married. No longer did the mikvah conjure up old associations of women in eastern Europe cracking a hole in the ice of a frozen lake. A young generation of Americans was exploring mikvah in a completely different ambience, making new associations that resonated with a modern sensibility.

One secular woman in Las Vegas, chancing on a mikvah for the first time, appreciated the beautiful aesthetics and decided on the spot to take this one mitzvah upon herself.
Not surprising, says Bronya Shaffer, who hastens to add that what keeps a woman like that going, is the spiritual experience itself. “Having been touched by the spirituality of the mitzvah, many women want to continue, and will do so even if they may not, at a certain point, have access to a lavish mikvah.”

Rabbi Gershon Grossbaum, an authority on the construction of mikvahs, has seen the demand for new mikvah construction soar. When he began 35 years ago, he would receive two or three calls a year for assistance with building. Today he is juggling almost 40 projects, and the requests keep on coming.

Like Ms. Horovitz, Sue Web was raised with very little knowledge or understanding of Judaism. When Mrs. Web was engaged in 1975, her husband’s mother insisted that a rabbi perform the service. The journey to a rabbi led her to a rebbetzin who quickly introduced her to the concept of mikvah. Despite many obstacles, including a husband who strongly opposed her mikvah use, this non-observant woman cherishes the monthly experience. Mrs. Web credits the spiritual aspects of mikvah with helping her raise two successful daughters.

Her younger daughter, Rosie, is engaged. Like the rebbetzin many years ago, Sue is teaching her daughter about mikvah. The younger Web, who is also secular, is intrigued. Though she is not committed to keep a kosher kitchen or a Shabbat-observant home, Ms. Web and her fiancée are committed to this one mitzvah.

“I like the idea that it brings G-d into the relationship,” she confided, “and I especially relate to the concept of a monthly renewal.”