A Million Mitzvahs . . . And Still Counting 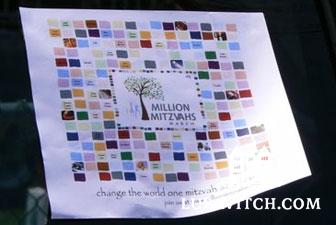 AEPi sorority sisters, students at Hebrew Academy Day School and bar mitzvah guests all took on an extra mitzvah, act of goodness or observance prescribed in the Torah to push the mitzvah counter to one million.

The Million Mitzvahs Campaign, was launched in June 2006 by The Shul, a Chabad center in Surfside, FL, with the idea of making the world a better place and bringing Jewish people together as they worked toward a common goal of 1,000,000 mitzvahs. A worldwide crew of do-gooders registered the mitzvot they chose on the MillionMitzvahs.org site. This week, The Shul announced that the goal has been reached.
Participant Sarah L. Caplin describes herself as friendly by nature, but the Million Mitzvah campaign gave her the guts to broach the subject of Shabbat candles with a neighbor in her beachside apartment. Her neighbor was impressed that her one action would be part of a seven-digit collective. “It’s wondrous you can inspire people with a target, a chance to be part of something this big,” Caplin said.

Caplin was one of many who tucked Million Mitzvah brochures into her purse for mitzvahs on the go. “I encouraged people who were not in shul, were not religious that this was something positive they could do. It was very unifying.”

Support for the campaign flourished in quarters not normally associated with Chabad. Over 100,000 mitzvahs rolled in from students in Rabbi Alexander S. Gross Hebrew Academy in Miami Beach. Parents of RASG students thanked project leader Sholom Moshe Sheridan for bringing talk about extra mitzvahs to their dinner table.

Mitzvah numbers jumped as communities turned the campaign as a positive antidote to tragedy and distress.

“A mitzvah is something you can do to fight the darkness. It has a positive impact across the miles,” said project coordinator Rabbi Mendy Levy.

After Prof. Liviu Librescu was killed in the Virginia Tech massacre, as bombs rained down upon Israel, when a well-known doctor in South Africa fell desperately ill, registration at MillionMitzvahs.org leaped.
Reciting the prayer of thanksgiving upon waking each morning and giving charity topped the list of popular mitzvahs. Others took on mitzvahs as general as adding more joy to their lives and as specific as “refraining from gossip from 1 to 2 p.m. on Monday and Friday.” There’s evidence that people used the campaign as a motivation to take a leap toward mitzvah they had been mulling over like “build my first sukkah” and “start learning Talmud once a week.”

Registering mitzvahs, being responsible for a chunk of the million, was a commitment many took seriously. A participant, identifying herself only as Judith sent a confessional email to the site. She mistakenly signed up to “buy four mezuzahs per day” instead of a one-shot mezuzah spree. To make up the difference, she wrote, “I wash my hands every time I eat bread and I say blessing for whatever food I eat. Maybe it is even more Mitzvahs.”

Official celebration of the Million Mitzvah achievement will take place on Purim at The Shul. “Purim in Mitzvahland” will be the theme of this year’s holiday carnival where participants will be recognized for their achievements.

Mass hurrahs will not end the mitzvah drive. All program materials have been passed along to the Shluchim office, a programming resource for Chabad’s 4,000 representatives. Graphics, do’s and don’ts, and website from the Surfside campaign will be adapted for use by communities around the world.

“Everyone’s looking for a magic silver key to get people more connected to doing mitzvahs,” said Sheridan. “Here it is.”