A Match Made In Iraq 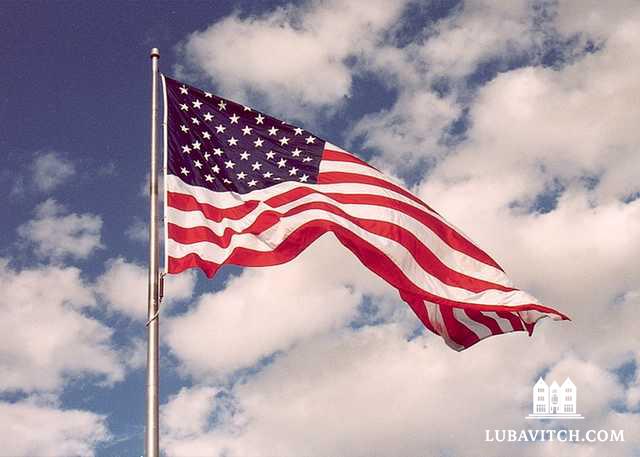 The 15th of Av corresponds this year to Wednesday, August 5th. Of this date on the Jewish calendar, the Mishna says, “There were no holidays so joyous for the Jewish People as the Fifteenth of Av and Yom HaKippurim, for on those days, daughters of Jerusalem would go out dressed in borrowed white dresses.

"And the daughters of Jerusalem would go out and dance in the vineyards located on the outskirts of the city. And everyone who didn't have a wife would go there."

In honor of this day dedicated to women and marriage, lubavitch.com brings its readers the story of Lt. Laurie (Zimmet) Lans.

(lubavitch.com) It is as unlikely a place as any, but for Laurie Zimmet and Moshe Lans, Iraq will always remind them of how much they have in common and what brought them together.

Zimmet enlisted in the United States Navy Reserve in August of 2001, two weeks shy of 9/11. She worked in various military positions and was sent to the Persian Gulf, including Iraq in 2003. After seven months, she returned to the United States, eventually returning for a year of service in Iraq in 2005. Within a few weeks of her and Lans’ arrival, serendipity struck.

“We met during our first month ‘in country,’” Zimmet remembers. “It was a Yom Kippur morning service. Here was this soldier pounding his chest ridiculously hard for the Al Cheit [prayer of contrition].

"I'm not the type that can let something like that pass, so on the first break during the service I walked right up to him and asked, ‘good god man, what did you do so wrong?’ He peered from under his tallis to see what crazy person had approached him…and there you have it, a friendship ensued.”

For three years, the pair remained close friends. Last autumn, though, the relationship “simply took on its own energy, like something was guiding us, it was such a strong force.” The couple got engaged Thanksgiving weekend, the same day that Chabad shluchim Rabbi and Mrs. Holtzberg were slain in Mumbai. They wed in February.

“We've dedicated our marriage and any good we create within it to the merit and memory of Gavriel and Rivki Holtzberg,” Zimmet says.

“It was amazing Divine providence that Laurie met her husband on Yom Kippur day in the Garden of Eden on the Euphrates River,” says Rabbi Moshe Bryski, Chabad representative to Agoura Hills, California.

It was good fortune that Bryski and Zimmet met themselves. In 1997, the rabbi called Dennis Prager’s office to book the popular radio host for a speaking engagement. He reached Zimmet, Prager’s representative at the time. They spoke shop for 20 seconds, a conversation that quickly turned personal and monumental.

“He became my rabbi, my friend, a complete blessing in my life,” recalls Zimmet today. “There are certain people in this world that make this crazy journey tolerable, meaningful; he's been that for me.”

Zimmet fast became good friends with Rabbi and Mrs. Moshe Bryski, the other rabbis and rebbitzens at Chabad of the Conejo, and the community itself.

“I come from an amazing family,” Zimmet says, “but the Bryskis, the other rabbis and rebbitzens, the community, they’re my family, too! I can’t explain it, it just is.” And when she got married this past winter, the whole community turned out to celebrate.

“The wedding was an extremely touching evening for the whole community,” Bryski says. She’s a big part of the community and everyone here considers her a hero. She served two terms in Iraq because she believes strongly in serving her country.”

Being Jewish in Iraq, or any foreign base, is a whole different kettle of chicken soup. But even though it’s far from kosher take-out or a regular prayer schedule, there exists a strong corps of Jewish soldiers serving in the American military.

“Most Jews don't announce it, not every Jew has a name like ‘Goldberg,’ and not every ‘Goldberg’ these days is a Jew; so sometimes it will take months before you realize some of the folks you serve with are Jewish,” says Zimmet.

“We're both very proud to follow in our parents' footsteps,” she continues. Her father and Lans’ mother were in the Navy; Zimmet’s father was a war hero and Lans’ father received a Purple Heart during his Army tour in the Vietnam War.

“The Torah is clear on what is good and what is evil and Moshe and I both believe in President Reagan’s approach of ‘Peace through Strength.’ We also recognize that America is not so powerful because it is so strong; but rather, America is powerful because it's so good! I know it will come across as corny, but Moshe and I both go crazy wearing the uniform, the cloth of our nation that does so much good in this world. And, to have it say right there on our dog-tags – JEWISH – well, we take great pride in that.”

Dedicated to Judaism, she led a Seder in Bahrain in 2003 and during Chanukah of 2005, she temporarily erected a giant menorah in Saddam Hussein’s palace. Zimmet has also tried to assist her fellow Jewish soldiers in their spiritual needs whenever possible. She has been aided by military chaplains, the Jewish Welfare Board, and Aleph.

Since its founding in 1981, the Aleph Institute has sent thousands of care packages to American Jewish soldiers around the world. Holiday provisions, chaplains, and camouflaged Torahs are among their many positive types of ammunition. “The Aleph Institute is outstanding at meeting the religious and spiritual needs of Jewish service members,” affirms Zimmet. “I can't thank them enough.”

Rabbi Menachem Katz directs prison and military outreach for Aleph. He says his organization will be there “in any way for any Jewish soldier stationed anywhere.” Katz estimates that there are 10,000 Jewish Americans currently employed by the military and he tries to help each of them. When Zimmet and Lans were deployed, Katz sent them books and materials. The three developed a close relationship over the years.

“It was so beautiful to see how G-d works in mysterious ways,” comments Katz, “bringing them together because of their devotion to G-d and country.”

And, now, the new Mrs. Lans can also receive assistance from her husband to help her help her fellow Jewish soldiers. Since returning from his tour in Iraq, Moshe has become an Army Chaplain.

Married and back on the East Coast, the patriotic couple continues to serve the United States with pride. Lans works for the Army at FT Belvoir and Zimmet continues her service in the Navy. Though they don’t know where life, or the military, will lead them, they are open to pretty much anything. After all, one never knows where Providence will lead them.