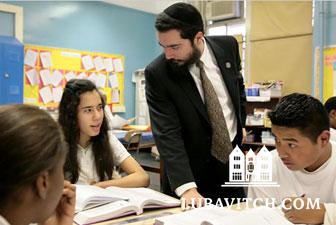 “Junior High School 22, in the South Bronx, had run through six principals in just over two years when Shimon Waronker was named the seventh.”
So begins a front page story in The New York Times, Friday, February 8.
The story, In Bronx School, Culture Shock, Then Revival, by Elissa Gootman, looks at how “a member of the Chabad-Lubavitch sect of Hasidic Judaism with a beard, a black hat and a velvet yarmulke,”  greeted as an incredulous mismatch among the faculty at this school, has succeeded were others could not.
Waronker, 39, with a background in the military and first in the graduating class of The New York City Leadership Academy, welcomed the challenge.
Once on a list of the city’s 12 most dangerous schools, under Waronker's leadership, it has turned into “an entirely different place,” Schools Chancellor Joel I. Klein is quoted as saying in the article.
He's outlasted his predecessors, and "test scores have risen enough to earn J.H.S. 22 an A on its new school report card." Waronker told The New York Times that “he was inspired by a story of how the late Rabbi Menachem Mendel Schneerson, the Lubavitch spiritual leader, met with an Army general, then inquired after his driver.
“That’s leadership,” he said, “when you’re sensitive about the driver.”