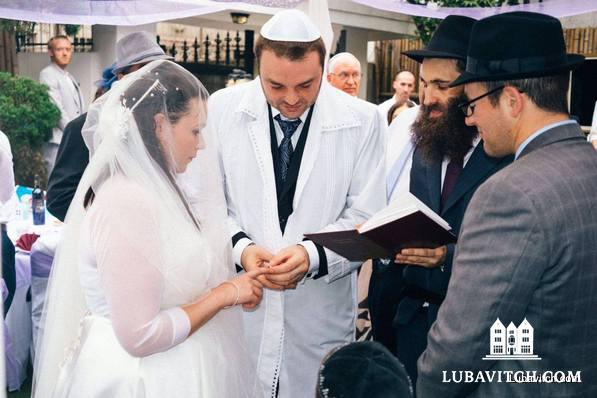 When Rachel and Jeff (Aaron) Czerniak first subscribed to Chabad of Seoul’s mailing list four years ago, they didn’t think much of it. Soon, the Czerniaks, who moved to the South Korean capital from Dublin to teach English, began joining Chabad regularly for Shabbat meals and developed a close rapport with Rabbi Osher and Mussy Litzman, their local Chabad reps. Six months ago, they turned to the rabbi with a request.

“We both don’t have orthodox Jewish backgrounds, but being foreigners here, we connected to Chabad and it felt like a home away from home. When it came time for marriage, we decided Chabad would be our best choice,” said Rachel.

Seoul would get its first traditional Jewish wedding.

“The most intensive work was not the physical preparation of the wedding,” Rabbi Litzman said, “but preparing Rachel and Jeff spiritually.” The Litzmans and Czerniaks spent hours together every Sunday, learning about Jewish life, the Jewish home and marriage. Sometimes, the sessions would last four-to-five hours.

After the learning sessions, the two couples planned the wedding details. “We and the Czerniaks had to create everything ourselves,” Rabbi Litzman explained. From the chuppah to the centerpieces, everything was made from scratch. As for the dinner, Mrs. Litzman, who is used to preparing meals for large crowds, made all of the wedding food herself.

At first, the Czerniaks figured they would host their reception elsewhere as they had a lot of non-Jewish and Korean friends. When Rabbi Litzman heard, “He insisted on having everyone here at Chabad, telling us that all are welcome,” Rachel explained. “They have a lovely garden and there was exactly enough space for our guests with one extra table for anyone who might turn up.”

Seoul does not have a mikveh, but Rachel was determined. A few days before the wedding, she drove out to the beach with Mussy. “It was a beautiful, quiet night, with a soft mist in the air. It was a really, really nice experience,” says Rachel.

Another touching moment for Rachel was the traditional “kallah chair” that the Litzmans had set up for her. “The Litzmans made a “throne” for me, covered in elegant white cloth. As I sat on it, the women came up to me one by one so that I could give them blessings. It was unexpected and really beautiful,” Rachel said.

About a hundred guests including family and friends from Korea and abroad, joined the wedding celebration.