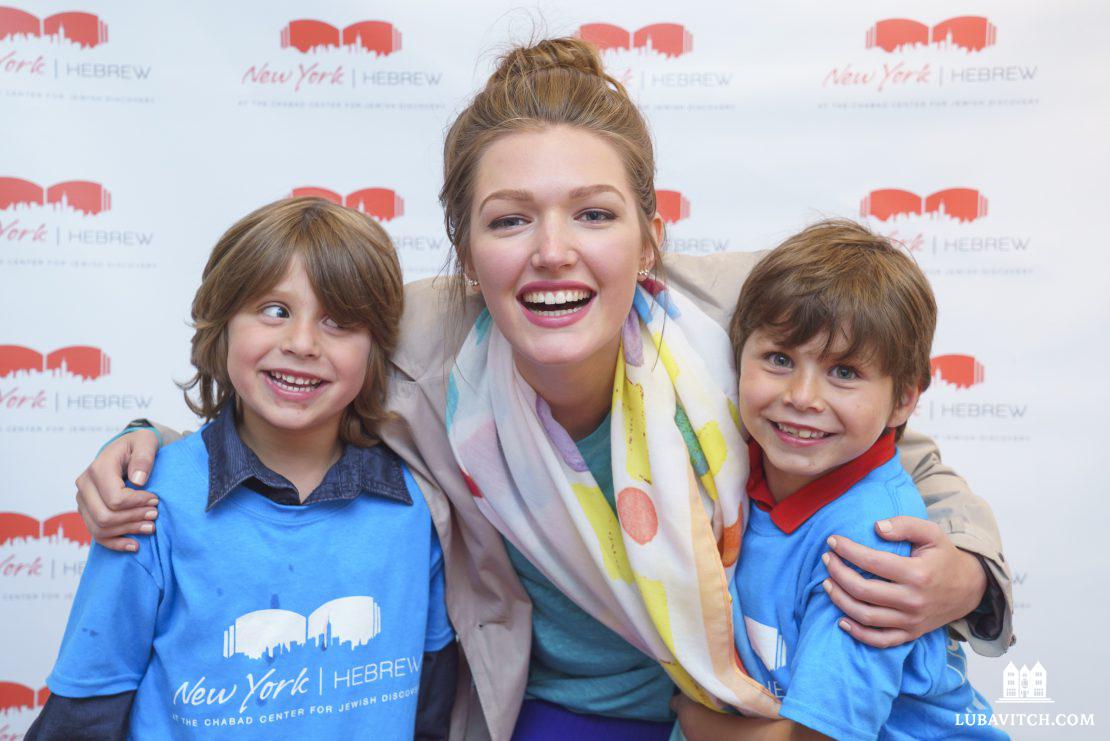 A Hebrew School Becomes A Community

Back to Issue
By Ashira Weiss

Two hundred and seventy-seven people move out of New York City every day. According to the 2018 census data on population flow, the Big Apple leads all U.S. metro areas as the biggest net loser. In the largest and most populous city (8.6 million) in the United States, it is difficult for anyone to find their niche. Many who come to New York City to grow their careers are quick to move on when they’re ready to settle down, making it hard to grow a community in the Big Apple.

The City’s 1.1 million Jews, of which 240,000 live in Manhattan, show similar dynamics. Young Jewish professionals usually opt to raise their children with the support of a close-knit community, away from the frantic bustle of an urban lifestyle.

When Daniel and Jenny Flax got married in 2007, this was exactly what they had in mind. “Our plan was to have kids and go,” Jenny says.

But, thirteen years later, with two children in tow, the couple has planted roots in Manhattan. “We’re not going anywhere,” says Jenny, CEO and owner of Piece of Cake Parties. She and her husband bought a larger apartment, “because we found a community here that we feel part of, and where people care about us.”

In 2011, Rabbi Naftali and Sari Rotensteich, directors of the Chabad Center for Jewish Discovery and Chabad of Gramercy Park, recruited a young couple, Rabbi Mendy and Gillie Shanowitz, with one mandate: New York Hebrew. It would become the Hebrew School that spawned a community.

“Any project that’s given full attention can become a stand-alone institution. With singular focus, the Shanowitzes have shown how far Hebrew School can reach,” says Rabbi Naftali.

At the time, the twenty-five children enrolled in New York Hebrew met once a week at the Center for Jewish Discovery for two hours of Jewish studies. Eight years later, the Shanowitzes run classes in Gramercy, Flatiron, and Chelsea, with an enrollment of 130 children, ages three to thirteen.

The growth at New York Hebrew is not only in the numbers.

“This is not just a Hebrew School, it’s a neighborhood hub,” says Gael Zafrany, a stay-at-home mom whose children, 9-year-old Raviv and 7-year-old Avishai, are New York Hebrew students. Born in Philadelphia, Gael has been living in Manhattan since her college days. When their children came along, she and her husband, Richard Malish, attorney-at-law, looked for a community that would help “set up a Jewish foundation for the kids and give them a real sense of their Jewish identity.”

After visiting other places, they came across New York Hebrew. “Here you have people from different incomes, different levels of religious affiliation, all calling this home,” says Gael. “It’s such a comfortable place, and everyone that comes can feel that.”

How does a school that meets only once a week grow into a community? “We began by building off the Hebrew School infrastructure that was already in place,” Rabbi Mendy explained. “When the first Jewish holiday came around, Hebrew School hosted a program for the students’ families and friends.” Around one hundred people attended that first New York Hebrew Chanukah Balloon Extravaganza. Word spread, and as they introduced more events, more people came, so that a recent event, featuring Holocaust Survivor and Anne Frank’s stepsister Eva Schloss, drew 1,000. “In time, we became an icon among families in the neighborhood,” says the rabbi.

“There are just so many activities, so many reasons to get together,” Jenny, who met two of her closest friends through New York Hebrew, says. “When they began hosting Shabbat dinners, which is a highlight for us, there were just a few of us, and now I look around and see a big, strong community.”

The Shanowitzes now offer their own innovative holiday services. Garbed in thematic costumes, twenty volunteers lead the children through interactive exhibits that bring the holiday stories and prayers to life. It is a far cry from Gael’s childhood synagogue experience. “I remember going to services on Shabbat and counting the ceiling tiles or playing with the lace on my dress. But my kids look forward to going.”

Many synagogue children’s programs are meant to occupy the little ones while their parents are in services, but Gillie has turned that model on its head. “It’s not a babysitting service. It’s a New York Hebrew service, where children are front and center. Parents who may not belong to a synagogue are singing prayers, and hearing the shofar, or eating matzah, along with their children.”

A Gateway to Community

When Ella Mosca was about to enter sixth grade, her mother, Maya a stay-at-home mom, convinced her to try a class at New York Hebrew in preparation for her bat mitzvah. “She went once and loved it,” says Maya. Thursdays at New York Hebrew became a permanent fixture on Ella’s calendar. “They make everything alive, exciting, and relevant.” the proud mom adds, pleased that her daughter is comfortable enough to ask the teachers probing questions.

“It’s not just reading and studying. It’s a conversation and a community. It brings the spirit of Judaism to our family.”

New York Hebrew takes full advantage of the city’s rich cultural and educational resources. At a recent visit to Facebook’s New York headquarters, New York Hebrew students took part in a roundtable discussion about being proud Jews in the age of social media. An encounter with the local branch of Hatzalah—a volunteer EMS corps—was an opportunity to examine the Jewish laws and ethics involved in saving lives.

“They have to make it fun, because the kids have already had a long day at school,” says Jenny, a former teacher herself. “But I have friends with kids in other Hebrew Schools, and the curriculum here is much more rigorously academic than theirs.”

A 2008 study of Jewish supplementary schools by the Avi Chai Foundation found that in the 2006-2007 academic year approximately 230,000 kids in grades one through twelve attended over 2,000 Hebrew Schools in the United States. There is a more than one-third (thirty-six percent) drop in attendance after seventh grade, reflecting the trend to view Hebrew School as a means of preparation for bar or bat mitzvah.

New York Hebrew offers opportunities for continued engagement even once kids reach bar/bat mitzvah. Twenty-five sixth, seventh, and eighth graders make up a volunteer corps, assisting at Hebrew School and holiday services. Friends Sadie and Samara, both 13, help out with the younger children, opting to stay involved in a place that feels like home.

“The Hebrew School makes it so easy to celebrate the holidays,” says Samara. She and Sadie, their 16-year-old sister Chelsea,  along with their parents love joining Gillie and Rabbi Mendy at home for Shabbat dinners. “We want to keep seeing them, even if we aren’t in Hebrew School anymore.”

As the community grows, Rabbi Mendy and Gillie’s vision expands. “My dream is to have a building that’s dedicated to our Hebrew School community,” Gillie says. She envisions hallways with interactive wall art, classrooms with smart boards to enrich the learning experience, a large communal hall, and a child-centered synagogue.

“Hebrew School is underestimated and undervalued in the impact it could have on families,” Gillie says. “Many Jewish philanthropists want to invest in Jewish education, but they feel that Hebrew School is only two hours a week and not a significant cause.”

In one of the world’s toughest cities, where roughly three-quarters of Jews say they have no religious affiliation, New York Hebrew is proving those philanthropists wrong. “Hebrew School is often the only formal affiliation that many families have with Judaism,” says Gillie. “We make those two hours a week bleed into their whole life.”

Related Articles
View All
Education
A Quiet Moment
It is a typical, bustling morning at a middle school in Camarillo, California, and the students are about to take an algebra quiz. But first,…
Education
Remembering Rebbetzin Chana: Jewish Feminine Role Model
Rebbetzin Chana Schneerson, a feminine role model of Jewish activism and proponent of Jewish scholarship, mother of the Lubavitcher Rebbe and wife of Rabbi Levi…
Education
A Jewish School Beyond Borders
Sixth-grader Hadasa Perez has never met her teacher. Or her classmates.   Yet, while parents, teachers, and children around the world are flailing like fish out…
Education
Camp Gan Israel, Sleepaway Edition
55 Attend CKids’ Inaugural Overnight Camp
Get Inspiration to your inbox!
Newsletter
Join our weekly newsletter for inspiration and updates
Donate
Find Your Local Chabad Center
Subscribe
|
Log In
Chabad
About Chabad-Lubavitch
About Chabad Lubavitch
The Rebbe
Headquarters
Magazine
Magazine
News
News & Updates
In The Media
Impact
Social and Humanitarian
Social and Humanitarian
Education
Education
Community
Community