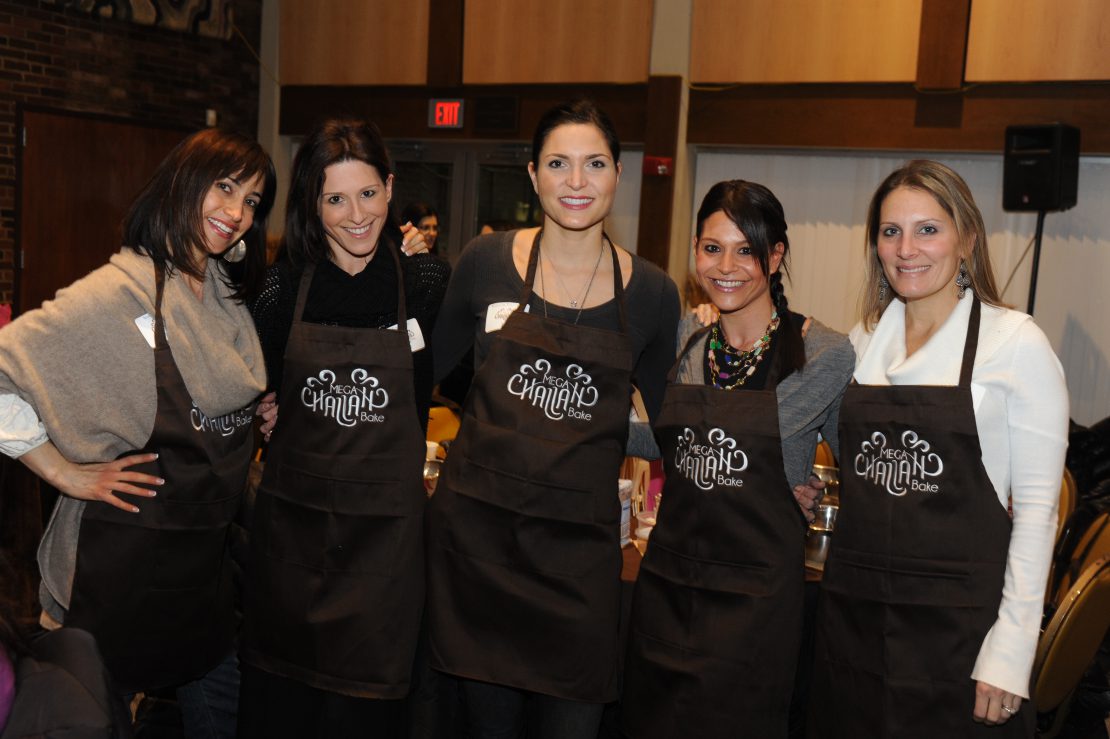 The shopping list shared by four Bostonian Chabad shluchot (women emissaries) last week included 1,000 pounds of flour, 281 cups of sugar, 4.2 gallons of oil, 120 ounces of yeast. But purchasing mountains of baking ingredients from grocery stores across the tri-state area was just the first step of the ultimate challah extravaganza.

On Monday evening, February 3rd, as most New Englanders were staying put waiting out a blustering bitter cold storm, 430 women from every demographic of the greater Boston Jewish community met for a history-making “Mega Challah Bake.” The bakers ranged in age from young professionals in their 20s to grandmothers in their 60s. Rolling up their sleeves, they donned aprons and began kneading the soft dough using pre-measured ingredients.

Challah baking, and, specifically, the mitzvah of “separating challah” or hafroshat challah has been a symbol of the Jewish home since biblical days when Sarah shaped challah loaves in her tent. The mitzvah is observed by separating a piece of the completed dough—the “first” of the dough as an offering to G-d, and acknowledging by a reciting a blessing giving thanks to G-d for providing us with our sustenance, represented by the bread. The small piece is then burnt in the oven.

Different customs have surrounded this hallowed mitzvah for millennia, and today, women are gravitating to the aroma coming from Chabad kitchens everywhere, finding sustenance for body and soul as they bake fresh loaves in the spirit of this ancient tradition.

Mrs. Grunie Uminer of Chabad at Chestnut Hill, one of the organizers of the first collaborative women’s event in Boston says that “the goal was to get a lot of women together and highlight this time-honored mitzvah dating back to our matriarchs.”

“When a woman bakes challah and separates the dough with the blessing, she is bringing additional blessing into her home and into the food that she lovingly prepares for family and friends. It is a time for women to pray for their personal needs, the needs of their families, and their communities. By bringing a large group of women together to bake Challah, in addition to learning a wonderful skill and inspiring unity in our community, our hope was that our joint prayers will be so much more poignant.”

And poignant they were.

“The weather outside was nasty, but inside over 400 women at the same time said the special prayers on the Challah and added prayers for people in need. It was so impactful. I was blown away by the power in the room.  We were a part of the history dating back to Sarah, and we were doing it all together so it added a dimension of joint energy.”

Many of the women who had never before prepared challah warmed quickly to the practice. “The Chabad ladies made it so easy for anyone to learn.” Hornstein says. “I have never baked Challah on my own before, but I feel that now I can.” While she proudly claims that the challahs at her table were the most beautiful braids in the room, she was most impressed with how encouraging the shluchot were in helping more women participate in this mitzvah. “They kept saying ‘you are always welcome to come over and do this with us at anytime.’ It helped make it less intimidating.”

Mrs. Shifra Schwartz of the Chai Center of Brookline reflected on why the women chose to focus on challah. “Women connect to the mitzvah that has been passed down from their grandmothers who have all baked it. It appeals intuitively to the nurturing and result-driven nature of women to be able to create something special and share it with others.”

“We were inspired by other Chabad houses who have done this kind of mega challah bake with amazing success. It has become a cultural event which draws in and unites women regardless of affiliation or synagogue. There is this incredible power when women come together and connect not only to the mitzvah but to each other.”

Mass-scale challah bakes have indeed become a cultural phenomenon of sorts, often with hundreds of Jewish women meeting in Connecticut, Texas, New York, Delaware, Tennessee and Canada. The newfound popularity of this ancient mitzvah may very well be in its homey, nurturing vibes as much as its Jewish cultural relevance.

Mrs. Debra Milgram, a busy mom of four who attended the event, believes that the large turnout has “a lot to do with it being about cooking and baking.”

“No matter what level of observance you are at, Jewish families always have challah and matzo balls!” said Milgram. “It is fun to learn to make a basic thing that unites all Jews. At the challah bake I met so many friends from different circles in my life, and I realized that there is so much more that unites us than divides us.”

Drawing inspiration from the event, Milgram took advantage of a snow day just days later to bake challah with her kids, though “it’s not something I regularly do.”

Chabad of Needham’s Mrs. Chanie Krinsky who bakes challah weekly, said that they had originally hoped for 360 women to participate, but numbers just snowballed. The organizing committee took spent hours the day before pre-measuring ingredients into little individualized containers and arranging personalized recipe cards and aprons. Topping stations for challahs, an auction, and braiding stations where women could learn sophisticated techniques from challah experts made the experience educational on many levels.

Allison Mael who attended the event with her daughters, noted that “the incredibly well organized, elegant evening was also very spiritual. It was simply an amazing experience.”

Krinsky notes that Mael’s reaction was shared by nearly every participant and the feedback has been “unbelievable.”

“I have had so many people come up to me and say ‘I’ve never made challah before,’ ‘look at the unity in this room,’ or ‘I’m going to try to bake challah every Friday with my daughter from now on.’ It really struck a chord with people.”

The Mega Challah Bake was hosted jointly by Chabad of Chestnut Hills, Chabad Chai Center of Brookline, Chabad Newton Centre and Chabad of Needham, as well as other local Jewish institutions.