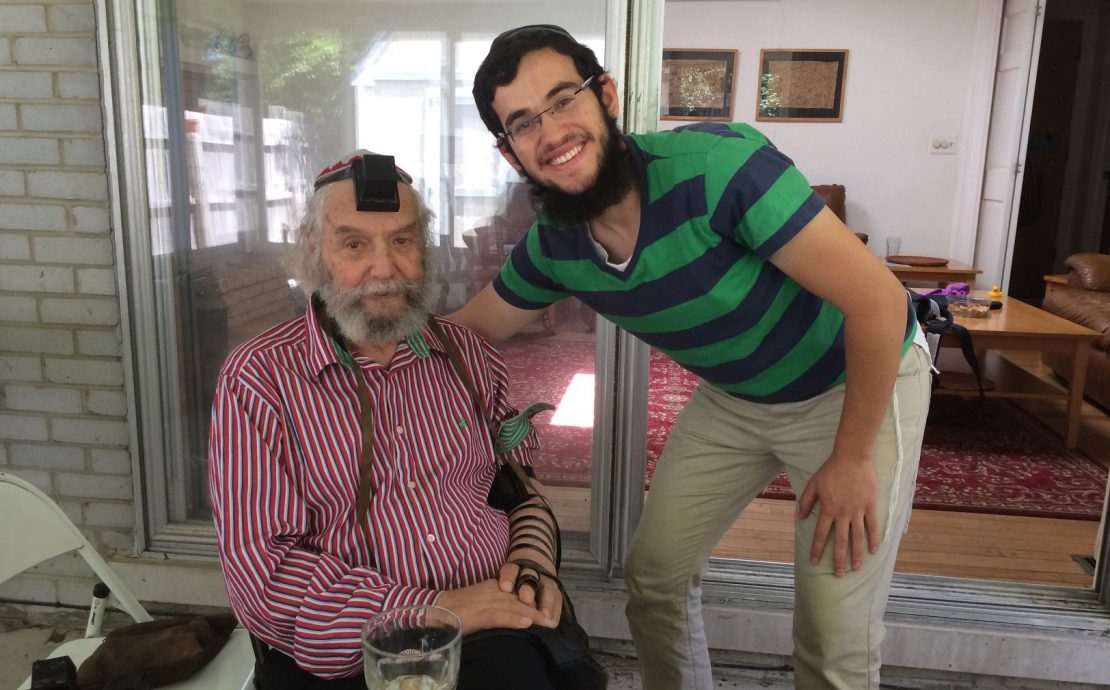 Frithjof Bergmann wraps tefillin for the first time in his life, helped along by Rabbi Mendy Rimler

The second in our Jew Meets Jew series:

Frithjof Bergmann, an 83-year-old Holocaust survivor, is a professor of philosophy at the University of Michigan. An avid student of anthropology and the human experience, the author and lecturer, well-versed in Judaic ritual, enjoyed chatting with Rabbi Mendy Rimler at an Ann Arbor dinner party this summer.

Rimler, a Chabad shliach who helps run the Chabad on Campus at Arizona State University, was visiting Ann Arbor at the time, and invited Bergmann to don tefillin. It would be a first for this octogenarian, and Rimler was thrilled to help him get “Bar Mitzvahed” while learning of his fascinating and haunting past.

Bergmann was born in Berlin, Germany to a Jewish mother and non-Jewish father just as the Nazis were coming to power. His parents, fearing the growing danger, escaped when he was just a baby to Austria, a move Bergmann describes as going “from the frying pan into the fire.” The Bergmann family ended up moving to a remote Austrian mountain village, a landscape of goatherds and peasants, straight out of the pages of Heidi.

“The Nazi’s persecution of the Jews in these small mountain towns was actually quite inadequate from their perspective,” Bergmann reflects, “which meant I grew up with my four siblings during the time of the Nazis, and for a very long time they didn’t touch us.”

But the false sense of security didn’t last, and one afternoon the Gestapo arrived at Bergmann’s home with the local police, waiting to take Frithjof’s mother to the concentration camps. At the time Mrs. Bergmann was at the dentist, some 25 miles away, and the local police convinced the SS officers to return the next morning for her pickup.

“Once my mother returned from the dentist, the whole family sat down and concocted ideas for how to save her,” Bergmann explains. In the end, Mrs. Bergmann made up a false identity as a nurse and donned an old nurse uniform she had from her time serving during World War I. The family then staged her suicide in a nearby lake. When the Gestapo came in the morning they found a family stricken with grief over an apparent suicide, and no trace of Mrs. Bergmann.

“My mother got out on the same train she was supposed to go to the concentration camps on,” Bergmann continues, explaining how she switched trains as often as she could and ended up in a German city, where she miraculously lived out the rest of the war under her false identity, nursing American prisoners of war back to health. Back in the Austrian mountain town, Frithjof’s father was imprisoned. With no caretakers, and the brutal atmosphere, the Gestapo “figured we’d die anyways,” says Bergmann, and so the five children were left “to our own modes of survival.”

And somehow, miraculously, they all did.

The post-war period saw the whole family reunited, though never quite the same, as the damaging effects of war took their toll. Frithjof eventually continued his schooling in an Austrian gymnasium and in 1950 wrote an award-winning essay which gained him a scholarship to study in the United States.

His studies and experiences eventually led him to advanced academic pursuits and he began a long career in his chosen field of philosophy.

Though his upbringing was not one of a practicing Jew, his childhood experiences left him no choice but to identify with the very reason his family was being persecuted.

“I never had a Bar Mitzvah, or any other Jewish milestone.” Bergmann admits. “That wasn’t something I experienced. But I still knew I was Jewish. My mother made sure that Judaism came across, if not overtly than subtly and indirectly. We didn’t practice many Jewish rituals but the ambience, the spirit, my mother’s whole attitude, was Jewish at its core.”

That’s why when Rabbi Rimler turned to him and asked him if he would put on Tefillin, Bergmann says “it never occurred to me to say no.”

“As a professor, I have an added interest in cultural rituals, all of which fascinates me. But this – it is a part of me.”

On the warm summer day, Bergmann wrapped the Tefillin straps around his arm, and said the Shema prayer word for word after the Rabbi.

And for all his academic understanding of what he describes as a cultural ritual from an intellectual perspective, he had to admit that the experience left him changed.

Related Articles
View All
Jew Meets Jew
Simon Gronowski, 82, never wrapped tefillin. Orphaned, with no parents or siblings before he turned 13, he had no bar mitzvah. Now he was reluctant.…
Get Inspiration to your inbox!
Newsletter
Join our weekly newsletter for inspiration and updates
Donate
Find Your Local Chabad Center
Chabad
About Chabad-Lubavitch
About Chabad Lubavitch
The Rebbe
Headquarters
Magazine
Magazine
News
News & Updates
In The Media
Impact
Social and Humanitarian
Social and Humanitarian
Education
Education
Community
Community