A Conversation With Mr. Sam Rohr 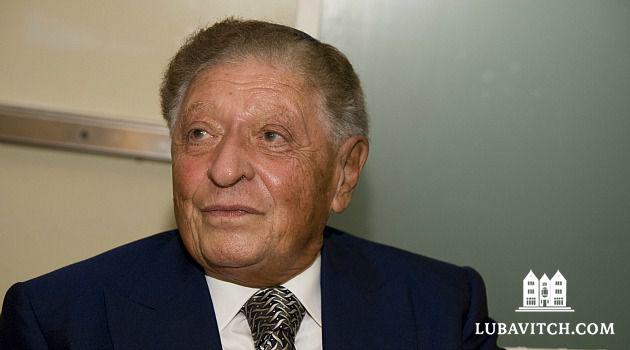 THE ROHR FAMILY FOUNDATION is synonymous with Jewish outreach around the world. Its philanthropic largesse is translated into the bricks and mortar of Chabad centers, shuls and schools worldwide, and in myriad educational initiatives reaching children, college students and adults through the international network of Chabad-Lubavitch. The resources dedicated by the Rohr Family Foundation are affecting perceptible progress in Jewish literacy and have remarkably altered the global Jewish experience of recent years.

MR. SAM ROHR, patriarch of the family, grew up in Berlin. After Kristallnacht, he and his parents left for Antwerp, and eventually fled to Switzerland where they spent the remainder of WWII. Mr. Rohr later moved to Bogota, Colombia, where he became a leading real estate developer and one of the leaders of the Jewish community. He and his wife, Charlotte, were married in 1953, and raised their three children in Bogota.

On the occasion of his 80th birthday, Mr. Rohr talked with Lubavitch International.

The Rohr Family contributes substantial funds in support of the work of Lubavitch around the world. Why Chabad-Lubavitch?

During my lifetime I have contributed fund to many different institutions. I found that Chabad spends my money more efficiently than all the others. As my son George says, “We get far more bang for the buck through Chabad than through anybody else.”

How do you assess the return on your investment thus far? What do you look for in determining whether you are getting the results you want, from your contribution?

The return on our investment has been fabulous. We started with Rabbi Yehoshua Binyamin Rosenfeld in Bogota, Colombia, and he changed the whole city. He participates in every simcha in the local com­munity. And chas v’chalila (G-d-forbid] at times when things are not so good, he stands at their side.

Bogota was only the beginning. Practically everywhere else we also have wonderful results.

What places and or projects, in the work of our Shluchim, are closest to your heart?

I grew up in Germany, where Judaism was completely destroyed. When I see today that, for example, in an old synagogue in Dresden, Jews under the leadership of Rabbi Schneur Havlin, the Lubavitcher shali­ach there, are again davening, my heart starts beating a little quicker.

Jewish continuity is an all time favorite subject for the Jewish media. Everyone seems to agree that ignorance and lack of education are the culprits. Do you think that maybe we aren’t seeing the whole picture? ls there perhaps something we are missing, other less obvious influences, that threat­en our continuity as a people?

Jewish continuity depends on the behavior of our generation. When you see a completely secular Jew who did not have the benefit of any Jewish education, who nonetheless loves Israel and is interested in Jewish continuity, you can be sure that his grandfather or great-grandfather put on tefillin every day. Where there was no such grandfather there is no such secular Jewish grandchild. Sadly that child has long forgotten that he is Jewish.

My vision for the future of Jewish life is a nation of Jewishly well-educated Jews, who keep mitzvot and are also economically self-sufficient. One of my main worries is over Jews who do not leatn a trade or profession that enables them to earn a parnassa [living]. Take Bnai Brak. It is the poorest town in Israel. The Jewish ideal is not poverty.

You’re celebrating your 80th birthday this year. Mazel tov, and may you be blessed with many more, in good health. This puts you in the mishnaic category of ben shmonim l’gwrah (80 as a sign of special strength). What are your thoughts on this achievement?

When I think about shmonim l’gvurah, my fervent hope is to become ben me’ah, [one hundred] but not, as the Mishna puts it, ” … ke’ilu met v’avar uvatel min ha’olam,” [as though he is dead and passed away from the world] but rather, “ben me’ah l’binah,” like a forty year-old!

What single memory or experience of your life, has had a transformative, or enduring impact on you or your ideas?

The war years and the loss of so many members of.my family, especially my grandfather of blessed memory whom I loved very much, and who was simply shot in the street in Lvov.

You’ve seen radical transformations in just about every sphere of life. Would you say we are in a better place, as a result?

There is no question in my mind that we are now in a far better place than before. Never before in history­not even at the time of the second Beit Hamikdash [Temple]-were there as many Jews learning Torah as there are today. And while the general consen us is that the great talmidei chachamim [Torah scholars] are mostly dead, it is my firm conviction that in terms of sheer numbers, there were never as many truly knowledgeable talmidei chachamim in any previous generation as in ours.

I am inspired when I see, in a kindergarten in Latvia, four-year-old Russian-speaking kids  recounting the stories of Avraham, Yitzchak and Yaakov.

You’ve built a successful life, and have raised children and grandchildren who follow in your path. Tell us please, what principles guide you, and what you would say to others hoping to achieve the same.

The day before my Bar Mitzvah my father, who at the time was one of the leading real estate men in Berlin, explained to me that wealthy Jewish families can only maintain their wealth by giving ma’aser kesafim [tithes from monetary gains]. He cited the example of the Rothschilds, who, even if they might not all always have been shomrei mitzvos, [observant of mitzvot) still today give enormous amounts of tzedaka-and as a result they kept their wealth, while many other Jewish families who were even wealthier than the Rothschilds simply disappeared.

The day before his Bar Mitzvah, I told this to my son George. My grandchildren have also received this advice, and I pray to Hashem that they will follow it.