A Bar Mitzvah in Brooklyn 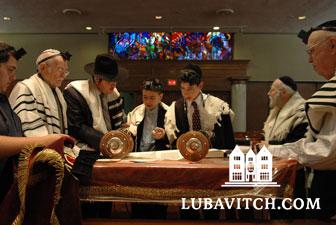 Alex reads from the Torah as family members and rabbis look on.

A bris, a death, a bar mitzvah. Here's a story about a Russian Jewish family, and an organization that holds their hands, walking them them through life cycle events, the Jewish way.

Monday morning, at a shul in Mill Basin, Brooklyn, a Russian Jewish boy was called to the Torah in honor of becoming a Bar-Mitzvah.

Alex Tkach, still raw from his father’s passing three weeks ago, donned tefillin like his dad did shortly before his death, with the help of Rabbi Dovid Okunov.

Igor spoke to Rabbi Okunov of wanting to strengthen his Jewish commitment, and “he specifically expressed his desire to be careful about eating kosher.” He was concerned, says Okunov, that his son learn to live more fully as a Jew.

In his remarks to Alex and the guests, Rabbi David Halpern, spiritual leader of the Flatbush Park Jewish Center, spoke glowingly of the work of Lubavitch around the world and especially in the former Soviet Union, where he recently visited.

F.R.E.E.’s relationship with Alex’s family began when they arrived to the United States after the fall of communism in 1991. Thirteen years ago, when he was an eight-day old infant, Alex had his bris through F.R.E.E.

To learn more about F.R.E.E. visit their website at www.russianjewry.org